Is Saipov considered white or a person of color by Americans? [closed]

Ask Question
Asked 4 years ago
Active 4 years ago
Viewed 342 times
-3
Closed. This question is off-topic. It is not currently accepting answers.

Amongst Americans, either of the left-wing variety or right-wing variety, who categorise people as being "white" or "persons of color", which category do they put Sayfullo Saipov in, and what rationale do they use for their categorisation?

Does being Muslim affect which category he's put in?

I won't try to guess what American people as a whole would do (there's about 300 million Americans and each one is an individual). Instead, I'll point you to the offical categories for ethnic origin, used by the US census, which are derived from the OMB standards on Race and Ethnicity.

White – A person having origins in any of the original peoples of Europe, the Middle East, or North Africa.

Asian – A person having origins in any of the original peoples of the Far East, Southeast Asia, or the Indian subcontinent including, for example, Cambodia, China, India, Japan, Korea, Malaysia, Pakistan, the Philippine Islands, Thailand, and Vietnam.

Uzbekistan, along with Kazakhstan; Kyrgyzstan is generally considered to be part of the Middle East, and hence white.

Religion is not part of the official categories, and the census allows for self-identification, and for an "other" category, with write-in.

I'll also note that there is a plan to add a category for Middle Eastern and North African (MENA) in the 2020 census.

The modern Uzbek population represents varying degrees of diversity derived from the high traffic invasion routes through Central Asia. Once populated by Iranian tribes and other Indo-European people, Central Asia experienced numerous invasions emanating out of Mongolia that would drastically affect the region. According to recent genetic genealogy testing from a University of Oxford study, the genetic admixture of the Uzbeks clusters somewhere between the Iranian peoples and the Mongols. (Wikipedia)

Mongols are considered Asian; Iranians are technically speaking "white" (it's complicated, but the ethnic Persians mostly self-identify as white, both in Iran and for most part in USA. Let's not forget that Persians are the original Aryans :).

As such, any ethnic Uzbek could be considered either white or asian.

White and non-white in the United States is usually based on ethnicity instead of skin color from a public perspective, though of course this varies some from person to person. I can't find any surveys on this in particular, but I would wager that the average person who would have this sort of discussion would say a greek national is white and a turk non-white, though their skin tones and geographic origin may be quite similar.

That said, pretty much no one in the United States knows central asia exists. The graph below shows how often united states individuals searched for a particular country's name 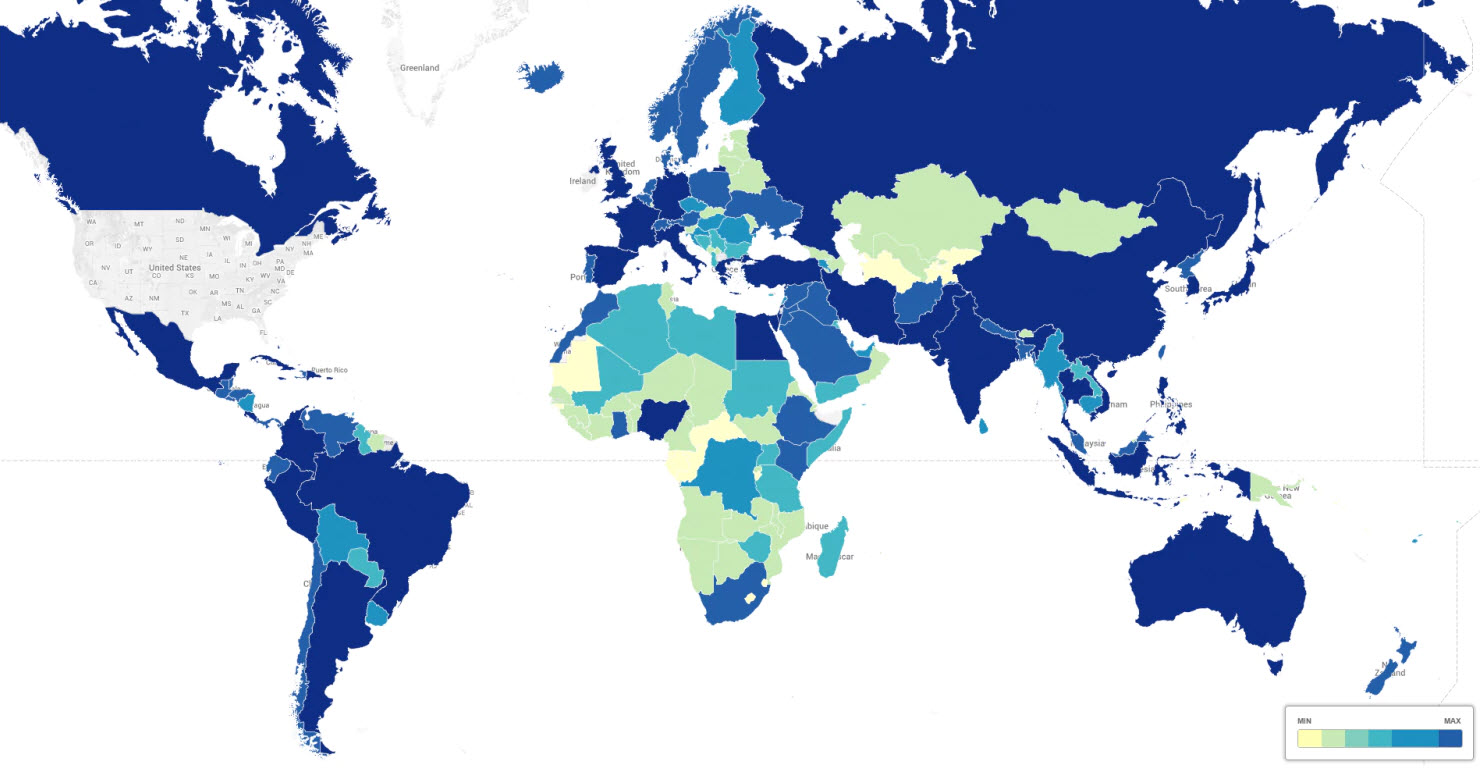 Notice that central asia is the least searched besides a handful of african countries. I'd personally wager the only reason Kazakhstan is colored at all is because of the commercial success of Borat. It would seem that americans consider slavic peoples white, but would not consider the middle east to be white, nor would they consider asia to be white. Given a photo of Saipov and the background knowledge that he is pledged to ISIS most americans would probably place him as non-white, but perhaps the more pertinent question is asking whether americans consider central asian nationals (uzbeks, tajiks, etc.) white. The answer is: most likely not.

Not the answer you're looking for? Browse other questions tagged united-states religion racism .

2
How does Prejudice Plus Power apply to third party minorities?
47
Why aren't Republicans more focused on mobilizing a movement towards 'dethroning' Trump?
4
In terms of US politics, has protecting taxicab operations from competition been a left-wing policy?
11
How does one parse the notion of "systemic racism" in the context of poverty?
11
Is there any reason to believe that face masks increase the risk of racial profiling?
1
Has Pakistan's Federal Ministry for Human Rights condemned the treatment of Muslims in China?