What does this symbol (Turkish coat of arms) mean?

Can you tell me what the symbol below means? I would like to know more about it. Tell me everything about every one piece. 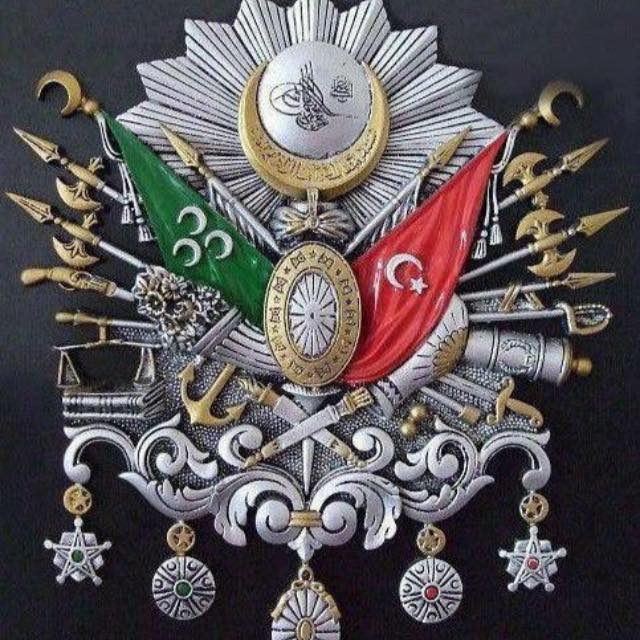 This is a variant of the Ottoman Empire's heraldic coat of arms, adopted in 1882.

It included two flags: the red flag of the Ottoman dynasty with a star and crescent, and the green flag of the Islamic caliph, largely obscured by a cornucopia.

Behind the flags are a number of spears and other weapons.

Hanging beneath the lower flourish are the medals of five of the Ottoman decorations, the depiction of which vary greatly between sources.

I also found an article here (Google Translate, assume that "arming" and "army" are being mistranslated and refer to choosing "arms" in the heraldic sense) which indicates that Turkey has recently (Nov 5th) set up a commission to design new state arms, which it apparently hasn't had since the end of the Ottoman Empire. Per Google Translate, the article describes the old arms as:

The famous coat of arms used in the Ottoman Empire was removed by the end of the reign. Arma, also known as the "Ottoman State Order", was founded on April 17, 1882 by Sultan II. It was put into effect by Abdülhamit. From the two banners in the Arma; the "Ottoman dynasty" with the moon-star on the red floor, and the "Islamic caliphate" in the green zone. Libra, "Ottoman justice", books on the balance of the source of justice "Ottoman laws and Kur'an-ı" represented.

Not the answer you're looking for? Browse other questions tagged turkey symbols .

27
Why does Turkey suppress Kurdish culture?
28
What is this symbol doing on Donald Trump's podium?
17
What is this blue badge that Prime Minister Shinzo Abe likes to wear?
8
Does the 16th April Turkish referendum result actually have any meaningful effect?
8
Why does Turkish president Erdoğan feel so threatened by exiled cleric Feytullah Gülen?
15
Are there some detailed accounts of how the post-2015 Turkish purges happen?
4
Does the M4 highway in Syria reside entirely in the initially announced Turkish "safe zone"?
17
Why is Recep Tayyip Erdoğan allowing the Turkish Lira to plunge?