What would happen if a US president was put in prison?

What would happen if a sitting United States president was put in prison? Could such a thing even happen? Would he be removed from office before this, or could he even be sentenced for anything?

Also, would this affect the pension he gets for being president?

I guess this question overall is: what would happen if the US president was charged with a crime that would get him jail time?

As your third sentence hints at, it's extremely unlikely to impossible that a sitting president would be convicted of any crime outside of impeachment procedure (at the successful conclusion of which the person would, of course, no longer be a sitting president but a random citizen).

Please note that there's no definitive consensus on this (including the only real way it can be conclusively resolved, by a SCOTUS decision).

Additionally, there are 3 different types of judicial proceedings and the answer for them would be different:

Regarding pension: legal opinion seems to be that in, most cases outside Code 8312 (sedition, rebellion, treason) the pension of a person fired from Federal Government remains.

It would seem nearly unbelievable that the President would let it go so far that he actually went to prison. Although it would undoubtedly be unpopular politically, if a sitting President were actually convicted of a crime he could pardon himself as soon as the guilty verdict was announced.

Let's consider a concrete case: Richard Nixon. Before the Watergate scandal broke, Nixon was wildly popular. In the 1972 election, he got 520 electoral votes, to 17 for George McGovern. The popular vote wasn't quite so one-sided, but still won the popular vote by the largest margin in US history. Pre-Watergate, Nixon had to look about as close to unimpeachable as any president in history.

Shortly after the 1972 election, however, the Watergate scandal broke. Here's what happened to Nixon's approval ratings: 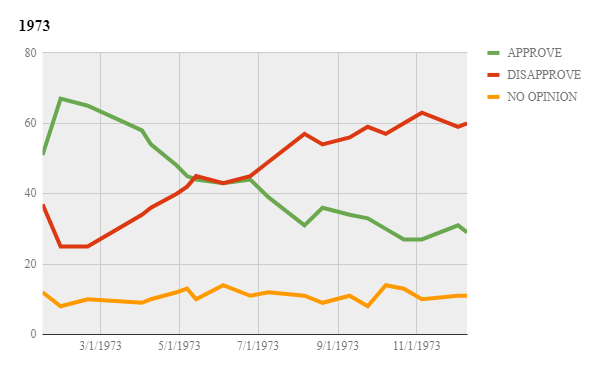 Although he resigned before he could be impeached, by the time he resigned his approval ratings had dropped to the point that there was no longer any real question that impeachment proceedings would not only have proceeded, but would have undoubtedly resulted in his being removed from office.

To make a long story short, almost regardless of how popular a president started out, when enough evidence became public to uphold a conviction, it's almost inevitable that his approval would have dropped to the point that he'd be impeached and removed from office first. As such, there is essentially no possibility of a sitting president being convicted of a crime.

If a sitting President were actually jailed and was unable to perform his or her duties, this is covered in Amendment 25 of the US Constitution; basically the vice president would become Acting President with a bit of paperwork. This could be a temporary thing or a longer-term thing.

It's exceedingly unlikely that this would happen in America, as the DOJ has officially stated that the President is effectively immune from prosecution during his/ her tenure, but in theory this is not binding to state or municipal-level law enforcement/ justice systems (in practice, it would be almost impossible for an American local government to effectively jail a sitting president). If the charges the President were not ahem Trumped up (see what I did there?), it's likely such illegal behavior would warrant and ultimately drive an impeachment by Congress and a conviction by the Senate... at which point the Vice President would become the new President.

Please note we're still talking about American jails. It gets a little weirder if the president goes to another nation and is arrested, charged, convicted, and imprisoned. Most traveling heads of state are granted blanket diplomatic immunity, but depending on the politics involved, that may not be as protective as one might expect. In such a case, the 25th Amendment would certainly come into play.

8
What would happen if the President of the USA actually shot someone?
23
Can a United States President issue a self-pardon?

5
What happens if the Chief Justice refuses to give the oath of office to the President of the US?
4
Is there any European leader that apologized to people in jail for a certain law?
18
Was Bill Clinton charged with a crime by the Justice Department, and why would the same reasoning not apply to Trump if so?
3
What would happen if the President in America was convicted by the Senate after being renominated?
15
Would Mike Pence become President if Trump was impeached and removed from office?
4
Would Trump lose his former President benefits if he's convicted in the impeachment trial?
7
Constitutionally, what would happen if the Icelandic President is convicted of a criminal offense?