Is there a clear statement from the DUP on their position on the post-Brexit border with Ireland?

The UK-EU Brexit negotiations on the 4th December 2017 have ended without any clear progress reportedly in part because the Democratic Unionist party (the DUP, who are supporting the Conservative minority government) have objected to language in a draft deal which implies a special quasi-EU status for Northern Ireland.

The DUP campaigned for a leave vote during the Brexit referendum. However, during the 2017 General Election campaign the DUP manifesto made a number of statements on their position including the following points

It's not clear to me from this whether they support the current soft border and customs union with EU, and thus want the whole of the UK to remain within the common market, want a hard customs border with freedom of movement for Irish and UK citizens, or want something a lot more a la carte. Is there a more recent statement of the party's precise position, preferably including concrete proposals?

The DUP made its position reasonably clear at a press conference on 4 December 2017:

DUP leader Arlene Foster has told a press conference her party "will not accept any regulatory divergence that will separate Northern Ireland economically or politically from the UK".

Conversely, the Good Friday Agreement rules out a hard border between NI and the Republic of Ireland.

The logic of this position suggests the DUP will only accept a soft Brexit -- in which, at a minimum, the UK remains within the EU customs union so that goods may pass over the NI border without checks. (The UK government has suggested a physical border may be replaced by advanced technology, but the proposed solutions have met with skepticism, and are unlikely to be acceptable to ROI and other EU governments.)

If the Conservatives want a hard Brexit (as they insist they do), they will need support or at least abstentions from the Labour party to get it through the House of Commons. (Other parties including the Liberal Democrats and SNP are staunchly opposed to Brexit in any form.)

It's worth emphasising the DUP is the Democratic Unionist Party. Its existence is founded on the idea of NI as an integral part of the UK, and opposition to any form of unification between NI and ROI. So its rejection of special status for NI is almost certainly non-negotiable.

The DUP's leader, Arlene Foster, made this statement 4th December 2017:

"We have been very clear. Northern Ireland must leave the EU on the same terms as the rest of the United Kingdom.

We will not accept any form of regulatory divergence which separates Northern Ireland economically or politically from the rest of the United Kingdom.

The economic and constitutional integrity of the United Kingdom will not be compromised in any way.

Her Majesty’s Government understands the DUP position. The Prime Minister has told the House of Commons that there will be no border in the Irish Sea.

The Prime Minister has been clear that the UK is leaving the European Union as a whole and the territorial and economic integrity of the United Kingdom will be protected.

We want to see a sensible Brexit where the Common Travel Area is continued, we meet our financial obligations, have a strictly time limited implementation period and where the contribution of EU migrants to our economy is recognised in a practical manner.

The DUP have always been the party of no (see image below). They consider Northern Ireland to be fully British, and not at all Irish.

The border between Northern Ireland and the Republic of Ireland has always been something of a bandit country... where fuel smugglers and IRA snipers lurked. Most people living there are Irish nationalists, and so the possibility of some sort of physical border between the two realms would be appealing to the DUP for various reasons: rule of law, security, and territorial integrity.

They and their constituents have become increasingly concerned with what they see as the creep of Irish nationalism. The 2012 flag protests, for example, were a loyalist reaction to what was perceived as a cultural war against British identity. Brexit has become riddled with identity politics, as the DUP regard the EU as being synonymous with political interference from Dublin.

If Northern Ireland stayed within an EU economic zone, it would mean that the Republic of Ireland would get a say on the laws regulating business in Northern Ireland, which for the DUP would be intolerable under any circumstances.

Northern Ireland becoming a special economic zone would benefit Northern Irish people; Catholic and Protestant, as it'd create unique opportunities. But for the DUP Brexit is not a question of economics, it is instead about Northern Ireland's existence and the threat of a united Ireland in any shape or form. 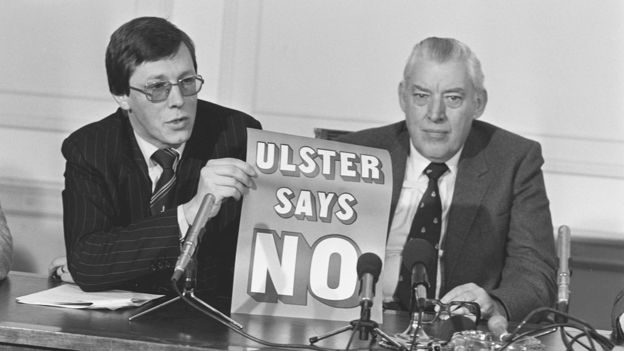 An image as relevant now as when it was taken. The DUP's late leader, Ian Paisley (right).

Not the answer you're looking for? Browse other questions tagged brexit northern-ireland democratic-unionist-party .

18
What Brexit solution does the DUP want?

12
Why are left-wing unionism or right-wing Irish nationalism unsuccessful in Northern Ireland?
14
Why is having border controls in Ireland so problematic for Irish nationalists?
16
What treaties or (written) agreements would a hard border in Ireland breach, post-Brexit?
8
Can the UK deal selectively with Ireland post-Brexit without falling afoul of WTO rules?
14
Would it be plausible to solve the Irish Border issue by unifying Ireland?
5
A vote on the Brexit backstop
2
Among all parties in Parliament, is there sufficient support for a hard border in the Irish Sea?
52
What do hard-Brexiteers want with respect to the Irish border?
5
Will the DUP agree to a Northern Ireland Referendum?
38
Why is the UK so keen to remove the “backstop” when their leadership seems to think that no border will be needed in Northern Ireland?