What is the political/economical justification for the existence for import duty? Is this purely a form of protectionism? Or are there other reasons as well? (Been thinking about something along the lines of the loss of income taxes from the workers or something like that)

As SE is a Q&A site, let me answer my own question. In classical economics import duty is indeed seen as a form of protecting the internal market and even as form of independence declaration politically, which by neoclassical economists is seen as a distortion of the free market. Below I will quote from wikipedia the justification for the following, but in the end it can be economically understood that there is a gain called the terms of trade gain which is the economic gain from the internalization of some goods in the internal market which has to be bigger than the efficiency loss induced by the import duties (basically the protectionism). This gain, if I understand it correctly, depends on every specific market and there is no universal gain which is true for every single market.

In order to prevent link rot:

The diagram to below shows the costs and benefits of imposing a tariff on a good in the domestic economy, Home. 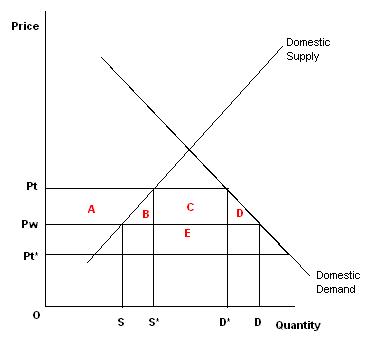 When incorporating free international trade into the model we use a supply curve denoted as Pw. This curve makes the assumption that the international supply of the good or service is perfectly elastic and that the world can produce at a near infinite q S amount of the good, but had a demand of D. The difference between S and D, SD was filled by importing from abroad. After the imposition of tariff, domestic price rises from Pw to Pt but foreign export prices fall from Pw to Pt* due to the difference in tax incidence on the consumers (at home) and producers (abroad).

At the new price level at Home, Pt, which is higher than the previous Pw, more of the good is produced at Home – it now makes S* of the good. Due to the higher price, only D* of the good is demanded by Home. The difference between S* and D*, StD* is filled by importing from abroad. Thus, imposition of tariffs reduce the quantity of imports from SD to SD.

Domestic consumers face a higher price, reducing their welfare. Consumer surplus is the area between the price line and the demand curve. Therefore, the consumer surplus shrinks from the area above Pw to the area above Pt, i.e. it shrinks by the areas A, B, C and D. The government gains from the taxes. It charges an amount PtPt* of tariff for every good imported. Since SD goods are imported, the government gains an area of C and E.

or graphically, this gain is given by the areas shown by:

that is, tariffs are beneficial to the society if the area given by the rectangle E more than offsets the losses shown by triangles B and D. Rectangle E is called the terms of trade gain whereas the two triangles B and D are also called efficiency loss, as this cost is incurred because tariffs reduce the incentives for the society to consume and produce.

The model above is completely accurate only in the extreme case where no consumer belongs to the producers group and the cost of the product is a fraction of their wages. If instead, the opposite extreme is taken by assuming that all consumers come from the producers' group and that their only purchasing power comes from the wages earned in production and the product costs their whole wage, the graph looks radically different. Without tariffs, only those producers/consumers able to produce the product at the world price will have the money to purchase it at that price.

Is this purely a form of protectionism?

There are three reasons for trade tariffs:

Not the answer you're looking for? Browse other questions tagged taxes .

2
Why are Anglophone right-wing working class discourses fixated on taxation, state expenditure, and the state generally?
12
Why do we collect taxes on income from labor?
44
Why does the US require non-resident citizens to file taxes even for non-US income?
201
Why doesn’t the IRS just send me a bill for the taxes I owe based on the info they already have?
6
Any problems with zero corporate income tax?
15
How could a wealth tax (not income tax) be implemented to make evasion difficult?
21
What is the logic behind charging tax _in the form of money_ for owning property when the property does not produce money?
4
More Than 40 Years Later---1040 Capital Losses are Still Capped at $3000 (Politically, Why?)