Did most French people change their opinion about who contributed most to the defeat of Nazi Germany?

Did most French people change their opinion about who contributed most to the defeat of Nazi Germany? It seems implausible, but I have found many sources citing this image: 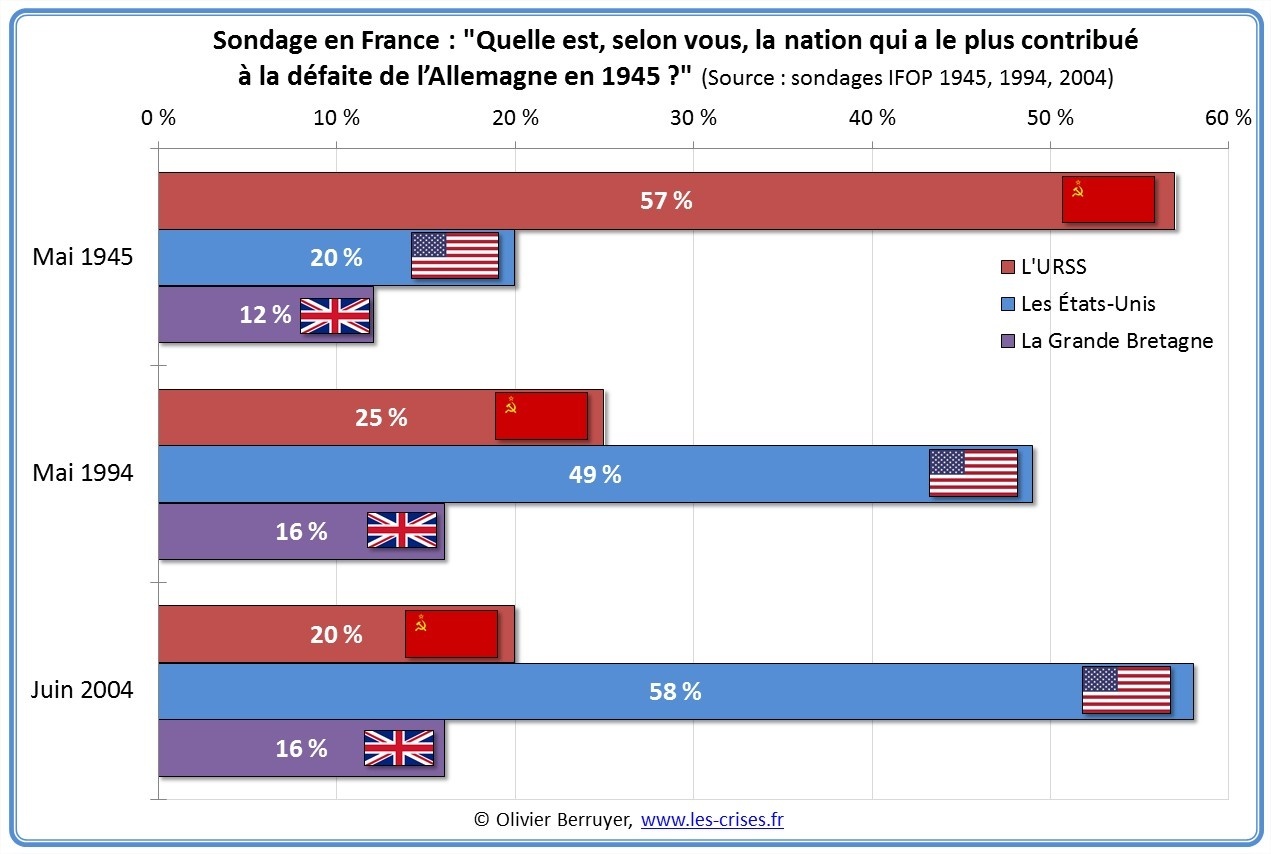 The title translates to: Survey in France: "in your opinion, which country contributed most to the defeat of Germany in 1945?" With the options from top to bottom: the USSR, the USA, or the UK. The image claims that in 1945, 57% of French respondents thought the USSR contributed the most. In 1994 and 2004 opinion shifted to thinking the USA contributed the most with 49% and 58% of respondents giving that answer, respectively.

If this is true, is it uniquely French or do other countries follow a similar pattern in change of opinion?

In short, yes the information presented in that graphic is well sourced and appears generally reliable.

The creator of the graphic is Olivier Berruyer who is French political blogger. His source is IFOP, a well established French polling company, with a history dating back to 1938. Olivier includes in his blog an image of a 1944 newspaper containing the summary of the poll.

Opinion polling in 1944 was not as sophisticated as today, and one should treat the exact values with a little skeptisim - France in 1944 was not the easiest place to poll, however this question was asked twice, once in Paris, and then countrywide (including regions that had been under Vichy) with the same general result. Most French people in 1944 believed that Russia had contributed most to the defeat of Germany.

When the same question was put again in 1994, most French people believed that the USA had contributed most.

There is a small subtlety in the original poll, It found that in 1945, most French people believed that the USA had contributed most to the liberation of France. It also notes that it the UK, in 2015, a majority feel that the UK contributed most.

To explain this change, first note that in 1945 the events of the war were recent and ongoing. French people were not answering from their knowledge of history, but their knowledge of current affairs. The massive loss of life on the Eastern Front was well known. France was allied to the USSR and people tend interpret the actions of allies more favourably.

In 1994, the war was history, and History as taught in schools tends to focus on what is of most interest: the history of our own country. It is no surprise that schools should do this, in fact it is almost inevitable, but it can lead to distortions. French people see world war 2 through the prism of French history, and therefore the key events of the war are seen to be the occupation and subsequent liberation of France. Many people also get their historical knowledge from popular culture and films, which being made in Hollywood tell the story of America's involvement in the war. So now when asked "Which country contributed most to the defeat of Germany", people actually answer the question "Which country contributed most to the liberation of France?", and so give the same answer that they gave in 1945: The USA was the biggest contributor to the liberation of France.

To summarize: The graphic appears to be correct. The reason for the change is the change in the relationship between France and USSR/Russia and the natural focus on French history by French people.

Not the answer you're looking for? Browse other questions tagged public-opinion france soviet-union world-war-ii nazism .

6
What is the opinion of people of Japan about Article (9)?
3
How are people in Germany educated about crimes of the Wehrmacht?
8
Were the British always among the most skeptical about free movement of people in the EU?