What is the current meaning of "Palestine"?

The term "Israel" seems to have a clear definition. It's a member state of the UN general assembly, and while its exact borders are controversial, I think in broad outlines people know the area it refers to. I'm less clear on what land qualifies as "Palestine", however. I'm aware that historically, all of the territory of that region was part of the British mandate of Palestine, but that would include modern-day Israel and Jordan as well.

So what is the meaning of the term Palestine as used today? Does it mean all the land in the former mandate of Palestine other than what's part of Israel and Jordan? Does it refer to the West Bank, the Gaza Strip, and the Golan Heights put together? Or does it just refer to the territory controlled by the "Palestiniean State", the new name for the Palestinean National Authority? A geographical dileneation of what the land outside of Israel is called would be good to clarify this.

It really depends on whom you ask. Depending on the context, people talking about "Palestine" could be referring to a few different things, though some definitions are more controversial than others. Barring historical definitions, like British Mandatory Palestine, Palestine could mean any of the following, in reverse order of controversy:

The least controversial definition of Palestine would refer to Areas A and B of the West Bank, as well as the Gaza Strip. 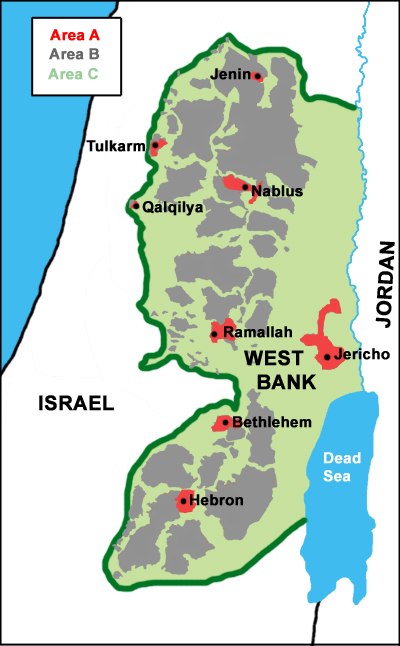 (Note that this image does not show the Gaza Strip.)

The Oslo Accords divided the West Bank and the Gaza Strip into three sections, areas A, B, and C. Area C is under full Israeli control, Area B is under Israeli military control but Palestinian civil control, and area A (comprising major Palestinian population centers) is under Palestinian military and civil control. An interim government, the Palestinian National Authority, was set up to manage Areas A and B until a final settlement could be reached. However, after Israel ceded all areas of the Gaza strip to the Palestinians in 2005, Hamas violently overthrew the Palestinian Authority government in Gaza and established control over Gaza.

However, Palestine is often used to refer to all of the West Bank and Gaza within the 1949 Armistice Lines.

This would include area C (though the term more traditionally used for these areas, albeit still controversially, is "Palestinian Territories"). Here you will find much more controversy, as many classify area C of the West Bank as part of Israel, or at least not as Palestinian.

The 1949 Armistice Lines (often called the 1967 borders, or the Green Line) were created after Israel's war for Independence in agreements with the surrounding Arab states. Egypt had captured the Gaza Strip, and Jordan had captured the West Bank. The armistice lines defined temporary borders (the agreements stressed that the borders were temporary and only existed out of military necessity), and acted as borders until 1967. In 1967, Egypt blockaded the Straits of Tiran, which Israel had said it would consider an act of war. In response, Israel destroyed the Egyptian air force. Egypt, Syria, and Jordan attacked Israel, but Israel repelled the attack and defeated the Arab forces in six days.

Israel's possession and sovereignty over territories beyond the Green Line are not internationally recognized, even in the case of Area C, which parties agreed in the Oslo Accords would be under Israeli control until a final settlement had been negotiated. Many countries and governments, including the Palestinian Authority, believe that all of the West Bank should belong to the Palestinians. As such, the West Bank and Gaza are often referred to as Palestine, or Palestinian Territories (or Occupied Palestine, or the Occupied Palestinian territories, etc).

Finally, Palestine is occasionally used to refer to all land West of the Jordan River. 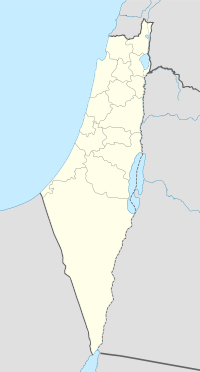 This would include Israel, the West Bank, and Gaza. Such usage is frowned upon, as it fails to recognize Israel's sovereignty within the parameters of the 1949 Armistice Lines. With the exception of most Muslim countries, North Korea, and Cuba, most countries recognize Israel's right to exist. This means that use of the term "Palestine" to refer to land including Israel is often used by extremists, like Nasrallah (leader of Hezbollah), who believe that Israel should not exist.

The term "Palestine" can mean a number of things, and Avi's answer describes them well.

However, there's another common usage, which refers to all of what is now Israel, the West Bank, and sometimes Jordan. After the Bar Kokhba revolt, the Romans renamed the area from Judea to Palestine, which was the name used (with minor variations), even by Zionists, until 1948, when the State of Israel was declared. Hence, the term Palestine may refer to the entire region, irrespective of the modern political boundaries.

Incidentally, this is also the usage followed by Wikipedia.

Well, it depends on who you ask. If you ask official PA (same people that Israel is supposed to sign the Peace deal with), their official non-English-speaking-word-speaking position - including in their textbooks, official media, communications with other Islamic countries, etc... is that "Palestine" means everything from Jordan to the sea... including what Western world calls "Israel".

Some examples (by no means exclusive) of the maps:

Source: Official Palestinian Authority TV, Oct. 26, 2013 PA Minister of Agriculture Walid Assaf presents a gift to a delegation of journalists from Oman. The gift is a map carved in wood including all of Israel and the PA areas. The Palestinian flag is on the map and the word “Palestine” is carved in wood as well as another shape bearing the PA’s logo. 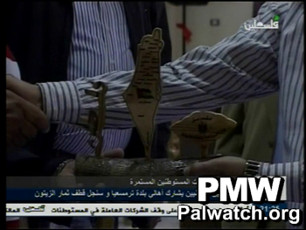 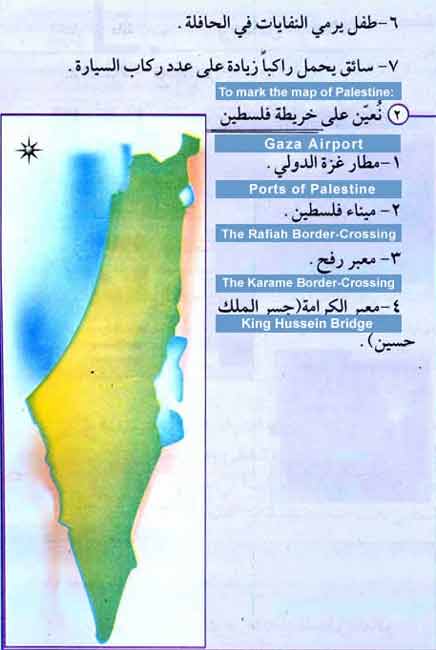 21
What is the current meaning of "Israel"?
15
How do American politicians refer to Palestine?

21
What is the current meaning of "Israel"?
15
How do American politicians refer to Palestine?
4
Does the government of Israel have an official position on the claimed territory?
4
Does moving the US embassy to Jerusalem make a three-state solution more likely?
13
Has a nation ever responded to a cyber attack (from a UN member state) by escalating to physical force?
21
What is the current Palestinian position on the right of return?
0
How has the Israeli right responded to Trump's failure to condemn Nazis?
5
How many Congressional Democrats support a one-state solution?