Why Does Pew Research Say That US 2016 Election Polls "Missed Their Mark"?

According to an article written by several people at Pew Research, "The results of Tuesday’s presidential election came as a surprise to nearly everyone who had been following the national and state election polling, which consistently projected Hillary Clinton as defeating Donald Trump." (Source: http://www.pewresearch.org/fact-tank/2016/11/09/why-2016-election-polls-missed-their-mark/)

I find this curious, since looking at data from US presidential election 2016, from RealClearPolitics (https://realclearpolitics.com/epolls/latest_polls/president/), seems to indicate high uncertainty. Especially given Nate Silver's IBD/TIPP Tracking poll (https://www.investors.com/politics/ibd-tipp-presidential-election-poll/)

It goes on to say "Across the board, polls underestimated Trump’s level of support." Given the following data, wouldn't it still be fair to say that the election has a reasonable chance of going either way? 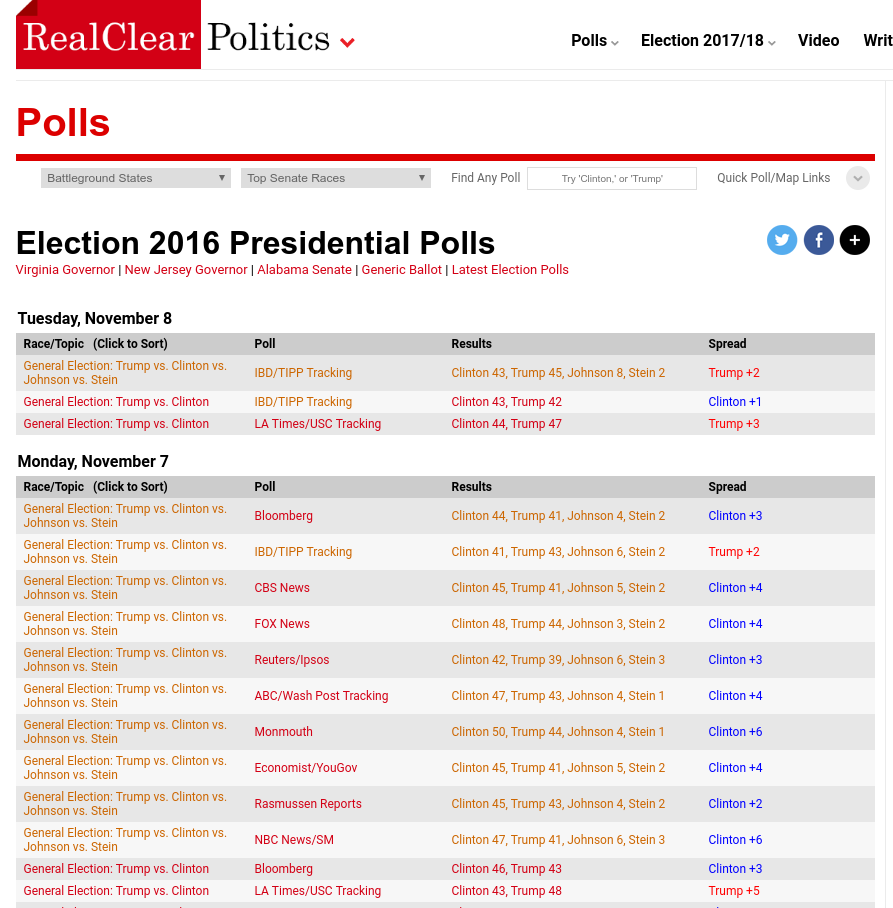 What explains this discrepancy? Why the asymmetry?

Given the following data, wouldn't it still be fair to say that the election has a reasonable chance of going either way?

Yes. Some polls showed Donald Trump with a lead. It was of course just as possible that their methodology was correct and the other polls were wrong.

The real problem was not the national polls. Most polls were pretty accurate when aggregated. The RealClearPolitics polling average had Hillary Clinton up by 3.3%. The final result was Clinton up by 2.1%. That's a polling miss of 1.2%, lower than the 3% miss from 2012. Yet no one is claiming a shy-Obama effect.

The real problem was that the polls were badly wrong in three states that mattered: Pennsylvania; Michigan; Wisconsin. The state polling went for Clinton in those three states, but Trump won all three.

Another problem was wishful thinking. Several prominent pundits had models that listed Clinton as an overwhelming favorite. They said the race wasn't close. But it came down to three states and Clinton lost them. Site fivethirtyeight.com picked the wrong winner, but their percentages were more reasonable. They said Trump had a 30% chance of winning. Meanwhile, other pundits gave Trump 1% or 2%.

Realistically, Trump didn't need that much to win. He needed to win Florida, North Carolina, and Ohio plus any one of Pennsylvania, Michigan, and Wisconsin. He ended up winning all six. The polls were in his favor in the first three, so he only needed a polling miss in one of the last three. A one in three chance of a polling miss is not so unexpected. This is particularly so since states have much higher variability than national polls.

The way that Trump actually won was less expected. A polling miss in Trump's favor in one of those three states was reasonably likely. That he got sufficient misses to win all three states was unlikely. Maybe a 1-2% chance. But that just underscores that pundits giving him a 1-2% chance overall were being overly confident. The race was closer than that.

People expect the polls to be accurate. For the most part, they were. But in three states, the polling averages were off. It just happened that they were off in three states that mattered. This feels like failure, although polls aren't really that accurate. Being off by 3% in one direction or the other is normal. The larger 5% or 7% miss in Wisconsin is rarer, but still within the possibilities. The real problem is that people expected polls to be more accurate than they have been historically.

To get back to this specific question, I find the Pew retrospective to miss the point. Polls weren't particularly wrong compared to history. The interpretation of them was. Of course, the Pew article was written last November, before all the results had returned. So they may have thought the polling miss was larger than it turned out to be.

Not the answer you're looking for? Browse other questions tagged united-states election statistics .

3
Why has Malcolm Turnbull called a double dissolution election (May 2016)?
129
Why were pre-election polls and forecast models inconsistent with the election of Donald Trump?
0
What do these regions, that voted for the Democratic party in the 2016 election, have in common?
3
Why did polls inaccurately predict the 2015 UK general election?
1
How does Estonia calculate the date of their parliamentary election?
17
Why are American states permitted to vote their own election laws?