While most of the world was celebrating the New Year, Iranian protests continued in the night 2017-2018:

"In the events of last night, unfortunately a total of about 10 people were killed in several cities," it said. At least 12 people have now died since protests began on Thursday.

The unrest continued despite a call for calm from President Hassan Rouhani.

According to BBC economic factor is an important key to understanding the cause of these protests:

There is widespread and seething discontent in Iran where repression is pervasive and economic hardship is getting worse - one BBC Persian investigation has found that on average Iranians have become 15% poorer in the past 10 years.

However, according to Wikipedia Iran enjoyed relief of some sanctions two years ago:

One might expect an economical recovery for Iran under these circumstances, but reality seems to contradict this.

Sanctions relief and sanctions being in action, didn't have any direct connection with our lives in Iran.

See the government is shadowed by another government (Islamic Revolutionary Guard Corps - IRGC). They don't answer to anybody and do as they wish. So, when the elected government tries to open up, actual people don't get so much! If there is an opening in transactions or import/export of goods, and making jobs, people hooked up to the IRGC get that job and position. (Some jobs need a very tight job interviews with questions that are almost all relative to how well connected to IRGC you are.)

People who don't want to be part of that end up having no use for these new opportunities after the sanctions.

Another problem is the shadow government is in direct disagreement to everything the elected government believes in. So, whatever they work on is somehow affected heavily by the IRGC and eventually fails, leaving people with a lot of lost money, and having to let their workers go unpaid for several months.

All jobs, like having a hotel, a restaurant, a cafe, a bakery and etc., relies on you getting a license from an organization directly controlled by the IRGC, and again, people on a loop of how close they are to IRGC. So when IRGC bans something you either should close the business and get into problem and even face jail time, or you follow them in banning that thing.

For example, you are banned from using waze, an Android navigation app. So multi million dollar e-hailing companies had to let go of that, and start using an IRGC backed navigation app, which fails to work stably and their drivers end up using more fuel and time and energy doing their work. And finally results in them starting a rally of their own.

So, getting more money and having more jobs is happening in Iran, but not for normal people. It's for people hooked up to the IRGC and Basij, having multiple jobs (even when they are so young that they haven't finished their university education!)

Let me give you an example, guess you have a lot of money and want to sign a contract with one of major car manufacturing companies from Germany or Japan. Technically you can do that, but since every body in the NICC (National Competition Council) are related to IRGC, they will say your manufactured BMW is not standard and safe enough to be on the roads of Iran and ISIRI (Iran National Standards Organization) bans you from selling them. So although you can make a deal with foreign countries, you are still limited to what IRGC allows you to do.

Look, just when the world is talking about the Iranian missile project, they ship some of high-tech missiles to a terrorist group in Yemen and even provide video and image proof of those missiles being Iranian.

We call it a shadow because it's not by the law, but it's by their power inside the councils deciding on everything. And by everything we mean needing a license to sell your songs, selling your manufactured cars, selling car batteries, or anything that gains you money!

I hope this helps a bit more on how a shadow government can cause things such as this.

tl;dr: Iranian living conditions have improved, but not as much as expected. This is because banks are still afraid of US punishments, and investment is hence not in line with previous expectations.

First, it's important to recognize that Iranian living conditions have improved since sanctions relief in early 2016.

Employment: Since in such an unstable environment, the labor force participation rate can vary quickly (and hence make it difficult to understand the unemployment rate), the employment rate is a better economic indicator. I did not find that, but since population shouldn't be too volatile in the short-run, the number of employed works good enough.

As you can see, the data is a bit volatile - most of which is seasonal variation. However, the number of employed Iranians has gone up by 1-1.5 million, compared to the 2014-2016 average.

Inflation: Similarly, inflation has been on a decreasing trend - consistent with improving living conditions. To be fair, I don't know the consumption basked used to measure this - it can be that in particular food prices have been increasing. However, the general trend appears positive.

I would argue that this shows indeed that the economy is recovering, and these numbers are in line with the weak GDP recovery outlined above.

This out of the way, is this recovery in line with expectations? Most experts would disagree.

While the US and Europe have lifted the sanctions, banks and intermediaries are still worried about US punishment.

This implies that Iran is still not connected to the international banking/transfer system. This makes it hard for any larger scale import/export to be done with Iran, since any company that would want to invest/trade with Iran needs a financial intermediary to cooperate with, and cannot find any. This has especially weakened FDI, although other reasons, in particular geo-political, played into the latter.

Investments however are the current limiting factor. Without these, the leadership has called for economics of resistance, rebranding self-sufficiency. Self-sufficiency however implies foregoing all the (comparative + scale) advantages of trade, and GDP far below potential output.

This is not to say that corruption and similar do not increase general inefficiency and can contribute to the lack of growth by disincentivizing investments.

However, they are not related to the sanctions relief directly: The improvements in employment are roughly in line with the weak GDP recovery.

Short answer: Because the sanctions were not the main cause of the most important current economic problems in the first place.

Both answers posted so far present good points, but I believe they miss the key factor here by accepting the faulty assumption of the question, namely, that the sanctions were the main cause of the economic hardships that have contributed to the current protests in Iran.

Strictly speaking, this is not correct. The oil sanctions that were imposed around 2009-2010 and lifted after the nuclear agreement, although affected the economy, were not the main cause of the current economic problems in Iran that is fueling the protests. This becomes clear by looking at the key economic indicators such as inflation, unemployment, and growth during the past few years and compare them with the past 4 decades. These stats show that inflation is now at its lowest after revolution and growth rate is going to be positive, around %5 (not considering oil exports), for the 4th year in a row. But unemployment is on the rise, which most believe is the main economic contributing factor to recent protests.

Here I explained why the unemployment has risen in the recent years (and still rising), and why it does not have much to do with the sanctions.1
Iran witnessed a huge population growth between 1980-1990s (from ~40m to ~60m, a ~%50 increase). It became concurrent with widespread availability and access to education (especially college education) throughout the country for both men, and women. This part of the population (lots of them being women) was to enter the job market after graduation from college, expected to be around 2006-2020. The enormous increase in the demand for jobs by this young, educated population could be (and was) predicted by some economists since late 1990s. The following is from an economics book (title: Industrial Development Strategies) published in 1999, in Persian:

In the coming years, the job market will face a huge number of young, educated people seeking jobs, lots of them being women. Our economy should either get prepared for widespread poverty caused by ubiquitous unemployment and low paying jobs, or become able to create over 1.1m to 1.2m jobs per year by performing fundamental changes in the economic policies and priorities.

This is what happened in reality (created based on the stats from Iran Statistics Center): 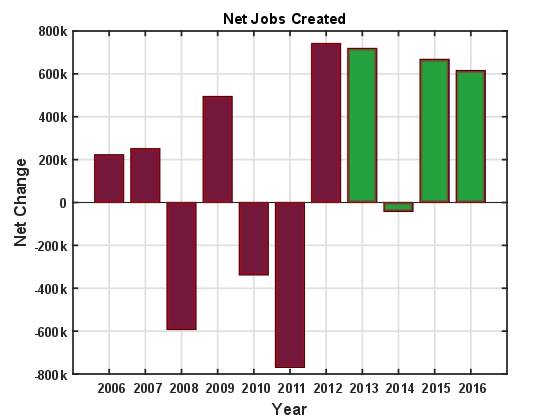 (Red shows Ahmadinejad presidency years, and green shows Rouhani's.)
You can see that even before the oil sanctions, the government's performance has been very poor with almost 200k jobs created per year. The end result was widespread unemployment.

(It is worth noting that oil prices substantially increased around 2008, creating a unique opportunity that could give the government the means to catch up with the population entering the job market, but unfortunately it is still not clear where all that money was spent on. This occurred during the presidency of Ahmadinejad, who is seen by almost all experts to have had extremely poor economic performance. Then came the sanctions, reducing the oil revenues close to zero and making everything worse.)

This is why unemployment is becoming prevalent especially among the youth, and is expected to rise in the few next years too. Therefore economic mismanagement by the governments especially during the past 15 years, was the main cause of the current economic situation. What is stated in @senaps answer is just a part of this mismanagement, and the point raised by @FooBar is correct that some sanctions although lifted on paper, are still in effect in practice.

The current protests are not fueled just by economic hardships. The protesters have political motivations too, such as limited personal freedoms, women's rights, corruption mostly caused by intransparency and unaccountability of the military forces, specifically IRGC who is unconstitutionally a big player in the economy, etc.

In conclusion, the sanctions (and the relief from them) does not have much to do with the current protests in Iran. They were not the main cause of the current economic problems in the first place. There are much deeper roots and more long-term reasons for that.

[1] This is based on a recent talk by Masoud Nili who is a professor of economics at Sharif University, has been a member of many key economic councils in the government in the past 3 decades and is currently the economic advisor of the President.

Not the answer you're looking for? Browse other questions tagged iran protests sanctions .