How are women integrated into the North Korean military? 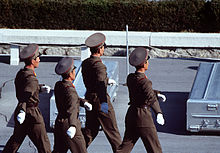 About 25% of North Korea's population is in either an active duty role or a reserve/paramilitary role in the Korean People's Army, and North Korea has mandatory universal conscription for men and selective conscription for women at age 17, in addition to paramilitary units incorporated into high schools and colleges. In practice, the percentage of women in the Korean People's Army's various entities overall exceeds 45%.

Only Israel comes even close to this level of military activation of its population, even though many countries have, or had until recently, some form of mandatory military service and subsequent mandatory paramilitary or reserve service, and I am not aware of any national or insurgent military force in the world with such a high percentage of women serving than North Korea (about 33% of soldiers in enlisted ranks and 50% of officers in the Israeli Defense Force, which would be the runner up to North Korea, are women).

How are women integrated into the North Korean military?

For example, answers to this question could involve descriptions of matters such as the following:

I am particularly curious because prior to the Korean War, Korea was a society with highly differentiated gender roles that were not strongly influenced by Western gender norms. (This doesn't necessarily imply that the differentiation was greater in Korea than in the West, but does mean that the differences are less familiar to me and many other readers here).

This strong gender role differentiation is something which does not seemed to have changed much in civilian life in North Korea based upon available glimpses of North Korean civilian life (e.g. by stealth photographers and personal accounts of rare visitors to this very closed society).

So, given that North Korea would not have been an obvious candidate to have the most gender balanced military in the world (at least on paper) a priori, it is interesting to know how this is handled there. It is relevant to the issue of the integration of women into the military in other countries as they consider policies related to involving women in the military.

Information is hard to come by, but the BBC article Rape and no periods in North Korea's army tells the story of a female defector's service.

There seems to be little attempt to integrate female soldiers:

Daily routines for men and women were roughly the same. Women tended to have slightly shorter physical training regimes - but they were also required to perform daily chores such as cleaning, and cooking that male soldiers were exempted from.

Moreover, it is unlikely that the distribution of men to women is equal among the ranks, or in terms of pay:

"North Korea is a traditional male-dominated society and traditional gender roles remain," says Juliette Morillot, author of North Korea in 100 questions, published in French. "Women are still seen ttukong unjeongsu, which literally translates as 'cooking pot lid drivers', and means that they should 'stay in the kitchen where they belong'."

With regards to fraternisation:

North Korea's military says that it takes sexual abuse seriously, with a jail sentence of up to seven years for men found guilty of rape.

"But most of the time nobody is willing to testify. So men often go unpunished," says Juliette Morillot.

Not the answer you're looking for? Browse other questions tagged military north-korea gender conscription .

2
Did the Obama administration perform any "show of force" moves on North Korea?
8
What mechanisms exist for Korean-Chinese to leave Korea and return to China?
40
Why hasn't the US tried to stop the North Korean missiles?
10
Which part of the Korean border is off-limits to North Korean soldiers?
0
Is it true that a man in the US is only given the right to vote if he accepts the draft?
12
Is South Korea a province of Korea?