What caused a massive shift in Republican ideological trajectories in the late '70s?

On a post on Skeptics.SE I saw recently, there was a chart showing the ideological position of the political parties over time: 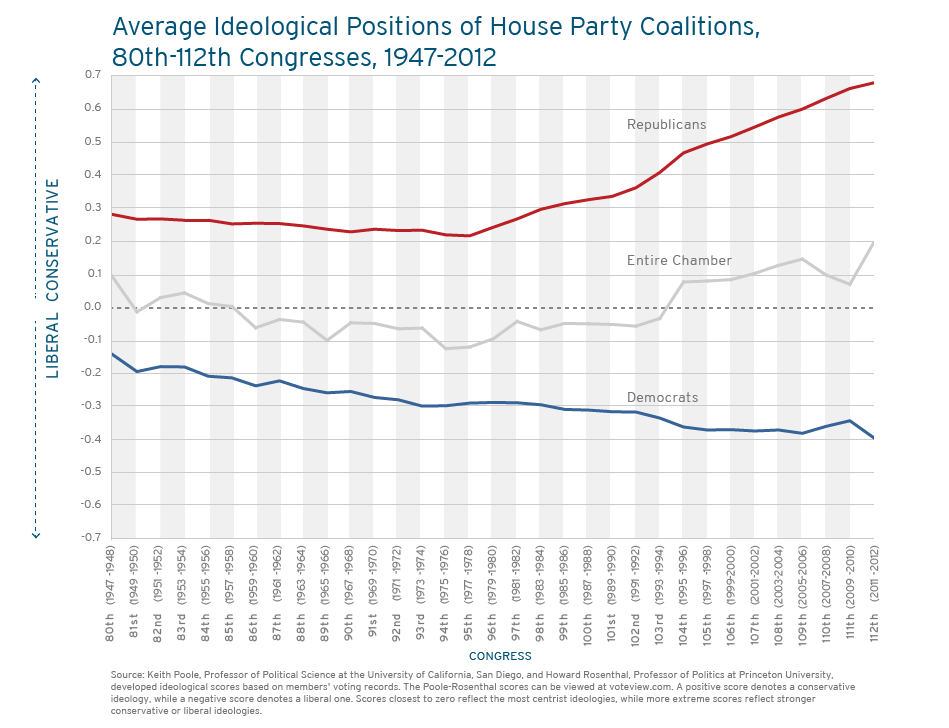 As you can see, both parties were drifting more liberal slowly but steadily for about 30 years, then suddenly, starting with the 1979-80 congress, Republicans started rocketing off towards the conservative end of the spectrum about eight times faster than the previous drift, and it hasn't slowed down since, causing the increasing polarization that has come to be such an issue today.

What happened to trigger such a powerful and long-lasting change in the ideological trajectory of republicans with little to no effect on Democrats?

Assuming the statistic is accurate

For a long time, neither the Republicans nor the Democrats were ideologically pure. There were the southern Democrats who voted very differently from the rest of their party. And there were New England Republicans who did the same (in reverse).

In 1965, Lyndon B. Johnson signed the Voting Rights Act. At the time, a higher percentage of Republican members of Congress voted for it than Democrats. But as Johnson signed it, the bill became inevitably associated with Democrats. So the southern voters, who were at the time overwhelmingly Democrat, voted for George Wallace in 1968 and for Richard Nixon in 1972. They were underwhelmed by Gerald Ford and voted for fellow southerner Jimmy Carter in 1976. But in 1980-1988 and every election since 2000, the south has voted for the Republican presidential candidate.

At first they continued to vote for Democrats locally. But in 1994, that changed. This seems to been a counter-reaction to the minority (plurality) victory of Bill Clinton in 1992. For the first time since the 1950s, the Republicans took control of Congress. Over the next twenty years that process continued to flip more and more House seats. Today the south is overwhelmingly Republican. Only a very small number of districts, mostly urban districts packed with African-American voters, vote Democrat in the south.

In 1992, Bill Clinton ran as a new, conservative Democrat. He dragged his party rightward with him. But in 1994, the Democrats became a smaller party. Most of the seats that it lost were held by its more conservative members. The two trends mostly balanced out, although you can still see a liberal drift in the Democrats during that period. It's just smaller than the Republicans' conservative drift.

Of course, this narrative assumes that the statistic is accurate and offers an explanation of how it might have come to be like that.

Is the statistic accurate?

Another question though is if the statistic is accurate. Let's try to trace the sourcing:

They ascribe the data to

This table uses ideological scores based on members' voting records developed by political scientists Keith Poole and Howard Rosenthal, available at voteview.com. The Poole-Rosenthal DW-NOMINATE scores can be viewed at voteview.com

If we then go to voteview.com we find their About page, which includes:

Voteview allows users to view every congressional roll call vote in American history on a map of the United States and on a liberal-conservative ideological map including information about the ideological positions of voting Senators and Representatives.

Ideological positions are calculated using the DW-NOMINATE (Dynamic Weighted NOMINAl Three-step Estimation). This procedure was developed by Poole and Rosenthal in the 1980s and is a "scaling procedure", representing legislators on a spatial map. In this sense, a spatial map is much like a road map--the closeness of two legislators on the map shows how similar their voting records are. Using this measure of distance, DW-NOMINATE is able to recover the "dimensions" that inform congressional voting behavior.

But it should be obvious that such a system measures ideology subjectively. It can't really compare legislatures over time, because different years have different bills. Someone has to manually identify a bill as either liberal or conservative. That's problematic enough in comparing two legislators voting on the same bill. Using it to compare legislatures in different time periods is entirely dependent on the subjective measures of the person (or persons) doing the rating.

Another problem is with the very concept of liberal and conservative. In Europe, a liberal is someone from a right wing party who believes in free markets, low taxes, and minimal regulations. In the US, that's a conservative. For decades, it was the position of the liberal ACLU (American Civil Liberties Union) that it was unconstitutional to prevent non-profit corporations from speaking out on candidates. Since the Citizens United decision, that has been the conservative position.

A specific example of relativism over time. In 1993, the idea of an individual mandate for buying health insurance was a conservative response to a liberal proposal for single payer health care. It was rejected by liberals. In 2010, an individual mandate was a liberal proposal. It was rejected by conservatives. On that particular issue, apparently the Democrats became more conservative. But the statistic doesn't show that. It claims that the Democrats were slightly more liberal in 2010 (-.329) than 1993 (-.314).

This isn't to say that the DW-NOMINATE data is useless. It's just to say that this particular application is an abuse of the data. It's much stronger when it looks at how Democrats and Republicans group when they vote. It used to be that both parties were far more likely to vote across the aisle than they are now. The parties are ideologically more homogeneous internally. That's true of both parties. And both parties are less in agreement with the other party.

It can be summed up by 3 things (and if I missed any, feel free to point out).

The 1976 Republican Convention was a borderline disaster. Think of Bernie's effect on Hillary's convention victory and multiply that by 100.

Gerald Ford came into the convention the clear favorite, with more delegates and more votes but without the number of delegates required to secure the nomination (Similar to Donald Trump, but in Trump's case, the other candidates bowed out and left Trump a clear path to victory). In 1976, Reagan had a loyal following and he thought he could challenge and win over some delegates and pull out a victory. He received a 10 minute standing ovation at the convention and his concession speech left many thinking "We voted for the wrong guy". What's more, the Reagan supporters LOVED Reagan. The Ford supporters, mostly liked Ford, and while Ford had more numbers behind him, the Reagan support was incredibly vocal and could be seen as a galvanizing of true conservatives.

If you go back to Richard Nixon, Nixon felt that the heart of the presidency was foreign policy. That sounds crazy today, it was a more common view in from post WW2 into the 1970s. Nixon didn't care as much for domestic policy and he didn't lean all that conservative on it. He founded the EPA for example.

The Republican party in the 1970s had conservative wings, the anti abortion wing for example and a few holdouts from the Dixiecrats, but it was nothing like the Republican party today where tax cuts and anti immigration are mandatory policies. Jimmy Carter was arguably the spending cut candidate in both 1976 and 1980, not Ford or Reagan, though Reagan did cut some spending in places, he increased it in others.

But I digress. I'm mostly trying to point out how the parties were different pre-Reagan to post-Reagan. Reagan's tax cuts, in 1980 were uncertain and many republicans had concerns and questions about them. George HW Bush called Reagan's economic plan "Voodoo Economics".

By 1988, Reagan's tax cut approach was seen as a great success and pretty much the entire Republican party aligned behind it. Now, tax cuts aren't all there is to a Republican congress moving farther right, but it was part of it. No good Republican supported tax hikes after 1988. George H.W. Bush got egg on his face for his Read my lips promise and then, 3 years later, raising taxes to pay for the gulf war.

While the conservative movement (as I said above) was galvanized in 1976 and strengthened behind Reagan's success, the influence of conservative talk radio shouldn't be dismissed. It was (and still is) very popular and it reached millions of listeners. Loudmouths like Rush Limbaugh were telling people that conservative is good, liberal is bad, and people listened. It's impossible to say how big an effect radio had, but it was a loud voice that had millions of listeners. It was free advertising and free support for any politician who was far-right enough. Moderate Republicans could even find themselves the target of far-right radio.

While it's often overlooked, the influence of Party Primaries is key to the republican party moving further right. "My opponent isn't conservative enough" and well funded conservative candidates are often able to win primary elections. There are exceptions where the moderate appeals to the masses and wins, but on average, America's political division means that the republican primary often leans right and the democratic primary (to a lesser extent), leans left.

A political candidate really only needs 25% of the vote behind the to win. If half the voters are left and half are right, and half the right voters like the other candidate, but the other 75% do not, 25% popularity can win a primary and then a 50/50 split along party lines can win the office.

Take Mitt Romney for example. (though he's not a great example because he lost), but when he ran for president he moved to the right so as to secure the victory in the republican primary. He was never that far right before, but he moved in that direction to win the primary. It's become necessary for many Republicans to show how far right they are to win primary elections and that's half the battle, and in Red states, it's 90% of the battle. Win the primary, the Republican is 90% guaranteed to win the office in deep red states.

This was less of an issue before the parties were so divided, but with the clear division in the party today, the primary system lends itself towards extremes, and this is especially true on the right where "My opponent's not a real conservative" can hurt the opponent and win an election. Republicans have to be very careful to not show any left at all today, and that's a lot of why the party has moved further and further right.

There are arguably other factors. PACs and Superpacs, which came more recently and money going to far right conservatives, and political strategists, like Karl Rove who's been called A Mastermind behind the Republican party. But the primary drivers are the success of Reagan, the galvanizing of people behind the Reagan model, and the wide divide between the two parties today and the nature of the primary election, which cuts the vote in half, and the "More true conservative" often has a clear path to office.

At the same time, the Moral Majority was started as an attempt to start winning over fundamentalist Christian voters to the republican party.

The introductions of these two sub-demographics naturally pushed the overall party's 'average' ideological stance closer to the conservative side of things.

Not the answer you're looking for? Browse other questions tagged united-states parties ideology history conservatism .

31
Why don't Democrats and Republicans collude?
3
Why have Democrats been consistently identifying as liberal in the US?