Are there currently sensible differences between european socialist and green parties?

In Belgium, they both have almost the same ideas. They want to stop nuclear power plants in 2025 and change to renewable energy , promote public transport, affordable health care for everyone,...

Is the difference where you live between socialists and the green party bigger or not?

Sometimes I tend to believe they're the same (but they are not). What is the greatest difference between both ideologies?

Edit: I don't really know how to make my question stackexchange proof, but i'll give it another try:

Socialism is about social justice, solidarity and equality and ecologism is about sustainable living. They're not really the same thing. One can be rich and the other not, they're not equal as to socialism, but maybe they have a sustainable way of living their lives.

On the other hand, the parties in Belgium who represent these ideologies have (almost) the same ideas. For me that's strange. They have another goal, but the same plans and ideas.

Do the socialists and greens in other countries (in the EU) have more diverse proposals or aren't there currently sensible differences between european socialist and green parties?

The next figure is from an article (https://yle.fi/uutiset/3-7919930) by the Finnish broadcasting company. It shows positioning of all the candidates of the elections (2015) to the Finnish Parliament (probably based on some questionnaire filled by the candidates). 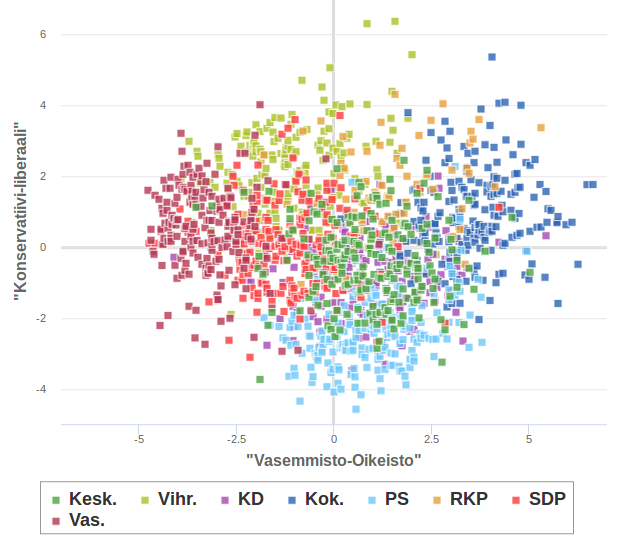 The y-axis is from conservative to liberal (konservatiivi-liberaali) and x-axis from political left to political right (vasemmisto-oikeisto). The parties are in different colors and I will try translate the party abbreviations in the bottom:

In Finland there is essentially one green and two leftist/socialist parties. The three parties we should concentrate here are the Green League (light green), the Social Democratic party (bright red) and the Left Alliance (dark red). We can see from the figure that the both leftist parties are clearly on the left side of the map, but so is the green party. The average green candidate would seem to lean as left as the average social democrat candidate, but not as left as the average Left Alliance candidate. Nevertheless the spread of green candidates in the political left-right spectrum is large and a formidable group of green candidates are politically quite right leaning. Also the greens differentiate from the two left parties by being clearly more liberal.

Yes, there are differences that depend both on country and on the European political group these parties belong to. For your example notice that the Belgium Socialist party is a member of Progressive Alliance of Socialists and Democrats (S&D) (currently the second largest in the European Parliament hemicycle). The party you support, Groen, is a member of Greens-European Free Alliance (EFA) (which typically has roughly 70% of agreement in the parliament with S&D, see table below).

There is another large European Green Politics group called the European United Left–Nordic Green Left (GUE-NGL). Together with the centrists Alliance of Liberals and Democrats for Europe (ALDE), these parties form the European left to center side of the spectrum.

Even between EFA and GUE-NGL there are subtle but important differences. For example GUE-NGL is seen (although more and more less so) as soft-eurosceptic (S&D is definitely Pro-European) . EFA is seen more as center-left party, as opposed to the GUE-NGL clear left. All of them, one way or another, support the typical issues (environmentalism, nonviolence, social justice and grassroots democracy) of green politics. And to a big extent so do all the parties up to the center (ALDE). 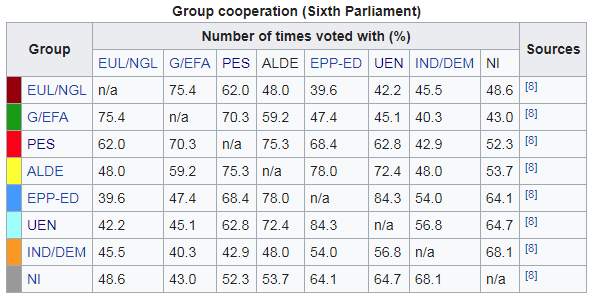 Historically Socialist (as in Social-Democracy) parties and Communist (as in State Socialism, albeit the democratic version of it) parties in the EU nations are old. The Green parties are recent, and typically a mixture of young people from different political backgrounds (the great majority from the left to center side of the spectrum) that advocate issues that are largely seen as less important in the more established parties (immigrant rights, gender equality, gay rights, drug legalization, and so on, and so forth).

If you want to further explore the macro differences between EU national parties check this interactive plot by Alexandre Afonso (data available also). One example with parties from Belgium, UK, and Germany (I choose the other two countries just so there's an international comparison) is this: 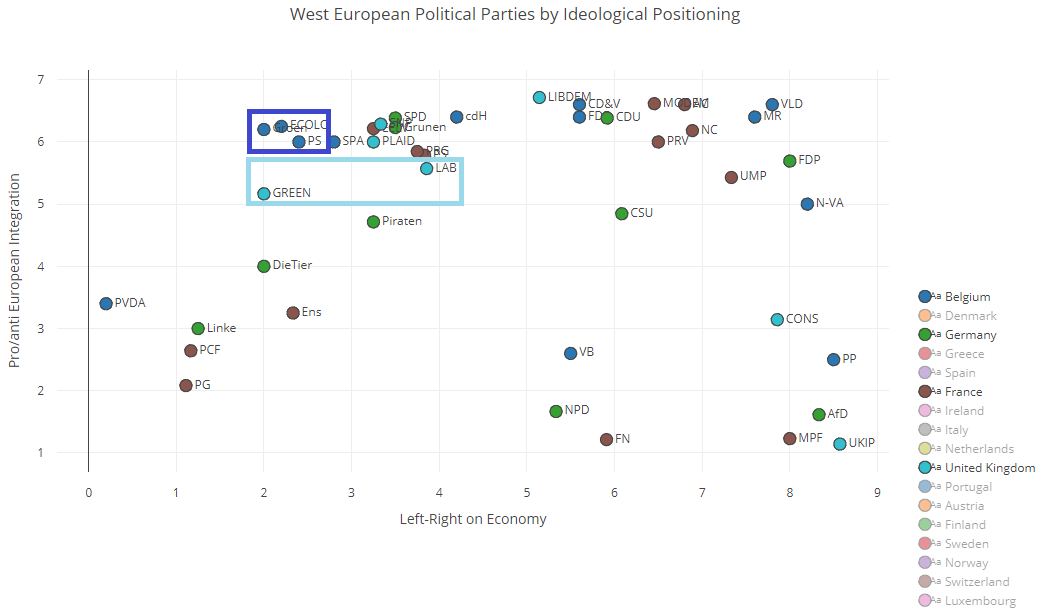 Notice that the Socialist Party and the Greens in Belgium are in fact very similar. But in the UK the difference is far more significative (I'm comparing it with the Labour party).

6
Are "left leaning" and "liberal" the same?

2
What are some programmatic differences between Podemos and Izquierda Unida?
11
What is the difference between libertarianism and anarchism?
4
Is fascism left or right wing?
16
Democratic Socialism vs Social Democracy
8
Why is Republican targeted messaging around socialism effective among immigrants from socialist or formerly socialist countries?
7
Are the differences between capitalism's and socialism's analysis of resource distribution fairness fundamental?
3
How do parliments in countries with Hemicycle shapes decide who is more left/right wing?
6
What are some criticisms of communism/socialism from a left wing perspective?