Why is SSI and SSDI so far below minimum wage?

Minimum wage is very high right now about $1000 a month. Why is Supplemental Security Income (SSI) only something like $500 and Social Security Disability Insurance (SSDI)not more closely related to the amount of money the person made before they became disabled? That seems to be forcing people into poverty who depend on the government and have no ability to leave poverty. Why are we not putting them in the lower middle class?

The basic reason is probably because Social Security benefits are inflation indexed, while the Minimum Wage has to be adjusted manually, which literally requires an Act of Congress.

In addition to the difficulties of getting benefits, they’re not especially generous. For those who do manage to get disability or supplemental security income, the average yearly benefit as of February 2013 is $13,900.

Okay, now we get to the nub of Big Swed’s question: how does the disability dole compare to a full-time minimum wage income?

As it happens, if you work full-time, it’s pretty close. The federal minimum wage is $7.25. Multiply $7.25 per hour by 40 hours per week and then by 52 weeks per year and you get $15,080. If the minimum were boosted to $9 an hour, however, as the President has proposed, that would bring maximum yearly minimum wage earnings, according to my calculator, to $18,720.

It should be pointed out, however, that only 20 percent of minimum wage earners work 40 or more hours a week, according to the Bureau of Labor Statistics; fully 58 percent work 30 hours or fewer. See this article in the Atlantic for more detail.

(taken from way down in the comments)

Now historically Social Security has automatic benefits adjustments built into it (called a Cost of Living adjustment, or COLA), tied to an economic index for inflation. That means benefits rise roughly inline with inflation unless Congress steps in to change something manually.

By contrast, the Federal Minimum wage has always been a static number, with no built-in mechanism for increase (well, not entirely true. Often when it is raised, it is done in a time graduated manner, but never an open-ended one). That means it stays at the same rate for years, until one fine day Congress decides to step in and bump it back up to what seems (to Congress) a reasonable amount to adjust for inflation in the intervening years. That makes it very "spiky" (when adjusted for inflation) compared to an indexed benefit. 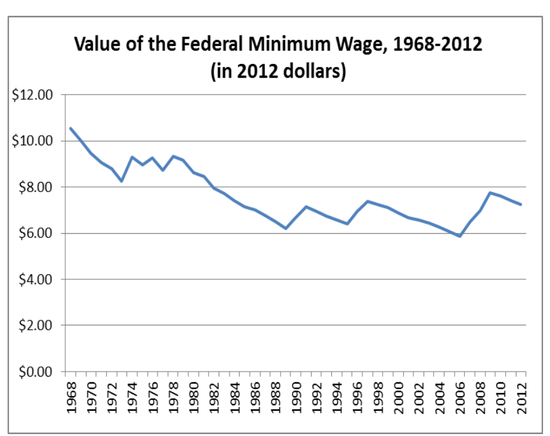 You could debate the wisdom of this setup from a Public Policy perspective (at least, over on the Politics stack you can), but this is how it has always worked. Currently, it has been at the same rate since July 24, 2009. Looking at it historically, that's definitely past the average amount of time before an adjustment, but far from the record of nearly 10 years in the '80's. It seems more or less in line with the modern (post-1980) trend of increases.

The idea is NOT to reward people for not working, but to give them the means to survive until they can find a job they can perform. And do remember that there are many other benefits for people on social security, like often subsidised rent, library memberships, free or subsidised phones, cable tv, food stamps, etc. etc., all of which raise their effective income over the poverty line.

Worse, if you were to hand them more money from a system that's already overstretched seriously, you damage the economy greatly. That money would have to come from a dwindling number of people who do pay taxes, reducing them to poverty for the sake of giving those who don't work more "free stuff", removing their incentive to get out of bed and go to the office/factory in the morning 5-6 times a week and work 8-10 hours for a wage that after taxes would quickly be less than what they see their unemployed neighbours on social security enjoying.

10
Are the viable political alternatives in the US (e.g. Democrats and Republicans) considered (far) left and (far) right?
12
Are Minimum Wage laws correlated with higher poverty levels?
6
Does the increase to the Government Contractor minimum wage have no real effective impact?
3
Feasible peak to minimum wage?
8
Why is stopping climate change prioritized significantly below the economy and other issues?
1
What would be the economic impact of implementing a flat profit sharing policy across all US businesses as opposed to raising minimum wage?
5
Who is in favor of mandatory minimum sentences and why?
36
Why is minimum wage not tied to the cost of living?
11
What is the motivation for a specifically $15 per hour minimum wage?
31
How far can gerrymandering go?