What is the significance of the people standing behind the speaker?

I've always wondered about why there sometimes a crowd is visible behind a public speaker such as a politician. It seems to be a predominantly American thing, especially noticeable during campaign rallies and such.

I am not talking about security staff, advisors or family members. The crowd often seems to be made up of ordinary people that are approving of what the person speaking is saying by showcasing supportive signs and apparel.

See this photo for example: 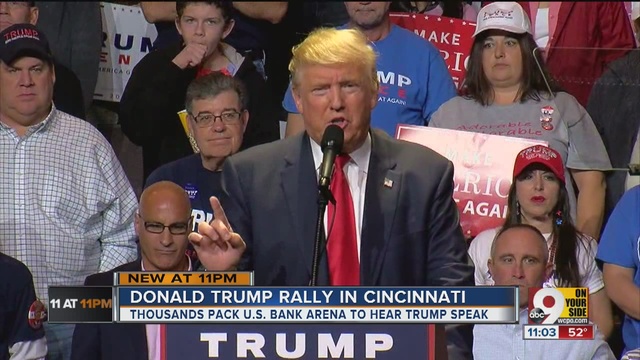 Possible reasons that come to mind:

So, what is the reason for the crowd in the background?

As a resident of a college town in Iowa, of presidential primary caucus fame, I have attended more than my fair share of political rallies. From my perspective as an audience member, there are a few things going on with the folks seated on the stage (obviously this answer is US-centric):

First, remember that the live audience is often the main target of a rally, even if a soundbite or photo op might make it into the wider media. Although a few events are televised in their entirety, most of them are not. And even most of the events that are televised rely on an enthusiastic live audience. So some of the staging is for the benefit of the people who are actually present at the event.

Having said that, there is definitely some staging going on for the benefit of whatever cameras might be present. This is pretty clear as rally organizers will generally do some "grooming" of the on-stage audience before the event starts.

Like you said, it's not a technique used only by politicians. It's something you see at many speaking events (at least in the United States).

Depending on the particular purpose of each event, the backdrop of people can mean different things. But here are a few purposes common to many of these events:

Bottom line, it's a method of persuasion. Whether it works or not is another question.

Not the answer you're looking for? Browse other questions tagged united-states president campaigning political-leaders .

22
What is the political significance of FEC fundraising deadlines?
19
What's the explanation behind Obama's joke about Bernie Sanders?
53
What does the POTUS do, exactly?
5
Who were the people behind Comey in the hearing room?
11
Can the speaker invoke the 25th amendment without the Senate?
8
What is the function and significance of this "House Office Bldg. 6" token? Is there some special significance?