Can the imprisoned Egypt presidential candidate Ahmed Konsowa be on the ballot? What is the law applying to him?

I found a tweet by POMED (Project on Middle East Democracy) that shares an image whose title is:

The full image contains a description on how real candidates have been banned from competing in the presidential election that is going to be hold on March 26-28: 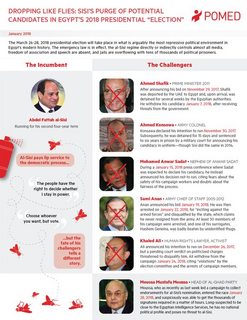 I was specially surprised by this one:

Ahmed Konsowa ARMY COLONEL. Konsawa declared his intention to run November 30, 2017. Subsequently, he was detained for 15 days and sentenced to six years in prison by a military court for announcing his candidacy in uniform—though Sisi did the same in 2014.

I found some news like Egyptian army officer jailed after announcing presidential candidacy: lawyer, family and Wife of Armed Forces officer and presidential hopeful Konsowa says he is being ‘treated well’ in detention and found some kind of confirmation on that:

He now faces charges of publishing a video in which he espoused his political views and violating military code and procedure.

According to Konsowa, he has attempted to resign from his military post countless times since March 2014 — a decision he said was spurred by President Abdel Fattah al-Sisi’s announcement of his candidacy in the 2014 presidential elections — but has been impeded by what he called bureaucratic red tape.

All in all, it looks like he was imprisoned for publishing political views on Facebook while being a member of the army. However, he states that this is the exact same thing that the current president Abdel Fattah el-Sisi did on 2014, since he was the General Commander of the Armed Forces when he ran for presidency.

So: did Konsowa really violate any law from the Army? Did el-Sisi also violate that?

Also: can he be on the ballot? What is the law applying here?

13
What criteria does a US Presidential candidate need to meet in order to appear on the ballot?
1
What is the punishment for theft in Egypt?
6
What was the political status of Egypt during World War II?
1
What will Egypt use its Rafale fighter aircraft for?
3
Why did the US approval rating in Egypt tank massively since 2006?
1
What happens when a presidential candidate dies before being inaugurated…?
8
Why are there state and local issues on a ballot on U.S. presidential election day?
18
What happens if a US Presidential Candidate drops out of the race after being nominated but before Election Day?
3
What is the exact process for counting my presidential election ballot?
8
Can a U.S. Presidental candidate skip or avoid registering for the ballot in any given state?