Was there a change about how US embassies should be constructed?

Reading an article about how official buildings should have be designed to be more friendly to the people (e.g. surrounding parks, allow visiting etc.), US Embassy in Romania was mentioned as an unfriendly example: very tall fences, quite a large area outside of it where you cannot walk or take pictures, lots of "do not cross" signs

The only picture I could find is this one.

Some random pictures for other US embassies across the World seem to indicate a more friendly design (e.g. Singapore, Berlin). A typical example of "friendly" official building is The Capitol.

I could not find an explanation for the US embassy architectural choice. Terrorism level is low and Romanians are pro-american people.

I know the embassy has moved quite recently (cannot remember the year), so I feel that the new building had to obey other constraints (e.g. security).

Question: Was there a shift about how US embassies should be constructed?

Yes there was. You can see it in this fact sheet.

In 1985 a document called Inman Report was released following a few attacks on USA overseas buildings. Some of its recommendations, known as the Inman Standards, ended up being the main guideline for USA embassy construction.

Using the Inman standards as a basis,...

...in 2002 the State Department adopted the Standard Embassy Design, or SED, a boilerplate model that could be built fast anywhere in the world. It had small, medium, and large options, like a t-shirt.

The result: dozens of new embassies and consulates completed quickly, but lacked individual character. The culmination of the SED was the massive, heavily fortified embassy in Baghdad, finished in 2009.

The depressing appearance and isolated locations of these embassies did not go unnoticed. Some diplomats said they hampered local relationship-building.

The most recent buildings, however, tend to be following the new guidelines called the "Excellence in Diplomatic Facilities" whose description includes (Note: OBO for Overseas Buildings Operations):

OBO will hire leading American architects and engineers. Their selection will be based on the quality of their design achievements and portfolio of work. The selection methodology will be open, competitive, and transparent.

In fact, although I'm not sure if the new London embassy was part of the program, it sure seems like a good example from it: 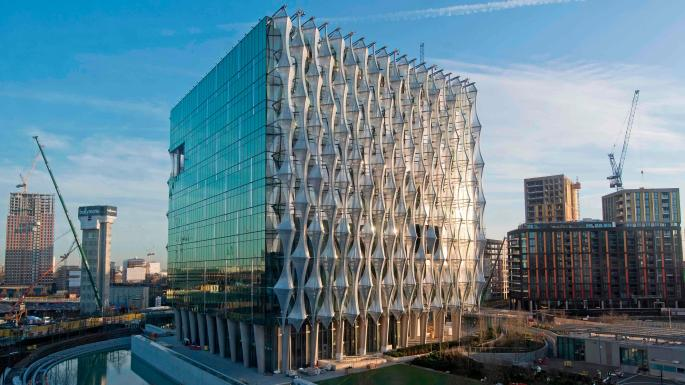 Not the answer you're looking for? Browse other questions tagged united-states romania embassy .

0
How to determine if an acquittal should not have happened?
8
Why was there so much talking about meeting with the Russian ambassador in the Oval Office?
13
How did political participation change after Watergate?
41
What was Eisenhower's warning about?
4
How to change states in US voting registration
8
Are there any restrictions on how amendment should be related to original law in US Senate?
4
Warren vs Biden in the polls: how sudden was the change?
21
Does the House Resolution about the Impeachment Inquiry change anything?
2
Is there any European organization that issue protest / demonstration warnings similar to what US embassies or OSAC are issuing?
5
Why was the 18th amendment constructed with way it was?