In 2013 did an SPD delegate conference vote on a proposed "grand coalition" in Germany, and if so what proportions of delegates voted for and against?

In 2018, the leadership of the Social Democratic Party (SPD) has proposed a coalition government with the Christian Democratic Party (CDU) and Christian Social Union (CSU), known as a "grand coalition" ("Groko"). First a vote was taken among about 700 delegates at a conference, which "try to achieve a Groko" won by 56% to 44%, and now a vote has started among the party's 470,000 members (on "go ahead and implement the provisional agreement with the other parties")

In 2013, the SPD leadership proposed a similar grand coalition with the CDU and CSU, and in a vote among the membership 76% voted in favour. In that year, prior to the members' vote was there also a vote at a delegate conference? If so, what proportions of delegates voted for and against Groko? 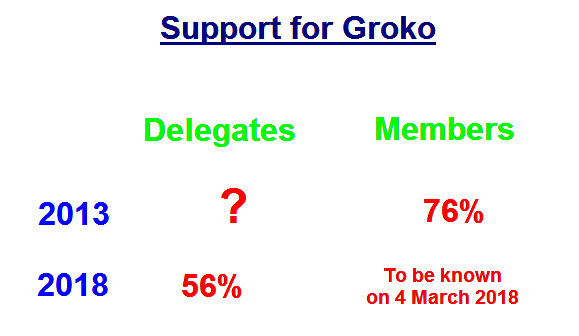 Yes, an SPD convention of "nearly 230 delegates" considered the Groko proposal on 20 October 2013. Around 85% voted in favour of attempting to agree a Groko. (Source.)

8
What caused the SPD to gain in opinion polls in early 2017?
25
Why do we need static coalitions?
4
CDU delegates will vote on German coalition proposal; SPD members have started voting; will there be a vote in the CSU too?
6
Can foreigners be members in German parties and fully participate in them?
37
What is the perception of European parties in the US?
25
Why isn't the CDU / FDP / AFD a viable coalition government in Germany (2021)?
9
Why does Germany's traffic light coalition seem more likely than ever before?
3
Do coalition partners in German parliament always sit next to each other?
36
What are the benefits for strong economies like Germany and France for being members of the European Union?