In the report Voter Turnout trend around the World (Solijonov, 2016) (for IDEA) the author argues in favor of your hypothesis: 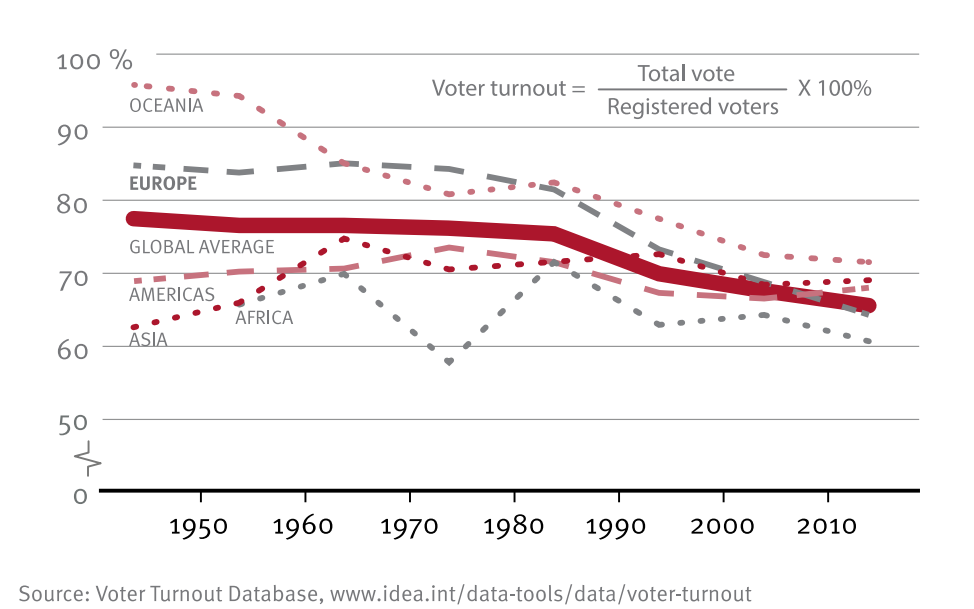 He does give some pointers as to the main factors that influence Voter Turnout (page 35):

This evidently is not an answer to your question. The main reason is that there might no be a global reason for lower Voter Turnout. He does makes an example to the particular case of Europe and the difference between the established democracies and the post-soviet states: 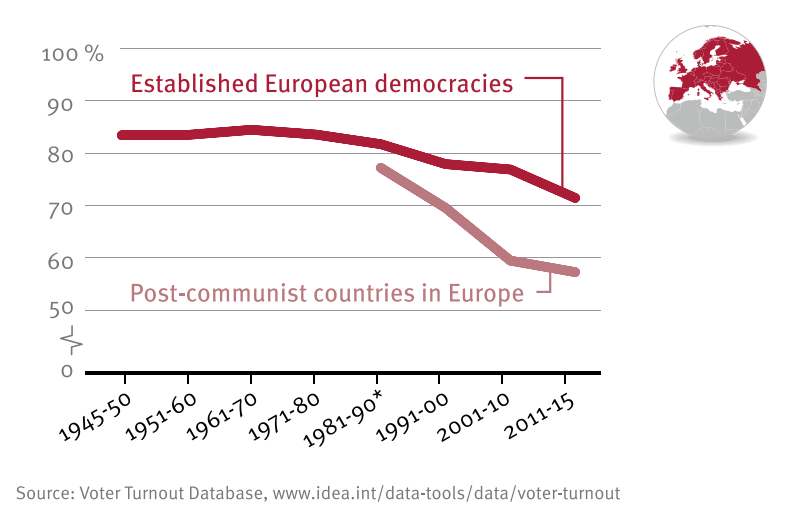 But although the difference is clear it's difficult to understand why both are falling. The closest he get's is by quoting Facing Up to the Democratic Recession (Diamond, 2015):

The ever-mounting cost of election campaigns, the surging role of nontransparent money in politics, and low rates of voter participation are additional signs of democratic ill health. Internationally, promoting democracy abroad scores close to the bottom of the public’s foreign-policy priorities.

Although I understand the point of view of the author I do feel his article lacks proper sources to fully support his view. Nevertheless he seems quite critic of US and Europe softening of policies regarding Foreign Policy:

And the international perception is that democracy promotion has already receded as an actual priority of U.S. foreign policy. The world takes note of all this. Authoritarian state media gleefully publicize these travails of American democracy in order to discredit democracy in general and immunize authoritarian rule against U.S. pressure. Even in weak states, autocrats perceive that the pressure is now off: They can pretty much do whatever they want to censor the media, crush the opposition, and perpetuate their rule, and Europe and the Unit- ed States will swallow it. Meek verbal protests may ensue, but the aid will still flow and the dictators will still be welcome at the White House and the Elysée Palace. It is hard to overstate how important the vitality and self-confidence of U.S. democracy has been to the global expansion of democracy during the third wave. While each democratizing country made its own transition, pressure and solidarity from the United State and Europe often generated a significant and even crucial enabling environment that helped to tip finely balanced situations toward democratic change, and then in some cases gradually toward democratic consolidation.

I can't fully subscribe his views without more information but I must admit that it his what comes closest to a global cause for lower voter turnouts.

NOTE: I was born and lived in a country deeply affected by the Eurodebt crisis. I can tell you the major feeling in its citizens was that things would remain bleak no matter what party formed government. Therefore the act of voting became redundant and voter turnout kept falling. This note is an aside and not part of the answer but the lack of perceived control seemed, to me, to be a strong factor in lower voter turnout.

Partial answer to a multi-faceted question...

Sometimes in the US voter turnout is intentionally suppressed by influential parties promoting unpopular candidates. The more unpopular a candidate is, the more suppression required to elect them, up to some eventual upper limit of their sponsors' influence.

Extrapolating this globally, one theory that would account for a declining voter turnout would be the world's promoters of unpopular candidates have become increasingly influential and are thus able bring about more voter suppression.

Not the answer you're looking for? Browse other questions tagged election voting .