Why did the Dutch government put XTC/MDMA as a hard drug?

Schedule I lists the substances classified as hard drugs, for example heroin, cocaine, amphetamine, ecstasy and GHB. However, almost no one dies due to XTC.

Why is it classified as a hard drug?

In 2011, the 'expert committee on list systems' came up with a report, 'Drugs in lists' (unfortunately I cannot find the full report). That report was offered to the minister for health and a news item by the government contained the following part on keeping XTC on List I (i.e. classifying it as a hard drug):

"As regards MDMA, better known as XTC, the committee concludes that investigations show that damage to the health of the individual in the long term is less serious than was initially assumed. But the extent of the illegal production and involvement of organised crime leads to damage to society, including damage to the image of the Netherlands abroad. This argues in favour of maintaining MDMA on List I."

It specifically names the illegal production causing damage to society and the country's status internationally as an argument for keeping it as a hard drug. I am not a lawyer, but I imagine this gives the police broader power in combating the production and distribution of the drugs.

I'm using UK data, as it is easier for me to obtain. I'm also assuming that "XTC" is your slang for "ecstacy" or MDMA, a proscribed drug from the amphetamine family.

In the UK in the years 2007-2016 there was an average of 38 deaths per year (see table 6b)in which MDMA/ecstacy was named on the death certificate as a cause of death. There may have been other deaths in which MDMA was taken but was not mentioned on the certificate for other reasons. The Netherlands has a demographically similar population to the UK, so it is reasonable to suppose that the danger from MDMA is similar in the Netherlands. Thus your assertion "Almost nobody dies from XTC" is false.

It is classified as a hard drug due to the potential for harm, as assessed by the Netherlands government, advised by a committee of experts.

Similar classifications exist in other European countries, for example in the UK, MDMA is a category A controlled substance.

I'd like to offer an alternative reason: The Netherlands signed the UN Convention on Psychotropic Substances, in which the UN committee added MDMA to the Schedule I category.

There are claims that the committee made that decision under pressure from the US, for example in the German Wikipedia: "Die Vereinten Nationen wurden von der Regierung der USA unter Druck gesetzt, die Droge wegen massenhafter Beschlagnahmungen unter Kontrolle zu stellen" ("The United Nations were pressured by the US-government to regulate the drug"), but I couldn't find sources to support them.

Why it was added I can't say, but why they keep it on that list... the number of incidents at events involving ecstasy might be a reason (ecstacy accounts for nearly half of those), or even overall usage (NL leads EU on that):

The Netherlands has the highest last year prevalence rate of ecstasy of all EU countries.

Although the EU review says that, it only gives some numbers to compare for lifetime prevalence, in which indeed the NL with 8.4% is well above EU average of 2.9%; the paper also gives the last-year prevalence, but only for NL (that was 3.4%). All these [three] figures are for 2015.

Anyway, they also say this about the high occurrence of ecstasy-related incidents at events:

In 2014, the Monitor Drugsincidenten (drug-related emergencies) (MDI) of the Trimbos Institute reported 3797 drugs incidents. In 47% of these cases ecstasy was used, in 19% of the cases cannabis was used and in 11% cocaine-HCL was used. The number of ecstasy related incidents has not increased since 2012, however the severity of ecstasy incidents reported by First Aid Posts at major events continues to increase in 2014.

However, there were few admissions to hospitals for ecstasy (actually psychostimulants in general, they don't break these down beyond that):

The National Medical Registration (LMR) registered almost 2 million admissions in 2012, of which in 538 cases drug abuse and drug addiction was the primary diagnosis. Of these admissions, 14% these were related to cannabis and 16% to cocaine. The National Medical Registration (LMR) registered 2938 cases in which drug abuse and drug addiction the secondary diagnosis, of which 26% was related to cocaine and 25% is related to cannabis. The most common primary diagnoses in these secondary diagnoses were: accidents; intoxication; heart-disease; abuse or dependence on alcohol; diseases of the respiratory tract; abuse or dependence on drugs; psychosis.

My quotes are from "A review and assessment of EU drug policy" (2016).

I looked at a Dutch MDI study, but it doesn't seem to get into details as to what those first-aid incidents involved specifically/typically in terms of health/symptoms. But it does have this combined graph of problems by drug, and this reinforces the impression that the main negative impact of ecstasy on users seem to be of the first-aid-required kind. 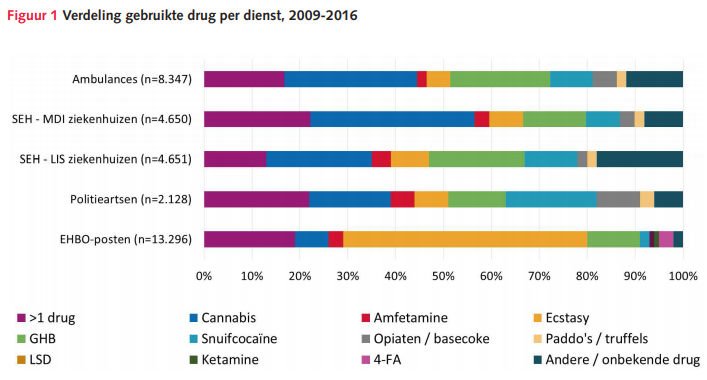 The "ziekenhuizen" bars are hospital admissions (primary/secondary reasons, I think); EHBO is first aid. The other bars should be self-evident (police arrests and ambulance need). They later have a breakdown of comorbidities for the ecstacy first-aid incidents. My google translated version of that says that in 45% of cases alcohol was also involved, and that 32% of cases also involved another illegal drug (i.e. a "cocktail"); this comorbidity data is only for 2016, which is probably why the "cocktail" figure is different from the 8-year cumulative data in the graph above.

Not the answer you're looking for? Browse other questions tagged drugs netherlands .

6
Would legalization of drugs increase the power of the FARC?
3
Are there any possible arguments in favor of sentencing disparities between crack and powder cocaine?
3
Why does the Dutch PVV oppose spending on innovation?
8
Does the DEA have authority to prohibit any substance?
8
Why is Medicare/Medicaid prohibited from bargaining for price in US?
3
Why did cannabis get legalized first?
22
Why does decriminalisation/legalisation not reduce the cost of drugs?