What can an independent election observer in Russia do if they notice irregularities?

A democratic election requires members of all important parties to observe the election during the preparation, voting and counting of the ballots. This makes sure that all ballots are counted truthfully and that the final result represents the actual votes. The same goes for independent observers from other countries and news organizations.

In the particular case of the Russian presidential elections in 2018, but also in principle, what can an election observer do if they notice serious problems with the election process? Do they have any legal power to force the election commission to re-do the elections, or is their job purely to increase transparency for the voters?

I was an observer yesterday at a Yekaterinburg voting station. I had been trained at a local Alexey Navalny headquarters (video example of training), but was officially an observer from Grigory Yavlinsky.

As an observer, I had the right to make suggestions to the Chairman of the Voting Station Committee. In case a suggestion is not considered, an observer has the right to file a complaint, which must be considered at a Committee meeting either immediately or as soon as possible on the day of voting. The meeting must result in a written decision. The complaint is prepared in two copies. One copy remains with the observer to serve as proof of complaint. The first copy, along with the written verdict produced by the Committee, is attached to the Voting Protocol - the final document that contains the results of voting. Of course a copy of the verdict is also given to the observer.

If the observer does not agree with the Committee's decision they may use their attested copy to file a complaint with the superior Committee - the Territorial Voting Committee. In my case, this Committee was just 3 kilometers away. A representative of this Committee visited us at midday to make sure everything went smoothly. We (observers) had phone numbers of members of this Committee in case we had any problems.

The observer may also launch a case in an administrative or criminal court. He or she may also make the complaint public.

The observer has the right to make video records and take photos. These may serve to substantiate his complaints and claims, and decrease the perceived legitimacy of the election even if the observer's steps made through official channels (superior Committees, courts) failed to right the wrongs.

I sent updates on voting turnout each half-hour to my Alexey Navalny headquarters using a Telegram chatbot, and consulted with their specialists using a couple of Telegram chats.

At the end of voting, each observer gets a copy of the Voting Protocol with the final figures (turnout, votes given for each candidate, number of ballots used, number of ballots spoiled, etc.). The actual Protocol is sent to the superior Committee which decides whether the procedure was performed just so. It may decide to recount the votes - in this case it must call all the Station Committee members and observers, gather them again in a single room, and make them recount the ballots, for instance, and produce a new Protocol. In some more fraudulent nooks and crannies of the Russian Federation, observers sometimes discover that a second Committee meeting was called in their absence because the observers were allegedly "out of reach" by phone. The observer then may make noise in the media, showing that the second (observer-less) session produced a Protocol with figures that are more pleasant for the powers that be.

From a legal standpoint, there are two main laws that the observer may use in arguments with Committee members, in courts etc: Federal Law 67 "On basic guarantees" (lays down the rules for elections and referendums) and the Federal Law "On Presidential Election in the Russian Federation". There are also other laws that may be used to defend your rights as an observer.

According to amendments made in the legislation in 2016, an observer may not be removed from the voting station by Committee members. He or she may be removed only by a court decision. This makes it harder for corrupt Committee members to make up pretexts for getting rid of irksome observers.

In real life, with Russia being an authoritarian state, there are ways to thwart an observer. However, Yekaterinburg is a big city (1.5m people) and is considered something of a democratic oasis (relatively speaking). We have an openly "non-Putinist" city mayor, for instance. So there was nothing outrageous at my station. I was mainly thwarted by my own legal illiteracy. I was barred from taking pictures of the Books of Voters (before the start of voting) because they contain personal information. I know that this particular case is moot: according to some laws, I could take pictures but not make them public. According to some administrative rules, I could not even take pictures of these books. The books did not look much tampered to me, although there were several signatures "made by mistake" and crossed out, so I did not force the issue. I read in a Telegram chat later that some other observer drove his Committee Chairman to a fit by insisting on taking pictures of the Books.

Do they have any legal power to force the government to re-do the elections or is their job purely to increase transparency for the voters?

An observer's actions may result in a manual recount of votes, and/or in some or all ballots cast at this particular station being deemed "null and void". I haven't heard of an entire election being re-run due to observer action. There must be some legal framework for this, I guess, but that would be an incredibly tough thing to achieve in Putin's Russia. Of course an observer has no direct power, all should be achieved through making as many records as possible and as many complaints as possible.

The two ballot boxes at my voting station: 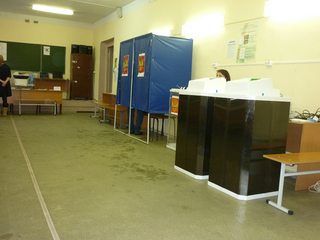 My copy of the Voting Protocol (click for a larger-size version): 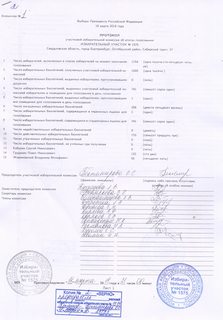 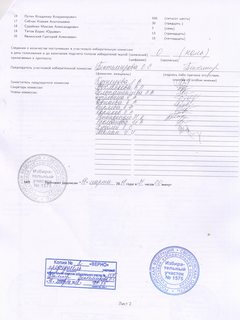 P.S. The legal part of my answer is based largely on Observer's Guideline (Справочник Наблюдателя) published by Golos ("Voice/Vote"), an independent observer organization. I read it for a couple of days before the voting; and on Observer Wiki. The sources are in Russian.

As their name suggests, they're observers. They don't do much beyond observing - and filing complaints about what they see (see Copperkettle's much better and lengthier answer). Their point of their presence is to give an assessment of an election results' legitimacy through transparency.

If they observe an election, and report that fraud was rampant, then the newly "elected" may end up with little to no legitimacy - and social unrest to deal with, like during Putin's 2012 election, and a bad reputation on the international scene.

They can do exactly what they are doing in this and other cases: Report on what they have observed.

The purpose of election observers is that any irregularities are at least known. There are always some irregularities in elections, even in the most advanced countries. The difference between them and some banana republic is the number and type of them. In Switzerland, a party might put a campaign stand too close to the voting office, or the ballot boxes might not be built entirely according to code. In Spain there were more serious incidents, and in some pseudo-democracies around the globe there might be ballot stuffing or people being turned away and prevented from voting.

The job of the observers is to observe and report on these, so that the public both in the country and outside can form an opinion about how the election was held and if the result can be considered fair or not.

So no, they do not have any power to force changes or re-elections. Their reports can cause such forces to appear, but not from the observers directly.

Not the answer you're looking for? Browse other questions tagged election russian-federation .

50
Why do oppressive regimes cheat in the election process rather than simply faking the results?
12
Why does Russia need to win Aleppo for the Assad regime before they can withdraw?
3
How are voting results from local precincts tabulated and passed to the news media?
4
What realistic repercussions could Russia face for election hacking?
5
Given Putin's widespread support, why cheat in elections?
47
What would Russia have to gain from interfering with the US presidential election?
6
In Russia, what happens if there is only one candidate in an election?
80
Why is vote counting made so laborious in the US?