Why did Vladimir Putin’s approval rating increase substantially after the annexation of Crimea?

Was it mainly because of the decision to annex Crimea? If so, why did that have major backing among Russian people? 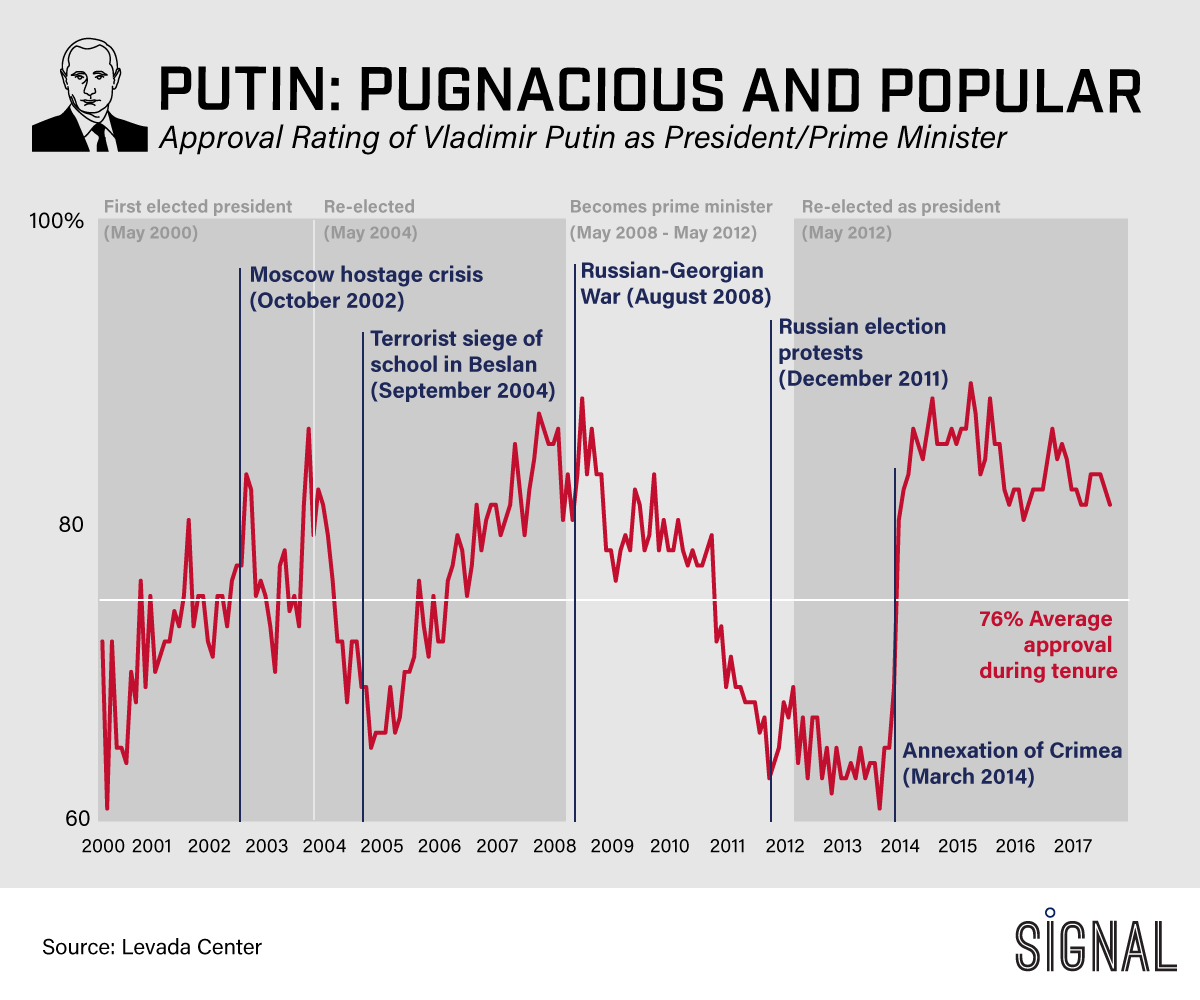 Here's a link to a snapshot of the Levada Center's English-language page from November 20th, 2017. The graph at the top of the page contains the data shown in the above infographic.

russian-federation public-opinion vladimir-putin
Share
Improve this question
edited May 6 '18 at 18:13

Russian society (as least both left-wing and right-wing supporters) has an extreme irritation to expansion of pro-Western/pro-NATO forces to the East, including recent overthrowal of pro-Russian governments in specified countries - which it historically considers as a field of national interests. By using military forces in such cases, Putin demonstrates a consolidation between the people and the government - hence what you see on this chart.

As for the Crimean case in particular - disappointment of Crimean transfer to Ukraine in 1954 that, accordingly to my grandparents, took place from the very beginning also looks to be one of the factors.

The link contains a few more graphs. Looking at the same period one can see that Putin's approval rating is closely tracking

It is inversely correlated to

It also has a few economic indicators which claim a fall (bucking the trend) in 2014. This seems to suggest an increase in popular approval despite initial economic slump resulting from the war. The economic indicators are shown to recover towards pre-war levels by 2016.

Without any source to either dispute or corroborate this data, it may be a piece of war-time and pre-election propaganda.

The current version of the site makes no claims about any falsifiable data. So it's difficult to asses its real methodology.

And, more importantly, there is no snapshot of this page of the site, on archive.org, before 2015. Which is quite remarkable considering that Levada site's graphs claim to contain data from as far back as 2000 and Levada site's copyright, in the snapshot, is listed as 2003-2017.

To be fair, there are other pages of the site which are present in the archives for earlier years. But the fact that there is no claim made about the values of this data before 2015 (the year that the war propaganda would start if it were to follow the war) is very, very suspicious.

It doesn't make much sense that a company would be going through the expense of collecting all these data since 2000 and wouldn't publish it until 2015. It also makes no sense to claim copyright starting with 2003 on data collected since 2000.

It's the nationalistic sentiment of Russian people.

Whenever Putin is inventing some new issues and posing those issues to the Russian nation, they are becoming united and are worshipping Putin as a "Great Leader." Sometimes, Russian national issues are not invented by Putin though. They come naturally, but the beneficiary is still Putin.

If you look closely, the graph reached, for instance, at its peak in June 2015. Do you remember what happened during that period of time? Well, that was when Russia intensified its war in Eastern Ukraine.

You will see another spike at the end of 2015. Do you remember what happened then? Well, that was the time when Turkey shot down a Russian military jet.

Any time there is a stunt, that is instantly propagated among the general populace and Putin gathers more support.

all are Putin's inventions to gather more support and rating.

If I remember correctly, Putin's 2012 election was a very tough win for him. Can you guess why? Well, that election was held in March 2012, and he could not invent anything new from the end of 2011 to March 2012. So, he hasn't made the same mistake this time around in 2018.

Now, the obvious question is, why does Putin need to invent those things times and again?

Well, you have to remember that Putin's rule is fraught with authoritarianism and extreme corruption. Russia isn't progressing like the West as what most of the people expected during 2008. Besides, Putin regularly blocked opposition leaders (real opposition) from taking the streets and gathering mass supports. So, there you have your answer.

Not the answer you're looking for? Browse other questions tagged russian-federation public-opinion vladimir-putin .

21
Why did ten countries side with Russia in the UN General Assembly vote on Crimea?
12
Why did Russia start its aggression against Ukraine after the Ukrainian unrest from 2013-2014?
19
Why would the Russian Annexation of Crimea be illegal?
16
Why did Vladimir Putin order a pullout from Syria in late 2017?
19
Why doesn't Russia recognize Kosovo if it uses the Kosovo precedent to justify annexing Crimea?
19
Why has Donald Trump's approval rating been rising since impeachment processes started?
8
Did Putin admit to giving the order to send the “little green men” into Crimea in an interview?
8
Did Biden underperform the polls because some voters changed their minds after being polled?
6
Why has Narendra Modi's approval rating remained high despite massive protests by Indian farmers?
0
Why doesn't Biden have a super-high approval rating like past presidents and some governors do?