Has any US state ever conducted a wide scale verification of registered voters to check the percentage of non-US citizens on the electoral rolls?

Given how easy it is to register to vote in the US as a non-US citizen, it seems plausible that a non-zero number of such persons are on the electoral rolls in the US. There are statistics which show a very low number of reported voter fraud cases, but at the same time such statistics are useless unless the voting officials are focused on catching immigrants voting illegally. This therefore raises the following question...

Did any US state ever conduct a wide scale attempt to verify what percentage of voters on its electoral rolls are actually US citizens? I know that there isn't a comprehensive database of every US citizen available anywhere, but at the same time it should be possible to verify if a given voter is an American citizen given enough effort.

See Nation Council of State Legislatures, almost all states take efforts to purge voter registration rolls of ineligible persons, including those persons who are ineligible because of citizenship. The reason for NOT expending effort tp "conduct a wide scale attempt" by targeting the subset of non-citizens is that it has been determined time and again that the number of non-citizens that attempt to vote is exceedingly low (but admittedly greater than zero). BTW, voting officials are always on the lookout for people attempting to vote illegally, not just non-citizens. 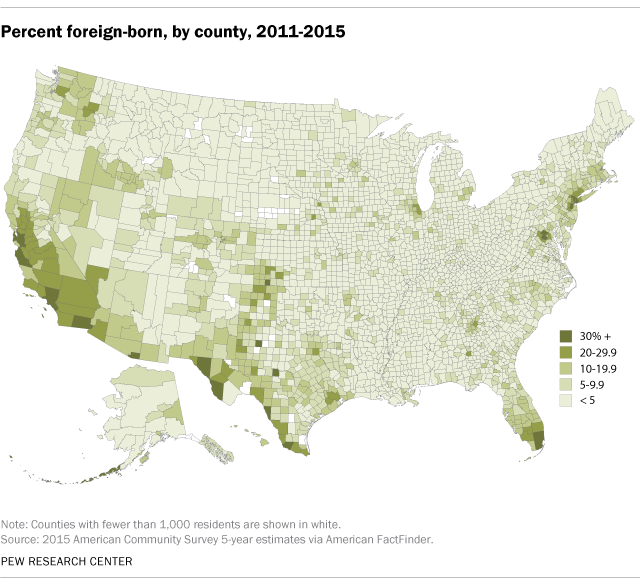 There is good information on the foreign born population of every county in the United States (and for that matter, every census tract), which is broken down by age as well.

As the map indicates, for the vast majority of counties in the United States, the foreign born population is very low. Only one in twenty of non-citizens in the U.S. live outside major metropolitan areas, while one in six native born citizens do.

And, one can use survey data and more isolated efforts to determine these figures to estimate a credible percentage of non-citizens who are registered to vote or do vote.

"As of 2015, the five counties with the largest foreign-born populations (Los Angeles County, Calif.; Miami-Dade County, Fla.; Cook County, Ill.; Harris County, Texas and Queens County, N.Y) account for 19% of the national immigrant population in the U.S." Source (citizen and non-citizen alike). Outside greater DC, greater NYC, Detroit, Florida, Texas, Nevada and the Pacific States, and a few other states in the Southwest, the maximum number of non-citizen voters even if an absurdly high (relative to reality) 5% adult non-citizens were voters, is negligible.

The number of counties where non-citizen voting could conceivably make a difference so as to justify a comprehensive study of the type suggested in the original post, is very small, and predominantly limited to Florida. So, part of the reason that such studies are rare is because the justification for them is so weak.

Not the answer you're looking for? Browse other questions tagged united-states election-fraud .

34
Is anything preventing non-US citizens from illegally registering to vote in non-Voter-ID states?
3
Does the US have a central database listing every US citizen?

4
Winning the US presidential election without majority vote due to TWO reasons?
5
Has a presidential candidate ever lost his home state and went on to win the presidential election?
1
Has any of the presidential candidates ever mentioned fixing our aging infrastructure?
20
Voter registration fraud: how is citizenship checked?
5
Has any organization ever made it off the SPLC list?
2
Have the USA ever suspended visa services in any NATO state before Turkey?
13
Has Trump ever criticized the human-rights record of any country after he became president?
8
How does the discrepancy between exit polls and results in recent US elections compare to pre-electronic machine margins?
2
Has the State Department IG released any info about Giuliani’s anti-Yovanovich campaign?