Why does Erdogan hate Bashar Al Assad so much?

“Assad is definitely a terrorist who has carried out state terrorism,” Erdogan told a televised news conference with his Tunisian counterpart Beji Caid Essebsi in Tunis.

“It is impossible to continue with Assad. How can we embrace the future with a Syrian president who has killed close to a million of his citizens?” he said, in some of his harshest comments for weeks.

What is Erdogan's problem with him?

international-relations syria turkey
Share
Improve this question
edited May 2 '18 at 6:35

Erdogan does not hate Assad so much, he hates that Assad is on the side of the Kurds. It must be said that Assad has also suppressed Kurds, but his forces are ignoring the current Syrian Democratic Forces.

The Kurds are a nation which is located in several countries, they also have a very, very long ambition for being independent and having their own nation. If you take a look at the map: 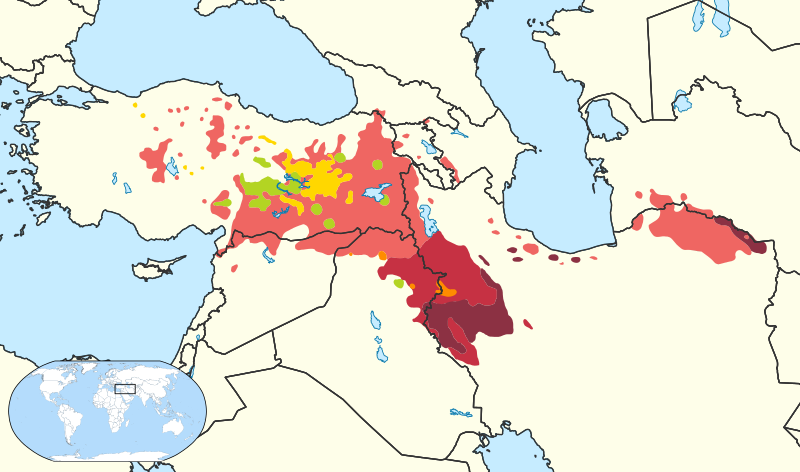 As you see, they have a part in northern Syria and a quite big part in Turkey.
Turkey, which wants to maintain its current territory, has a very long and difficult relationship with the Kurds which resulted in severe suppression. As a result, the PKK was fighting against Turkey. The PKK had initially some success to make the world responsive for the situation, but ruined that when there were violent protests of the Kurds (also in Germany). The government of other western countries were less inclined to support the PKK because it was a socialist party. Finally Turkey got Öcalan, the leader of the PKK. So a long time it looked like that Kurds won't get any progress.

Time jump forward.
The USA attacked Iraq and finally conquered it, but war is expensive and Rumsfeld believed that less troops are necessary because everything will fall in place once Iraq was liberated.
But ISIS/ISIL began to rise and insurgency was climbing, the USA had more and more problems to maintain stability. In their plight they looked if there is a possibility to get it off their shoulders. Now the Kurds were already in Northern Iraq, they had no sympathy for ISIL, so the USA supported them more and more. This culminated in the building of a quasi country, Iraqi Kurdistan.

At September 25th, 2017 the overwhelming majority of Kurds voted for independence of Iraqi Kurdistan

Since then Erdogan has nightmares about the situation because the majority of Kurds are in Turkey and they may smell independence from Turkey. Iraqi Kurdistan has also oil available, so a full Kurdish state may not be as easily squashed than a bunch of insurgents. In fact, Erdogan has many times been suspected to support ISIS/ISIL secretly.

Therefore Erdogan is livid and wants to destroy everyone who he sees as supporter of the Kurds. Assad ignores the Kurds currently because he has many fires to extinguish, so like the USA he transfers control to have more troops available in other positions.

The same reason, in fact. Turkey was among the primary sponsors of the Syrian war from the very beginning. The USA, UK, France, Saudi Arabia, Qatar and Turkey - this is the short list of the states which started all this mess in 2011. Moreover, it was nearly impossible to do without Turkish assistance - just look at the map.

So Erdogan didn't start the war, because he hates Assad, but, vice versa, he hates Assad, because he started the war against him. Of course, now the situation has changed in political and military sense, but Erdogan has no reason to make friends with Assad anew (yes, they were on quite good terms before all that happened). The point is that Assad is under the tight control of Iran and Russia and has a little value of his own.

So when Erdogan speaks for "western" or national press, he says that Assad is "a public enemy" and such, but when he speaks with Russians, he has absolutely no problems with cooperating with Damascus. In fact, his doublethink is quite amusing.

I am curious as to their motivations and why they are involved, which I don't think you have (clearly) explained

That's an interesting matter, though it's only partially related to the original question.

Let's put it like this: the so-called "Arab Spring" is the great occasion and opportunity for many countries to get some big and yummy piece of the geopolitical pie. Yet it's natural to suppose that the primary initiators of the Syrian war were the same countries as with Iraq, Afghanistan, Yemen, and, possibly, forthcoming Iranian war. That is the united states of "America and Gulf" (and, yes, I mean all these wars should be viewed in common as a sort of "the New Great Game" in the Middle East).

But they certainly needed some allies: France, GB, Jordan, and, of course, Turkey - a large neighbour country and the member of NATO (there's also an interesting question about the role of Israel, but it became apparent only later, so I can't claim they had much to do with this in the first period of war; of course, there are other countries involved in it, but for such as Bulgaria, Czech Republic, Croatia, Germany, etc. this is mostly arms manufacturing/sales/smuggling business).

No one knows what exactly was promised to Erdogan, but during 2011-13 the anti-Syrian alliance sailed in the same boat. However, the most interesting events took place in 2014 when the Qatar-sponsored ISIS made a spectacular rise out of nowhere. They quickly occupied large territories in Iraq and Syria, and started to push on Saudi-sponsored Al-Qaeda/An-Nusra, USA-sponsored YPG, etc.

Turkey, being closely tied with Qatar, was accused in helping to ISIS many times by different parties (including Russia and USA). It's especially obvious that Turkey was among ISIS' most valuable trade partners in this time.

Then in 2015 the USA-controlled Kurdish guerillas broke the truce with Turkish government and carried out numerous terroristic acts during 2015 and 2016 resulting in the new round of the long-standing Kurdish-Turkish conflict.

The next attempt to solve "Turkish problem" was on 15-16 July 2016. Immediately after that Erdogan finally switched sides and started closely cooperate with the Russian-Iranian-Syrian alliance.

So what's next? ISIS seriously got under fire in 2016, and especially in 2017, when Qatar was blockaded by its neighbouring countries, because of "the alleged support of terrorism". And the most loyal ally who helped to Qatar to withstand these events was, of course, Turkey.

Of course, there's much more awaiting for us: the war in Syria still continues, and also the war in Libya, where Turkey and Qatar allied with Italy to support GNA against LNA/Khaftar, who is, in turn, supported by France, Saudi Arabia and Egypt. And maybe there'll be some war in Iran, who knows?

Most certainly the politicians have many plans and ambitions. But we don't know exactly their motivations and aims. All we can do is to analyze "the visible events" and to follow them chronologically.

5
Why does Erdogan want to strengthen presidential system?
18
Legality of Syrian invasion by US and allies
12
Why does Russia need to win Aleppo for the Assad regime before they can withdraw?
11
Why don't Western powers support Bashar al-Assad since it now became clear most of the opposition is not in support of democratic government?
3
Erdogan and the people he fired
7
How did Erdogan take control of Turkish Military?
1
Has Pence essentially granted Kurdish Syrian territory to Turkey, subject to Russian approval?