Are there regions within Russia with a majority population that is not ethnic Russian?

Russia has annexed Crimea, and is making noises about regions of other countries, based on the premise that those regions have a majority population that is ethnic Russian. This makes me wonder, are there regions within Russia that have a majority population that is not ethnic Russian? If this racial/nationalist argument was taken to its extreme, how much territory would Russia stand to lose?

This makes me wonder, are there regions within Russia that have a majority population that is not ethnic Russian?

Answer is yes, according to 2010 Russian Census, there are several smaller or bigger regions where Russian ethnicity is minority.

If this racial/nationalist argument was taken to its extreme, how much territory would Russia stand to lose?

Pretty big territories. Sakha Republic is one massive land of 3103200 sqKm with 958528 of population. But the rest of territories would sum up bigger than Belarus with more inhabitants than Sakha Republic.

Wikipedia is pretty detailed in this topic

And I recommend this map to check out: 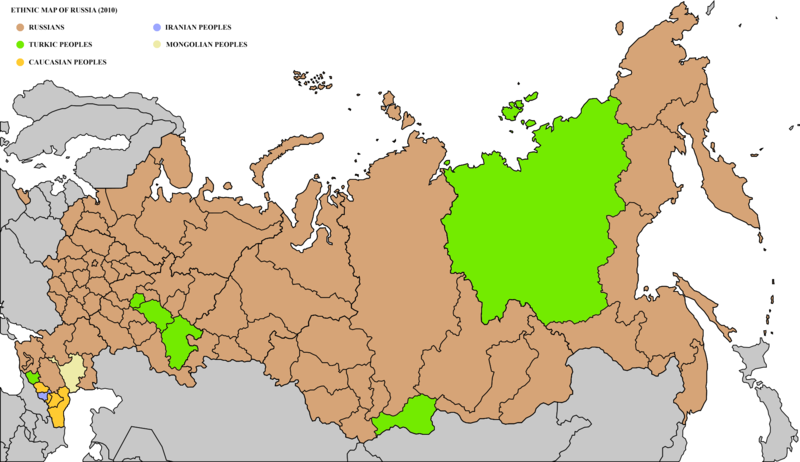 This is a reasonable question, given the geographic and demographic spread of the largest country in the world. But Russian policy tends to focus on citizenship rather than language and ethnicity. The Russian government gave out passports to large numbers of Ossetians and Akhazians, as well as stationing troops in Transnistria. Significant numbers of people given Russian passports are not generally considered ethnically Russian, but they do politically align with Russia and it provides a useful pretext for invasion.

While the Nazi government in the mid-20th century focused primarily on ethnicity and some sort of natural homeland for a German nation, thus justifying incursions into Danzig, Bohemia, etc., the Russians are focusing more legalistically (or imperialistically?) on citizenship. This is also more grounded in international law (though still basically just a rhetorical fig leaf) and more flexible with regard to ethnicity. Russian expansionism leans more towards nationalism (a nation is a group of people who wished to be governed in concert) rather than ethnicity (people of a common cultural identity). So it may be less divisive for internal non-Russian groups. It also does not clash with the passport-centric view of borders and interests, since their internal minorities are citizens.

Suppose in 70 years the EU falls apart, and suppose that at the moment of separation each person is automatically assigned the citizenship of the country where he or she resides at the moment.

In my opinion, this is the key to understanding the post-Soviet discourse. For many years in the Soviet Union existed propaganda that encouraged being one nation, marriages between people of different Soviet republics were encouraged and happened often, also some people were forced to go to work to regions other than their home state, while their extended family remained in their home region. The usage of the Russian language across the Soviet Union was encouraged and it was prestigious to speak Russian (compare with English nowadays). Then suddenly these people became citizens of different countries. Moreover, the countries began to encourage their cultures and languages. Some of these migrants were not prepared to study new languages from scratch and to lose their jobs because of their inability to speak a different language.

To conclude, these "ethnic Russians" are not always Russians but rather people that were originally from the Russian territory, or maybe from the territory that was Russian before the Soviet Union, and whose native language is Russian. As far as I understand it, they form political groups and fight for their right to somehow move "back to their home country", which is not realistic, but this is their motivation, not the fact that they are "ethnically Russian" or "culturally Russian". Mostly they are "linguistically Russian" or have relatives or connections in Russia or have better career perspectives in Russia.

Not the answer you're looking for? Browse other questions tagged crimea nationalism russian-federation .

11
What level of autonomy do regions within the Russian Federation have?
8
Was there any war Russia has ignited that was NOT explained by its “support” of a newly-created “People's Republic”?
5
What is the basis for Putin describing the collapse of the Soviet Union as “the greatest geopolitical catastrophe” of the 20th century?
13
Why don't Russia and Ukraine enter an official state of war?
8
What international or domestic legal consequences could Russia face, if it is proven that Skripal was poisoned by Russian operatives?
7
Are there democratic countries that joined to form another independent country?
18
How do Russians [especially Russian Muslims] understand Putin's disapproval of 'multiculturalism'?
3
In the 2020 constitutional referendum, what factors explain the low approval in Nenets Autonomous Okrug?
6
Ukraine and the North Atlantic Treaty Organization (NATO)