Which parts of the world are not claimed/part of any country (not Antarctica). Do they have inhabitants? If they are inhabited, what citizenship do the inhabitants hold?

There is indeed a small patch of land between Egypt and Sudan not claimed by any country: Bir Tawil. It is essentially a patch of desert in the middle of nowhere with no inhabitants, no infrastructure and no known natural resources.

But before you move there and found your own micronation: Keep in mind that when Sudan and Egypt ever come to an agreement regarding the Hala'ib Triangle, then that agreement will likely also clarify which one of them gets Bir Tawil.

On the border between Croatia and Serbia, near the border with Hungary, there's a small (7 km2), uninhabited area called Siga which is claimed by neither Croatia nor Serbia, though it's under control of Croatia.

Like the case mentioned by Philipp, this is again a border dispute where the 'real deal' is about more (valuable) land and this small piece of land is just a result of each country 'consequently' applying its own desired border rules.

This piece of land has been used to found the (unrecognized) micronation Liberland in April 2015.

It's the area marked green in the picture below (source: Tomobe03 on Wikipedia): 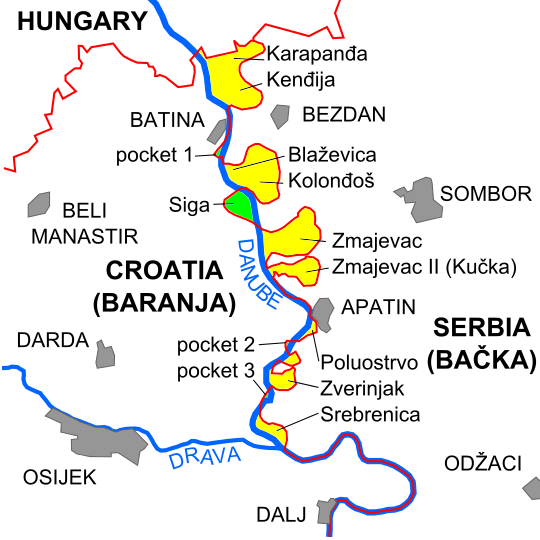 Both Glorfindel and Philipp give examples of unclaimed lands (Siga and Bir Tawil). These types of land are called "terra nullius" and are often sparsely populated and lack mineral resources. Today there are only three terrae nullius: Siga, Bir Tawil and Antarctica. Currently the only official terra nullius is Antarctica because the other two are claimed by the bordering nations to belong to the other bordering nations.
There are other areas that are not ruled by any nation and I assume that you don't mean these in your question: outer space, international waters, international airspaces, and international seabeds. As @Calion noted, there are attempts to make new "terra nullius" in order to not be a member of any nation or to form new micronations (which are generally not accepted as being true nations). These attempts are known as "seasteading"

There are, indeed (apart from those mentioned in other answers) parts of world not claimed by any country - by the Outer Space Treaty. Article II says:

Outer space, including the moon and other celestial bodies, is not subject to national appropriation by claim of sovereignty, by means of use or occupation, or by any other means.

So celestial bodies are truly unclaimed by any country. There are no known inhabitants, apart from those astronauts at the ISS, but in any case, it is a vessel and not a celestial body, the astronauts are on temporary missions and cannot be considered inhabitants in the intended sense, and they keep citizenship of their respective countries.

1
What impact on urban sprawl is there when each major city has its own administrative division?
3
Can a country sell part of its land to pay off huge national debt?
52
What are the primary objections Democrats have to a border wall?
8
Open Irish border and WTO's most favoured nation principle
4
Are there any other "Nine-dash lines" out there?
5
How do all the different European Union countries maintain their different laws while being a part of the Schengen zone?
5
What is the opinion of Irish nationalists on COVID-related border checks?
21
Can a country block its airspace to international civil flights without any reason?