Is Fox News correct that Mueller shouldn't be going after a campaign finance violation?

I'm anti-Trump, just to get that out of the way, but I'm also curious about the legal aspects. I hope this falls enough under political and not legal but if you think it's better for the legal board, feel free to move.

Mueller recently got a warrant and "raided" - I don't like the word raided when a warrant is obtained, but that's the word most articles are using, so he raided Trump's former lawyer Michael Cohen - all legal, all well and good.

Fox News and Team Trump is saying that Mueller has no business going after campaign finance violation in a Russia-collusion investigation. My question is, is that correct, or does the FBI have an obligation to seek out any crime?

I know that if it's the police, and they think I might be guilty of murder, they get a warrant, they search my apt, they don't find a murder weapon but they do find my bag of illegal drugs, that there's a good chance I'll be charged for possession of illegal drugs. Perhaps the same thing applies to Mueller that he "can" use whatever he finds.

Is there a law that defines whether Mueller should go after anything, or is he legally or perhaps ethically bound to only pursue Russian collusion? (He could have searched Michael Cohen's office for Russian collusion, and that may even be what was presented to the judge when they got the warrant) I'm not sure.

I'm just curious if, when it's the FBI investigating a politician, is anything they find fair game (like cops searching my house after obtaining a warrant), or are there legal or ethical reasons why Mueller should stick 100% to possible Russian collusion, and, as team-Trump suggested, pass the campaign finance stuff to another agency/person? (I'm guessing that the FBI would investigate campaign finance violations, so it would be passed on within the FBI).

The "raid", which is the execution of a search warrant, is under the jurisdiction of the US Attorney's Office of the Southern District of New York, not that of the Mueller investigation. Mueller presumably referred whatever prompted the warrant to Rosenstein (deputy US Attorney General and his direct supervisor) specifically because it doesn't necessarily fall under the scope of his investigation.

Note that we don't know the exact nature of the evidence presented to get the warrant beyond it being something related to "campaign finance violations, bank fraud, and wire fraud". While Cohen has presented it as being about the 130k Stormey Daniels payment after the fact, there is no indication from any other source involved that its strictly limited to that.

To get the warrant, the approval of Rosenstein (deputy AG), the head of the DOJ criminal division, the US Attorney for SDNY (though he recused himself from this for some reason, so whoever substituted for him), and a federal magistrate judge or district judge are required.

The standards for executing a search on an attorney is much higher than for other people precisely because of attorney-client privilege. It's usually done only when there's expectations of evidence tampering/destruction or that measures like a subpoena wouldn't be answered in good faith. In fact sometimes it might even involve things like single blinding the evidence by using two teams to examine the documents after they are obtained. The fact that there was a search at all instead of something like a subpoena suggests that the evidence already available before the search is very strong; Cohen is probably about to have a very bad time.

"Rosenstein gave him broad authority not only to investigate "any links and/or coordination between the Russian government and individuals associated" with Trump's campaign, but also to examine "any matters that arose or may arise directly from the investigation." [emphasis mine]

No, there is no limit that requires Mueller to ignore evidence of other crimes. As noted in the article above: "But even if Mueller came across something potentially criminal that was beyond his scope, 'it's not like he can just walk away from it. They can't just ignore these things.'" 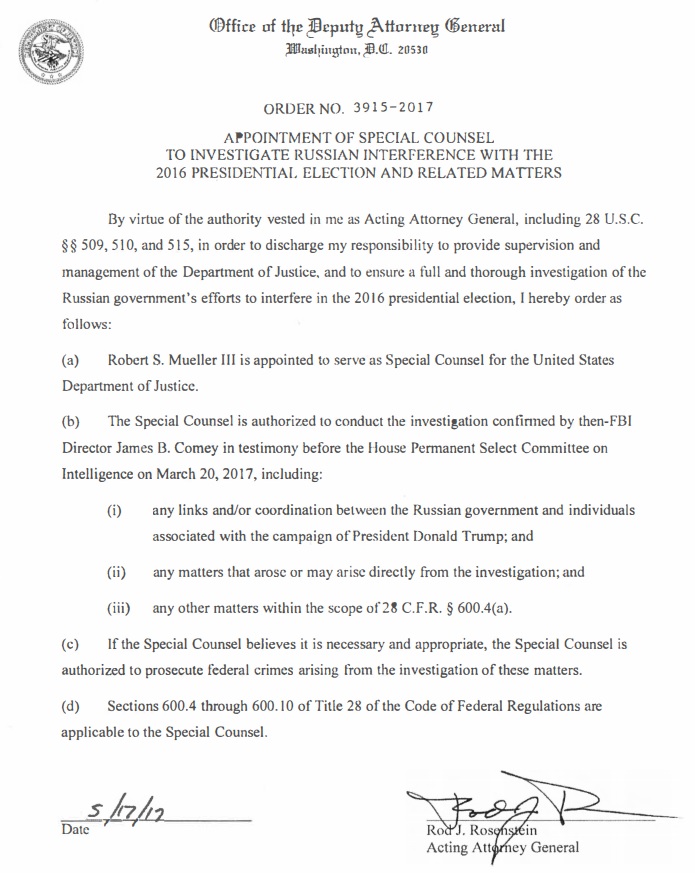 That's really irrelevant, since Mueller did not order the raids or get the warrants.

What happens, and often happens is that, while investigating crimes, investigators sometimes find evidence of other crimes.

Mueller's team alerted the FBI and justice department that they found this evidence, as they are duty-bound to do. They were instructed not to pursue it, but to refer it to appropriate groups, and THOSE groups followed up.

If I were in a white-collar financial crimes division, investigating someone for corporate espionage, and found evidence of participation in a child pornography ring on their computer, I think people would be hard-pressed to argue that I should not pass that information along to other law enforcement people.

And, yet, that's pretty much the standard that Fox News is trying to present as appropriate.

Some legal experts (Alan Dershowitz for one, IIRC) would say that Rosenstien exceeded his own authority by not referring the Cohen matter to Sessions, the Attorney General.

However, in Session's public statements (March 2, 2017) about his recusal, he said the following:

During the course of the last several weeks, I have met with the relevant senior career Department officials to discuss whether I should recuse myself from any matters arising from the campaigns for President of the United States.

Having concluded those meetings today, I have decided to recuse myself from any existing or future investigations of any matters related in any way to the campaigns for President of the United States.

So one must conclude that for Rosenstein to retain his supervisory role in this matter, then it must be about "the campaigns for President of the United States."

As to why Mueller decided to hand this over to the US Attorney's Office of the Southern District of New York, it isn't clear that this was necessary, except that it might provide the legally required firewall that will allow Mueller's team to only receive information taken from Cohen that is relevant to illegal campaign activity, where Cohen may be incidentally involved in an alleged crime.

Also, in 1974, Congress amended the existing Federal Election Campaign Act (FECA) to provide that the Federal Election Commission shall administer and enforce FECA laws. So it is also argued (by some on Fox) that neither the DOJ nor the FBI have any jurisdiction in these types of matters.

Therefore, Mueller and Rosenstein must have determined that there is probable cause to believe a "knowing and willful" criminal violation took place.

In any form of government, which is based on the rule of law, law enforcement is obliged to persecute any crime they become aware of, either directly themselves, or by passing the lead-material/evidence on to the appropriate agency.

The only imaginable exception to the principle stated above, would be if the lead-material/evidence was acquired in an unlawful way. But that would be up to the courts to decide.

My understanding of the probe is that Mueller's group is empowered to go after any and all criminal activity discovered during the course of the investigation. In spite of the probe being centered around Russian meddling in the election, the FBI can pursue campaign finance / money laundering investigations.

Not the answer you're looking for? Browse other questions tagged united-states donald-trump campaign-finance mueller-investigation .

4
Is Donald Trump under investigation by special counsel Robert Mueller?
46
What exactly is "collusion"? What is Robert Mueller expected to prove?
4
What scope does Title I Fisa have as it pertains to other US citizens not explicitly targeted by the warrant?
4
Is paying for ex-staff's silence a legal use of campaign funds?
6
Did President Trump ever answer questions on obstruction to Mueller?
26
Why isn't the Mueller report being released completely and unredacted?
13
Does the Mueller report show a conspiracy between Russia and the Trump Campaign?
3
Is anyone in particular being investigated by Durham (who is investigating the "origins of the Mueller inquiry")?