What did the 2012 Obama campaign election app ask of its users vs. what did it actually do?

What I mean is, if I downloaded the app:

I don't seem to find a lot of information about the app except that about 1 million people downloaded the app, and this gave the Obama campaign access to the data of almost 190 million people

Then according to this site

So did the people who downloaded the app know the campaign was going to do this?

I am trying to figure out if there was a difference between what the app made you believe it was going to do, and what it actually did.

What information did the app ask of me?

It asked if it was OK to use specific information from your facebook profile in support of the Obama campaign.

"When they clicked on the app, a screen would pop up that would say what data they're authorizing the app was giving us access to and exactly how we were going to use that data ... We built with voter history and ... other data points that Democratic campaigns use to build models. But we matched the data of your friends to that model and then reflected it back to the person who had authorized the app and said, if you want to reach out to your friends about this election on Facebook, here are the ones that you should reach out to first. And that was it... 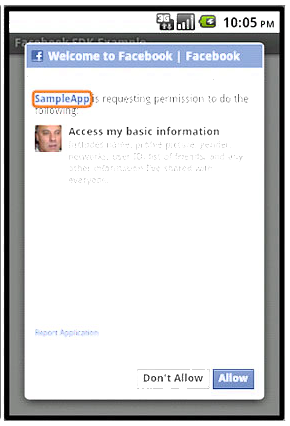 SampleApp is requesting permission to do the following

Access my basic information
Includes name, profile picture, gender, networks, user ID, list of friends, and any other information I've shared with everyone.

What did the app want me to do?

Talk to, and send messages to, your friends encouraging them to vote in the election.

According to "Inside the Cave" by Engage Research:

What did I knowingly agree to, that the app will do?

You knowingly agreed to send messages to your friends. For example by clicking a "SHARE NOW" button above a list of friends.

According to "Inside the Cave" by Engage Research, it looked like this: 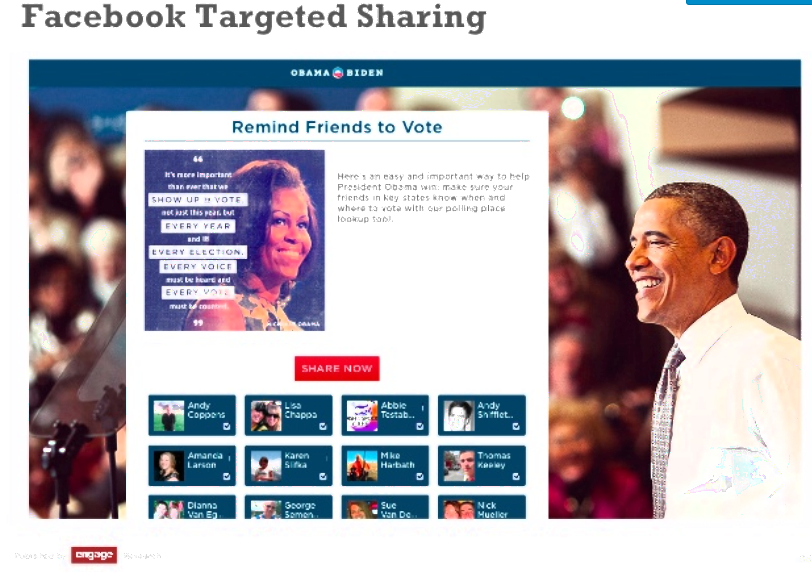 It's more important than ever that we SHOW UP & VOTE not just this year, but EVERY YEAR and in EVERY ELECTION, EVERY VOICE must be heard and EVERY VOTE must be counted

Here's an easy and important way to help president Obama win: make sure your friends in key states know when and where to vote with our polling place lookup tool.

It was pretty evident to the Facebook users of the Obama campaign app exactly what was happening: the users themselves were using the app to explicitly send messages to their friends.

Readers of this answer may be interested to contrast this Facebook app with, for example, the "Personality test" Facebook app by a Cambridge University researcher. Users of the "personality test" app had no knowledge that Cambridge Analytica would later improperly obtain their data with the intention to target political messages at the users' friends in support of the Trump campaign. (Note, this intention was not carried out using this data as the Trump campaign team claimed the RNC had already obtained better data they could use instead for their purposes.)

Not the answer you're looking for? Browse other questions tagged united-states campaigning barack-obama .

71
Is there a difference between how Cambridge Analytica and the Obama Campaign got Facebook users' data?

18
What has divided US politics so severely since Bill Clinton's election?
32
How did George W. Bush make torture legal and what did Obama undo?
46
What exactly is “collusion”? What is Robert Mueller expected to prove?
71
Is there a difference between how Cambridge Analytica and the Obama Campaign got Facebook users' data?
14
What type of corruption did Trump campaign against?
4
Is there systematic evidence that (campaign) “pivoting” doesn't work as well as it used to?
10
What are the details of the Republican healthcare plan described by Trump in mid-July 2020?
3
How did Obama improve the economy