Who (and why) redacts congressional reports and under what authority?

The once "TOP SECRET" House of Representatives majority report from the House Select Committee on Intelligence regarding "Russian Active Measures"has been released here. It appears that it has been declassified, however portions are redacted. Unlike the so-called 'Comey memos', where the redactions are referenced to the authority to redact (Executive Order EO13526) and each redaction is characterized by citation to specific subsections that EO, the redactions in the House report cite no authority or basis for the redactions in the now declassified report.

So my question, that is relative to a US governmental process, policy or procedure, is focused on the justification to redact and where the authority to redact derives.

Example: In the original "Top Secret" version there is a list of persons referenced in the body of the report. That list, in the original version is clearly marked "(U)", which we have learned (from the Clinton email testimony) is a section of an otherwise classified report that is infact, unclassified.

In the now declassified report, about thirty names (that were previously unclassified) are now redacted. --without reference to authority or justification to redact now. 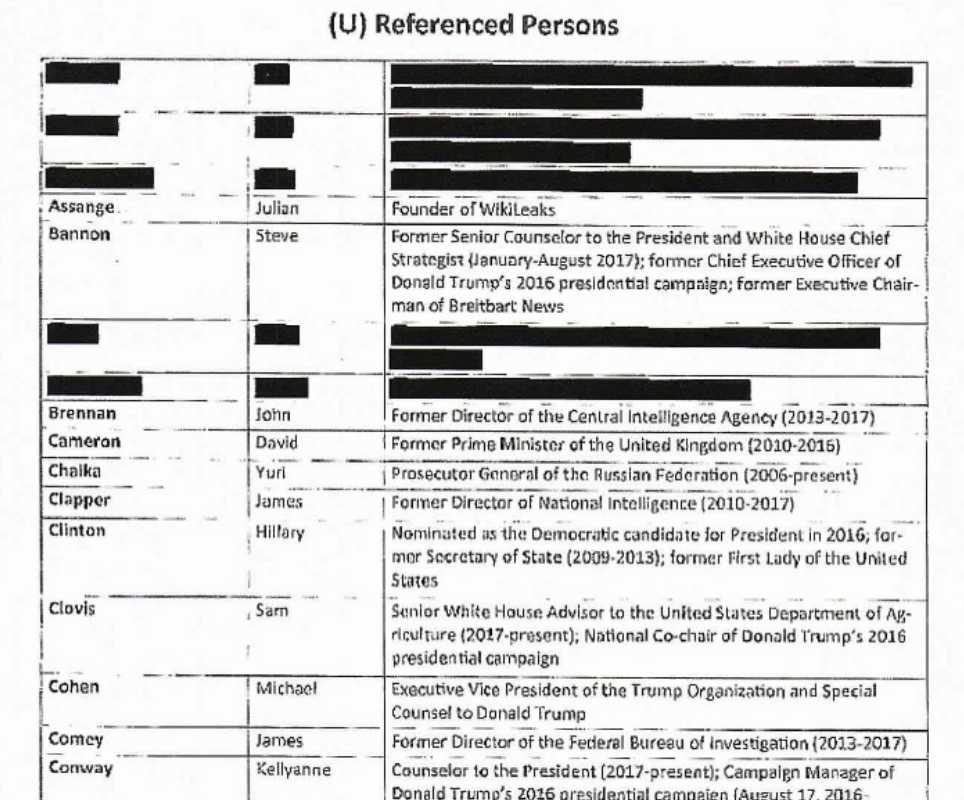 So only documents released under a Freedom of Information Act (FOIA) request need to carry the justification or authority for why the information was redacted. Documents with classified information that the government chooses to release to a general public do not need such authorities or justifications for redaction of information.

It's also important to know that two or more pieces of Unclassified (U) information may raise the information to a level where the information can be classified and a lot of this document looks like it's combining more than a few sources. In addition, while employment at an Intelligence Agency is not something that is classified in and of itself, it is still protected information for people who aren't on a political stage within the agency. Jimmy Jones (1), an FBI computer analyst (2), may be named on that list somewhere because of work Mr. Jones did, presumably analyzing computers, did find some information that aided in the investigation (3).

Alone, none of those three facts may be classified, but together, they can name an individual who can be approached to gather information about the case from... either by a reporter or someone worse. So for that reason, Mr. Jones is hidden on the list.

Other redaction could protect sources and methods used to gather the information and in one case, I saw the redaction of a number and a list of names that were being investigated at present time. Typically you don't let people know they are under investigation, so those leave.

Since this is an aggregate document from multiple agencies, it's the individual agencies job to "sanitize" the information before it is delivered to Congress. Ultimately Congress, being the source agency of this document, is charged with sanitizing for the public release, but they must respect all agency classification decisions and remove any source material that the agency said they could not release.

Edits to answer concerns by OP:

8
Can anyone explain why part of this Classification Designation is redacted?

11
Under what executive authority does the President have to delay the employer mandate?
7
Who decides on US congressional hearings topics and schedule?
2
What is the difference between the Congressional Record and the Federal Register?
4
Who schedules US congressional votes and how flexible is this process?
118
Why couldn't Republicans who voted to repeal Obamacare so many times under Obama do it under a Republican president?
3
Why does the Congressional leadership sometimes pull a failing bill from consideration and sometimes allow it to fail, even over and over?
8
Can anyone explain why part of this Classification Designation is redacted?
6
What is the point of congressional confirmation hearings?
1
Congressional closed meeting and transcript release
5
Has the House Judiciary Committee abused congressional oversight “authority”?