Can Texas really split itself into five states?

The new episode of revisionist history claims that Texas can split parts of itself into four other states, at most, leaving five Texan states altogether.

The basis for this reasoning can be found in the opening of the Let's Mess With Texas Essay by Vasan Kesavan and Michael Stokes Paulsen:

Which they say is from:

Could Texas really split off four other states from itself right now?

The Texas Annexation is already spread across Texas and four other states: New Mexico, Oklahoma (the panhandle), Kansas, and Colorado. Texas is the only one that looks to be wholly formed from the annexation territory, but the other four include parts of such land. As such, there is no remaining right to split Texas. They've already been split as much as specified in the Joint Resolution for Annexing Texas to the United States. 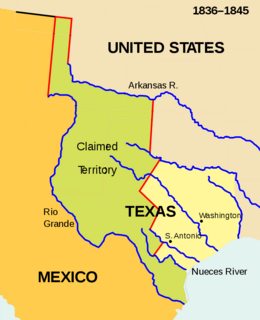 From Wikipedia. The full size version of that map actually shows the Texas Annexation stretching into a sixth state, Wyoming.

But there's a way

If Congress and the Texas legislature agree, Texas could split. This is just to say that there is no remaining split from the original resolution. That split has already occurred. Any additional split would be new and in addition to the split specified previously.

1
Are there any rules/laws that would prevent 100% surveillance of Capitol/WH for transparency purposes?

20
What would be required for states to split off and become their own nation?
3
Can Trump really implement his tax reform?
2
Can California really ban their residents from traveling to states without LGBT protections?
32
What are the claimed benefits of splitting California into 3 states?
12
How can the Trump Impeachment hearings be so split on party lines?
27
How are states (Texas + many others) allowed to be suing other states?
7
What does the Texas Reliability Entity do exactly? Can it enforce NERC standards in Texas?
26
How do states with no state income tax like Florida or Texas generate tax revenue?
9
Can Democratic politicians vote in Texas while they're arrested?