How much do US presidential campaigns spend per vote gained?

There are some lurking variables that make this question very hard to answer.

Perhaps a more pertinent question is: What is the most efficient way for a campaign to spend its money? After all, the ultimate goal is not getting the most votes, but winning the election.

As K Dog cited in his answer, most people have made up their minds on an election by the time the candidates have made it out of the primaries, and normal voter persuasion methods are ineffective at swaying people one way or another. (source) However, while it is generally the case that most people's minds are made up well before the campaign money machine starts kicking, it varies depending on who the candidates are. See the below graphic from 538: 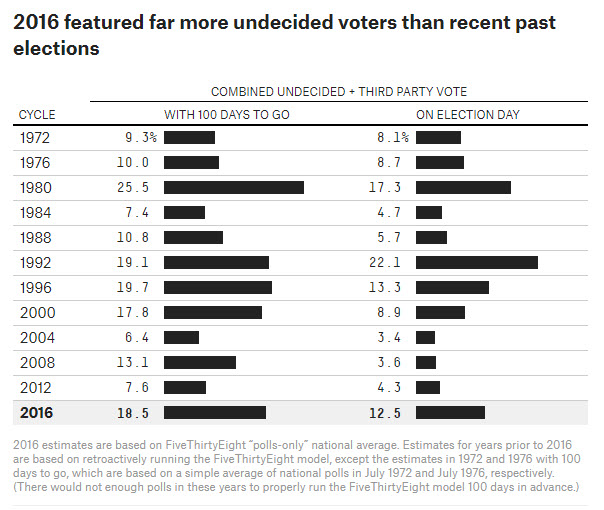 Usually undecideds are a non-issue, but in particularly divisive campaigns (or in the case of the 1992/1996 elections above, Ross Perot I assume) they can be a significant factor.

All that said, with people generally being set on their candidates well ahead of time but voter turnout hovering around 50-60% for general elections and 35-45% for primaries, the best bang for your buck as far as donations go is going to be increasing voter turnout. Vote-by-mail/Vote-from-home initiatives have been shown to increase turnout relatively evenly across the board for both dems and gop.

This doesn't necessarily answer your question of how much a vote is worth, but if your real question is "how much impact does my donation have, and how can I maximize it?", spurring a push towards implementing a system like this - or other voter turnout initiatives - where you live may be the most efficient use of your money.

One method would be to divide total money spent by number of votes, and that would give cost per vote (CPV) stats. So if 100,000,000 people vote, and $1B in total is spent, the CPV would be $10, or if we divide by the 538 electors, the CPV would be $185,873 per electoral vote. This can be done individually by candidate as well, which usually results in different CPVs.

For example, here's a summary of a Libertarian website's calculations for 2016:

The Almanac of American Politics extensively compiles similar stats, by state and district, but I haven't yet seen a recent edition from which to cite.

Caveat: I've yet to see a CPV calculation that allows for spending on voter suppression. Start with the assumption a campaign's favorable votes have been efficiently maximized, (no more voters will switch no matter how much is spent). Second suppose a campaign is, (or its allies are), ruthless and unscrupulous. Therefore since the campaign can't get more votes, it attempts to make rival voters ineligible to vote, so that its rivals have less voters and therefore fewer votes. What does that campaign spend per vanished vote, or what is the Cost Per Suppressed Vote (CPSV)?

Presumably the less popular side has the most interest in CPSV.

There's also the possibility of fraudulent votes and hacked votes, which imply additional stats of Cost Per Fake Vote (CPFV) and Cost Per hacked Vote (CPHV). I know of no credible evidence that CPFV has been a significant factor lately, and fear that obtaining any direct credible evidence of CPHV (if a successful attack was competently executed on current election hardware) would be intrinsically unlikely, due to many machines absence of paper records.

As pertained to voter contact strategies, and not other endeavors that a campaign may engage in, a recent study published in Oct 2017 in the American Political Science Review entitled The Minimal Persuasive Effects of Campaign Contact in General Elections: Evidence from 49 Field Experiments held:

The best estimate for the persuasive effects of campaign contact and advertising—such as mail, phone calls, and canvassing—on Americans’ candidate choices in general elections is zero. Our best guess for online and television advertising is also zero, but there is less evidence on these modes.

The study covered off on 49 field experiments. The article offers the usual "scientific" reminders that are replete in the literature, including “Our argument is not that campaigns do not influence general elections in any way, but that the direct persuasive effects of their voter contact and advertising in general elections are essentially zero.... we stick with investigating things that can be infinitely regressed."

So all told, both campaigns in the last presidential election spent about $1.4 billion for zero additional votes.

I've tried to research this, though mostly in legislative elections (because there are more of them, so they're easier to measure) and I've come to the conclusion that while running a campaign requires money, money doesn't buy votes. Once a candidate has enough resources to mount a reasonable campaign, it appears that the amount of money spent doesn't matter much. It's tough to measure, because in general the candidate who spends more wins, and the degree to which they beat their opponent is correlated with the amount that they outspent their opponent. However, in order to spend more they generally have to raise more. And politicians who are more popular to begin with are more likely to receive more donations. So the increased spending may be a result of their increased popularity, not a cause of it. If this is the case, then donating to a Presidential election after they've already raised 400M+ (primary and general elections) is probably not doing anything, to be honest. And it's possible that number is lower, if 2016 is an outlier. Similarly, donating to Senate races with about $10M and House races with $1.5M are probably not going to do anything.

Not the answer you're looking for? Browse other questions tagged united-states presidential-election voting campaign-finance .

3
Presidential Campaigns: "Paid For"
3
What do you call it when everyone gets an equal vote on how taxes are spent?
4
What is the effect of election campaign donations?
10
As a supporter, what is the most impactful way of helping a political campaign win?
2
Historical data on how the reliability of polling data depends on time remaining until a US presidential election
2
How are the 2020 US presidential campaigns now like "a land war in Asia"?
9
How many mail-in votes were disqualified for failing the signature match test at the US presidential elections in 2020?
1
"Shut out" districts in 2021's NYC Republican mayoral primary -- how did they vote in the Democratic primary and 2020 presidential race combined?