What political actions (if any) in the US caused this stock market stagnation? [closed]

I am looking at the stock market, and there's a clear point where things started declining and then stagnating. 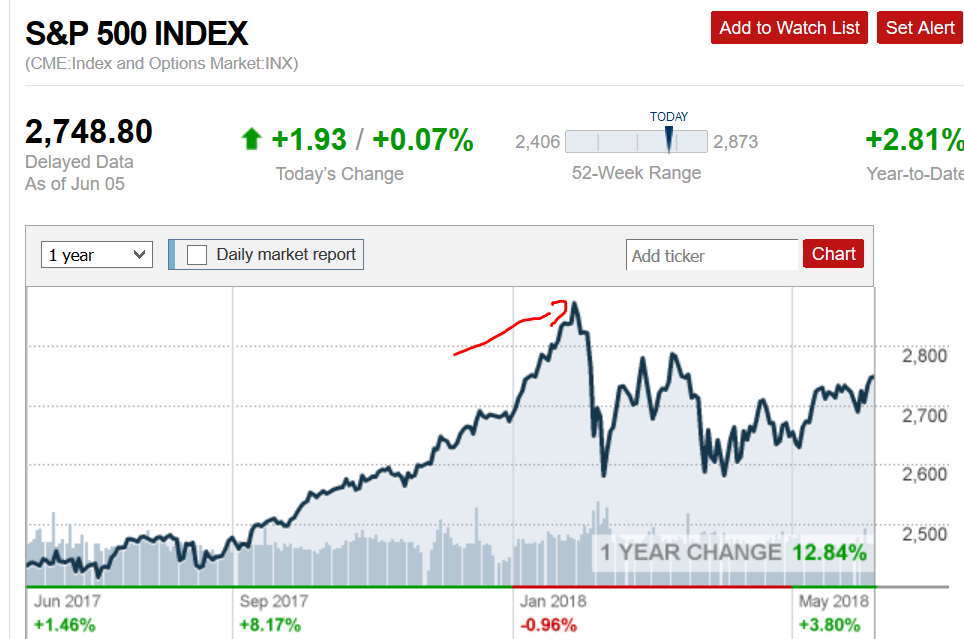 What was the cause for this point? Was it political? I don't remember hearing about any unexpected stock market crash, so I am guessing some political event occurred? I can't quite decipher the exact date, but .... my guess would be it's due to North Korea nuclear threat?

I googled "january 2018 selloff" and got these as the top hits:

Jan 30: Stocks drop the most since August, Dow loses 362 points

"We've had a unilateral move higher [in stocks] to start things off and people are realizing this is not sustainable," said Art Hogan, chief market strategist at B. Riley FBR. "You're also seeing some cracks in the global story with interest rates rising."

The latest sell-off comes amid stronger signals for the health of the global economy, which investors fear could fuel higher levels of inflation that would prompt central banks to raise interest rates. Investors said the drop could be a sign of the market returning to more typical periods of peaks and troughs after abnormally calm conditions last year

Feb 5: Why the stock market is selling off has the best overall analysis:

Wall Street was overdue for a reality check. The Dow Jones industrial average was up over 26 percent from January 2017 to January 2018. That's a massive jump in one year. Historically, the stock market has gained 8 percent, on average, in a year. We just experienced three times that amount. Investors were beginning to look around and question whether stocks really should be at such high levels.

The sell-off started because of the Friday jobs report. On Friday, the Labor Department put out its monthly report on how many jobs were created in January in the United States and how fast wages are growing. Overall, it looked like good news. The economy added 200,000 jobs, and wages grew by 2.9 percent, the most since 2009. But Wall Street looks at things differently than most people do. When companies pay workers more, it usually means lower profits for shareholders.

Wall Street is really worried about inflation. It's not just higher wages that scare investors. It's also the prospect of more inflation. ... But the wage data Friday spooked investors into thinking that inflation could rise quickly this year as the tax cuts take effect and more and more companies start raising pay and prices.

In short, Wall Street is freaking out about what could happen in 10 to 18 months, not right now.

There's a new leader at the Fed: Jerome H. Powell. Compounding all of these worries is there is a new leader at the Fed. Economist Janet L. Yellen's last day was Friday. The markets loved Yellen because she kept interest rates low and she was slow to raise them. But Powell, a lawyer, is untested. Most think he'll be similar to Yellen, but no one knows for sure. He just started in the top job.

The frenzied market sell-off last week was driven by human emotion and not algorithm-based trading, according to the CEO of the Nasdaq.

Not the answer you're looking for? Browse other questions tagged united-states economy financial-crisis .

3
What is the necessity of the FDIC in the US banking system?
23
What caused the racial shift of America's parties?
9
What major flaws does this particular Universal Basic Income model have, if any?
2
Can the derivatives market save social security?
3
What would happen if we banned CEO stock-options tomorrow?
4
Is Chinese Communism with market economy based on any Marxist theory?
2
Can the President of the United States actively invest in the stock market?