Does the US President have the ability to blanket prohibit trade with entire countries?

I'm curious, since some sources seem to think that's what President Trump is threatening right now:

Referring to what he called “ridiculous and unfair” tariffs on U.S. imports, Trump said, “It’s going to stop — or we’ll stop trading with them. And that’s a very profitable answer, if we have to do it.”

“We’re the piggy bank that everybody is robbing, and that ends,” added Trump, who also repeated his exaggerations of U.S. trade deficits by tens or hundreds of billions of dollars. The president framed his trade attacks as a defense of U.S. national security, citing the weakening of the country’s “balance sheet” as the corresponding threat.

Does Trump have the presidential authority to effect a change like this?

Yes, although not sure if he can do so unilaterally or would require to work in concert with Congress.

As a practical example, US prohibits nearly all trade with North Korea (the latest of which was signed by Trump)

Constitution of the United States, Article I, Section 8 (the "Commerce Clause", in pertinent part)

To borrow Money on the credit of the United States;

To regulate Commerce with foreign Nations, and among the several States, and with the Indian Tribes;

Article II, Section 1 of the Constitution of the United States

explicitly grants the President "executive Power", which in addition to the Office having the power granted by Article II, Section 2

grants the Office "implied" powers (see U.S. Foreign Policy Powers: Congress and the President by Jonathan Masters, Council on Foreign Relations, March 2, 2017) to act directly in foreign policy. Congress can and previously has granted the President authority to act relevant to the foreign policy objectives of the United States. The Executive also has the power to issue an Executive Order.

Separation of powers (see The Federalist Papers : No. 47 The Particular Structure of the New Government and the Distribution of Power Among Its Different Parts From the New York Packet. Friday, February 1, 1788. Madison) is designed to be flexible; with the Supreme Court of the United States being the arbiter of the of powers granted to the two adjacent wings of the single trilateral body politic, if a controversy as to the exercise of those enumerated powers arises under the Constitution of the United States (see Political Questions in International Trade: Judicial Review of Section 301? by Erwin P. Eichmann and Gary N. Horlick, Michigan Journal of International Law, Volume 10, Issue 3, 1989).

The answer to the question depends on agreement between the Legislative Branch and Executive Branch as to what the foreign policy objective is; and which Branch of Government is asked the question, whether that be before or after the fact of Executive action.

The judicial Power shall extend to all Cases, in Law and Equity, arising under this Constitution, the Laws of the United States, and Treaties made, or which shall be made, under their Authority;—to all Cases affecting Ambassadors, other public Ministers and Consuls;—to all Cases of admiralty and maritime Jurisdiction;—to Controversies to which the United States shall be a Party;—to Controversies between two or more States;— between a State and Citizens of another State,—between Citizens of different States,—between Citizens of the same State claiming Lands under Grants of different States, and between a State, or the Citizens thereof, and foreign States, Citizens or Subjects.

Strictly speaking it's called an embargo. It can be total or partial. Currently the US has several embargos (partial) throughout the world. This is the map: 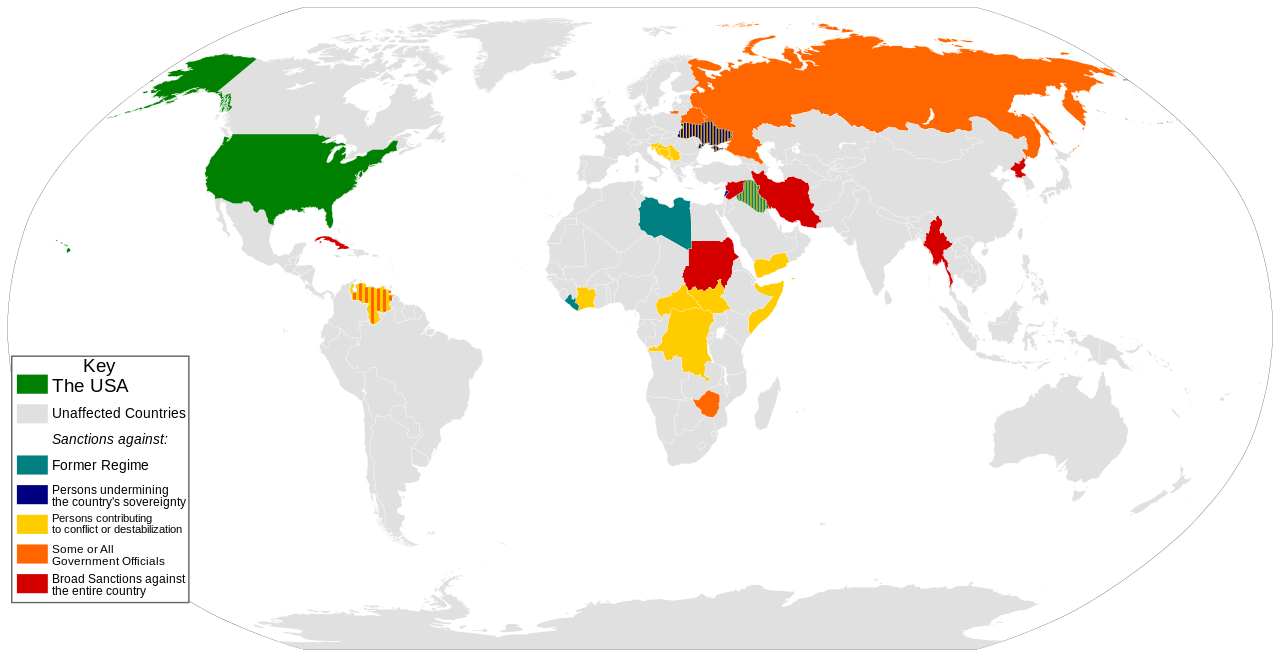 There are several laws that enable the US president, administration, and/or congress to perform a full or partial embargo:

...is a United States federal law authorizing the President to regulate commerce after declaring a national emergency in response to any unusual and extraordinary threat to the United States which has a foreign source.

You might also take as example the Cuban Democracy Act:

The Cuban Democracy Act was a bill presented by U.S. Congressman Robert Torricelli and passed in 1992 which prohibited foreign-based subsidiaries of U.S. companies from trading with Cuba, travel to Cuba by U.S. citizens, and family remittances to Cuba.

I would argue, however, that it is very unlikely that any reasonable (and probably even an unreasonable) administration or congress would make use of these powers against (supposedly) allies other than in the most dire circumstances. Mostly because it would be a kind of "scorched earth >solution!°_°<" damaging other as much as yourself.

The President can only shut down trade with a particular nation with statutory authorization from Congress in a law or treaty.

For the most part, all laws allowing all trade to cease with a country, which is to say embargoes, are specifically authorized as to specific countries by statutes that identify those countries. So, no, the President can't do that under the current state of the law.

The President does have a statutory authority to enact tariffs on particular kinds of goods chosen by U.S. government officials for particular reasons as retaliation for certain unfair trade practices which he must certify as meeting statutory conditions, but those retaliatory tariff statutes do not authorize a total embargo of a nation that is not specifically authorized by Congress.

Not the answer you're looking for? Browse other questions tagged united-states geopolitics trade .

3
Do any countries beside the US prohibit the sale of Kinder Surprise eggs?
18
Does stopping metal imports alone cover the trade deficit of the USA?
8
Does the DEA have authority to prohibit any substance?
2
How does Brexit affect trade between the UK and countries outside of the EU?
3
Does the WTO itself have any input into trade agreements?
9
Does the EU require preferential trade within itself?
3
Why did the UK not trade more with countries outside the EU?
3
Does neoliberalism aka free trade across borders with necessitate/demand austerity?
8
Which EU countries trade more with China than with the US?