Why did the Tunceli province, in the center of Turkey, vote so much against Erdoğan in the presidential elections?

I was checking the official results of the Turkish presidential election, 2018 in the section Seçim 2018 of the news agency AA. In there, we see how Erdogan managed to win in almost all the regions: 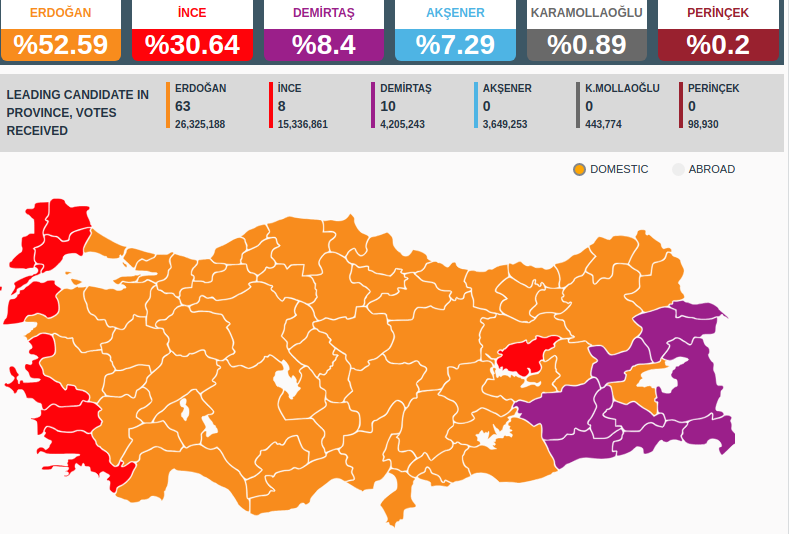 However, there is this little red in the middle of the map. It is the Tunceli Province, where Ince got 58% of the votes, Demirtaş 21% and Erdoğan a mere 18%, while all the surrounding regions overwhelmingly voted for Erdoğan (I see percentages of above 60% everywhere, with Ince at around 25%).

What is special in Tunceli to be so much against Erdoğan? I thought it may be because Demirtaş was born in there, but it is not the case.

One reason may be due to the demographics of the Tunceli region, which includes significant populations of Dersim Alevi Kurds, Armenian Alevis and Christian Armenians. Tunceli is the only region in Turkey with a majority population of Alevi.

The beliefs of the Dersim Alevi Kurds more closely align with that of Zoroastrianism than Islam, and along with Kurdish and Christian identities, they may view Erdogan's move away from Ataturk's secular nationalism to that of socially conservative Islamism unappealing. Also, ethnic Armenians will also only be too aware of the Armenian genocide in recent history.

Being both Alevi and Kurdish, they may face particular prejudice for being neither ethnically Turkish nor following the branch of Sunni Islam, as is practiced as a majority religion in Turkey.

The Kurdish naming conventions of towns and cities in the region have been historically repressed and erased, in particular after the Dersim rebellion to replace them with more Turkish names. The original Kurdish name, Dersim, was replaced by the Turkish Tunceli. In 2013, Erdogan's government promised to review the naming process for the region, with a view to renaming it with the Kurdish name. However, as of today, this hasn't progressed, and the Kurds in the region may view this promise as insincere.

A vote against Erdogan may be seen as a chance for these minorities to retain and reassert their identities in the region, in the form of the expression of language, culture and naming conventions for towns and cities. The mountain range which passes through the Tunceli region is also considered particularly sacred by those who practice Alevism, hence the significance of the area.

Tunceli also has one of the highest literacy rates amongst Turkey's provinces, was deemed to have the highest education index from a study by the Turkish Statistical Institute, however Tunceli also came lowest in the life satisfaction index in the same study.

A really big majority of Tunceli are Alevites and it is the only province in Turkey which still can be seen as an Alevite province as the origin of anatolia is Alevitism but was assimilated during ottoman empire. This succes you see of the people of Tunceli, isn't down to them being Tuncelian, it is down to them being Alevites. As Alevi towns, villages in other parts of anatolia have got a similar result in the polling and because Tunceli is the only fully Alevite province, Tunceli can seen as a representitive of the Alevi people. All of the Alevi people have similar political beliefs. A big proportion of Alevites are socialists,with some being secular Kurdish nationalists and a tiny proportion being secular Turkish nationalists. Alevites are a group in islam who are not strict, they are openminded and secular. There is no full head scarf in Alevitism (some Alevite villagers wear a half headscarf which still shows their hear. It is more a fashion thing than a religious thing). Today, many young people, who has been brought up in an Alevite family convert to Atheism. There is large number of people who believe that Alevitism is not a part of Islam. I have explained this because it is important to understand the background of the people of Tunceli before understanding their beliefs. Tunceli has the highest percent for 'sending girl children to school'. Eventhough Tunceli is a poor province , for the last couple of years it has been the 'highest achieving province in the University entrance exams'. It is also one of the 'most reading' provinces in Turkey.

For decades Tunceli has been seen as a socialist city, as many revolutionists were born here. And for years it has voted for left-wing parties. In the local Mayor electionist, the town Ovacik, in Tunceli voted for the first ever communist mayor, 'Fatih Macoglu' in Turkey. In the referandum in 2017, which gave the president very high power, Tunceli's 80 percent said 'no', making Tunceli no1 province in Turkey for no votes. Evonthough on the internet Tunceli is described as a Kurdish city, a high percentage of Tunceli are Zaza's (who have been pressured by some Kurdish natiolists to identify their selves as Kurd), some of the population are Turkmens (Turkish) and a small amount is Kurds.

(also yes, the leader of CHP is from Tunceli. CHP has many Alevite mps and members)

Not the answer you're looking for? Browse other questions tagged presidential-election turkey recep-tayyip-erdogan .

5
What are the Presidential check and balances in Turkey?
7
What "crimes against the sovereignty of the state and its bodies" were children accused of in Turkey?
10
How much do US presidential campaigns spend per vote gained?
66
Why are U.S. territories not allowed to vote in U.S. presidential elections?
3
How did Black Americans vote in presidential elections prior to 1936?
6
Why has President Erdoğan threatened UAE when Turkey itself has diplomatic relations with Israel?
17
Why is Recep Tayyip Erdoğan allowing the Turkish Lira to plunge?