Understanding gerrymandering in the Maryland example?

I was reading an article in the NY Times explaining the math behind gerrymandering.

They used the Maryland 6th District as an example, that had 26k wasted votes and all 133k republican wasted votes. Overall, Maryland has a 10.7 % efficiency gap that favors the Democrats.

I understand all of this. What I don't seem to understand is what would've changed if Maryland had a 7% efficiency gap? Would the 7% threshold "make" the state Republican instead of Democrat?

How is all this math related to the Maryland 6th district gerrymandering case that's gone to court twice? Or how would the votes change had the supreme court overruled it?

And how is this packing and cracking of votes related to the redrawing of districts?

What I don't seem to understand is what would've changed if Maryland had a 7% efficiency gap? Would the 7% threshold "make" the state Republican instead of Democrat?

No, or at least not necessarily.

The efficiency gap is directed. 10.7% or 7% doesn't actually tell you anything about who it favors. Either one can favor the Democrats or the Republicans. However, if it is less than 7%, they say that it is neutral. (They being the people who wrote up the efficiency gap system with a purely arbitrary cutoff.) I.e. less than 7% in either direction is neutral or within normal bounds. However, even 1% could be said to be in the direction of the Democrats or the Republicans.

Also, the 7% threshold is only half of it. They also have a two-seat threshold. So unless the efficiency gap is large enough that it takes at least two seats to bring it back to neutral, it doesn't count. In Maryland, the gap is only one seat.

Those two parts of the threshold are basically just saying that they can't gerrymander their way to a 0% efficiency gap. There will almost always be some discrepancy between the total vote and the actual result. For example, if the vote were exactly split, each party getting 50%, there is no way to give each half the seats. Because seats themselves are indivisible. We can't have four and a half seats for each. The closest we can get is five to four, as Maryland has an odd number of seats (nine).

This is problematic from a Republican perspective, because the way that efficiency gap analysis is calculated somehow finds that no Democratic gerrymanders exist (or at least they are not actionable under the arbitrary thresholds chosen). Yet Republicans can see Democratic gerrymanders in Maryland, Illinois, and California. For that matter if there were a proportional standard, Republicans could see improvements in Connecticut and Massachusetts.

Third parties fare even worse. Both the Libertarians and the Greens have enough support in California to get at least one seat under a proportional standard. But efficiency gap analysis doesn't give them any seats because their support is too spread out rather than concentrated in a few areas.

To return to the literal question that you asked, a state with an efficiency gap less than 7% can be considered either neutral or leaning towards one party. We don't know which party from the size of the efficiency gap. But it is not considered to be gerrymandered regardless. It is a neutral (or within normal bounds) partition even if it slightly favors one party.

The threshold to switch from one party to another is an efficiency gap of 0%. 7% is just a proposed threshold to go from "leaning but fair" to partisan gerrymandered.

So in the comments, you ask how the court would fix a 10.7% efficiency gap. The answer is that they would either send the district map back to the legislature to be redone or redistrict the state themselves.

Efficiency gap analysis essentially chases its own tail. It's always running the next election based on the results of the last election.

By contrast, there are any number of systems that support a proportional test that fix themselves in the same election:

One of the advantages of a challenge like this is that the plaintiff has little to lose and potentially a lot to gain. The efficiency gap could go from 10.7% favoring the Democrats to 5% favoring the Republicans in a new map. And in a new election, that 5% might grow to 10.7%. Because the efficiency gap is based on voting rather than on more stable measures.

Either way, assume this group is predominantly located in one area of the state. We can either try to pack them entirely into one district or try to crack them across multiple districts. If we pack them into a district (draw the lines such that they are all in the same district), we can make that district vote for their party and every other district safer for the other party.

Similarly, we can pack voters of one persuasion with a lump of other voters to change a district from one party to the other. All that this really means is that the lines were drawn such that people living in this place, who happen to vote similarly would be in in the same district as the other voters.

There's an actual recent example of this. The Pennsylvania Supreme Court redrew Pennsylvania's districts. Looking particularly at what was district 8 and is now district 1, most of the district is Bucks county (and the entirety of Bucks is in the one district). Bucks is pretty even between Republicans and Democrats. Prior to the redraw, district 8 also included some of the Republican areas of Philadelphia and Montgomery counties. After the redraw, it includes some Democratic areas of Montgomery county in district 1.

Packing: concentrating voters of a particular political persuasion or demographic group into one district either to make the district vote their way or to overwhelm their vote and render it harmless by leaving them in a district that will never vote their way.

Cracking: dividing voters of a particular political persuasion or demographic group across multiple districts, either to dilute their vote by hiding it under an overwhelming advantage for the other party or to expand their influence by adding their vote to a near even split.

Most commonly we talk about packing in the sense of drawing voters out of other districts to form one district such that their preferred party wins in the one district but loses in the other districts. And cracking in terms of diluting the influence of one group of voters so that their preferred party loses in every district. But it's essentially the same action either way. 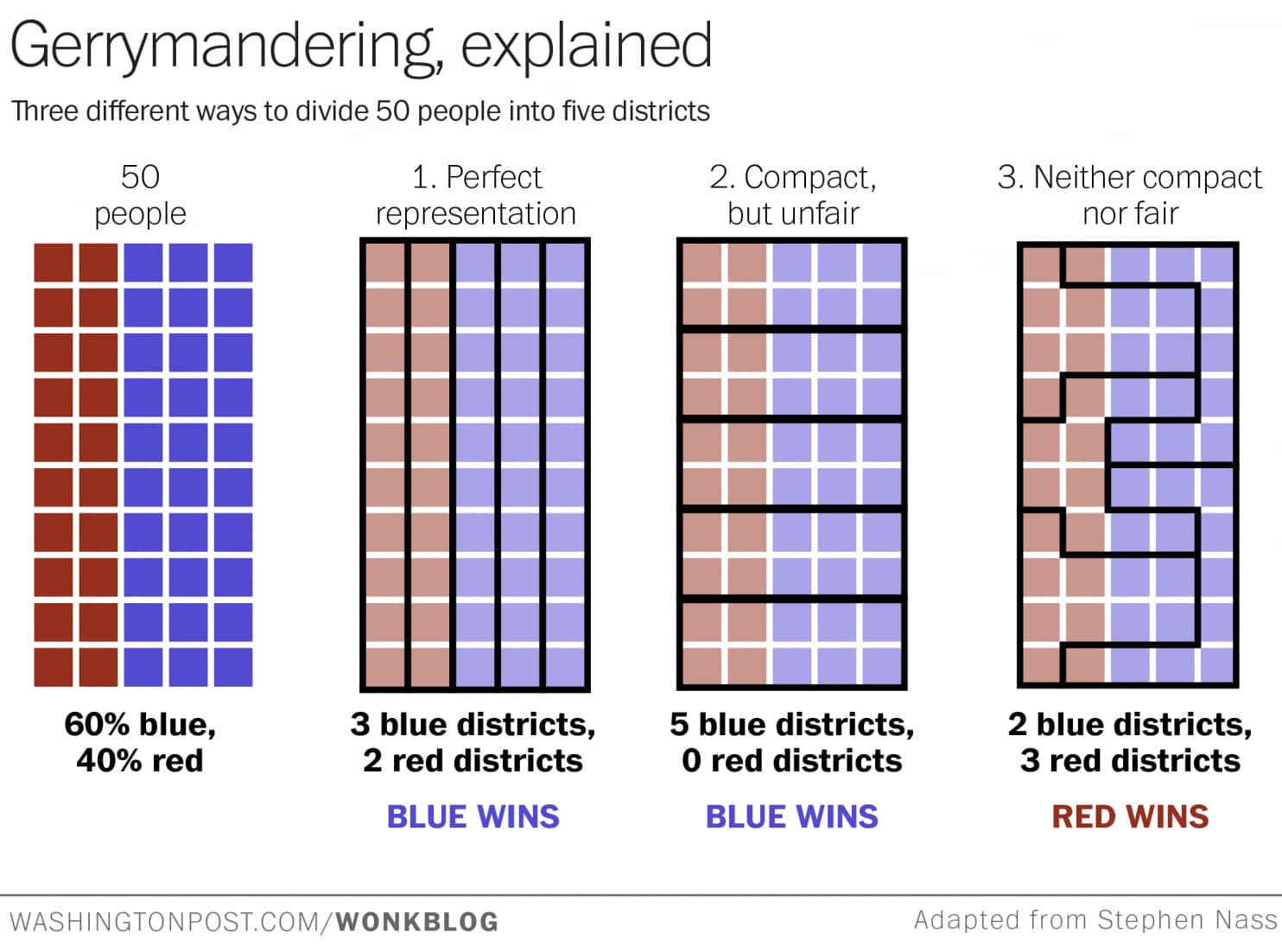 The leftmost image shows no districting and therefore no packing or cracking.

Number one is an example of packing. Both Republicans and Democrats are packed into their own districts. However, its results are perfectly proportional. Twenty of the votes are wasted, twelve for the Democrats and eight for the Republicans. The efficiency gap would favor the Republicans even though it is perfectly representative. So efficiency gap analysis would lead to a plan that swaps two Republicans with two Democrats. So four people would have representation not of their choice, assuming all else were equal.

Number two is an example of cracking. Republicans and Democrats are cracked across all five districts in such a way as to give the Democrats all the seats. This is a type of gerrymander, giving Democrats two more seats than their proportion of the vote would suggest.

This is slightly incorrect in that it acts as if we knew how people voted. In reality, we don't know that. We know how regions (called precincts) voted in aggregate. So real districting plans don't involve people but regions. And regions don't vote monolithically. Instead, each district has its own separate vote. This makes the math more difficult but doesn't really change the concept. It mainly means that the perfectly representative districting plan is purely theoretical and doesn't appear in practice.

In practice, if we want something approaching perfect representation, we change the voting method from single districts to multiple districts.

But, if your party has 60% of the statewide vote and 60% of the seats, EG=-10, which indicates that your state has been Gerrymandered. Think about that. A 60-60 state is Gerrymandered? That makes no sense.

Not the answer you're looking for? Browse other questions tagged united-states parties gerrymandering measurement .

26
Is it true that Republicans have an unfair geographical advantage in elections for the House of Representatives?
3
How can citizens learn more about the origin & current process of gerrymandering in the U.S. political system?