Were the British always among the most skeptical about free movement of people in the EU?

... or did they become this way only after the EU enlargement in Central and Easter Europe (after the fall of the Iron Curtain)?

If there's a need to back up the premise of the question... here's a Eurobarometer poll from 2016: 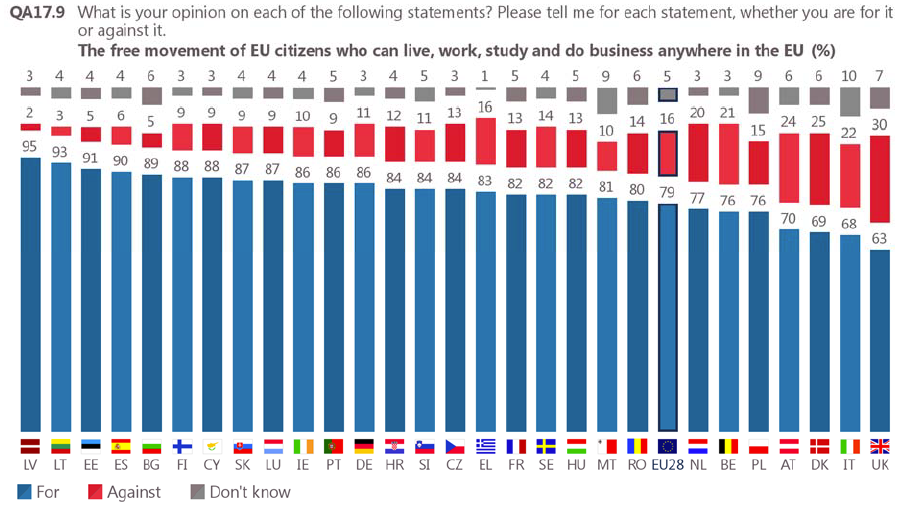 I'm not sure how far back such surveys go, but was the picture (modulo the smaller EU membership) similar in, say, 1990, with the UK trailing the Continental EU on this issue?

Note: this post tries to bring some more data into the discussion rather than trying to straight-out answer the original question.

The Eurobarometer is one way to gauge the "euro-scepticism" of a country's citizens. Another interesting data point might be what laws were passed by the country's government.

From the "laws passed" perspective it seems that the British are not the most skeptical. The linked Wikipedia article lists the years from which on citizens of country A could work in country B. From this table, it seems the UK is in line with other EU members with respect to allowing free movement of people.

In the case of Austria, the Eurobarometer ranks Austria also on the "sceptical" end of the spectrum. However, Austria passed laws restricting citizens from the new EU member countries from entering Austria's labour market for a transitional period. In that regard, the UK was more open.

While this does not prove whether the UK was "sceptical" from the beginning or not. The laws passed by the UK government are less restrictive than Austria's laws. This could mean either a disconnect between the "sceptical" population and the ruling government; or a less "sceptical" attitude at the time the generous UK laws were passed.

However, legal restrictions posed by the government and public perception might be two different pairs of shoes.

I can't find old-enough polls just about immigration from the EU, but on the more general question of immigration: "are there too many immigrants in the UK", the polls have shown numbers that have been consistently high over decades: 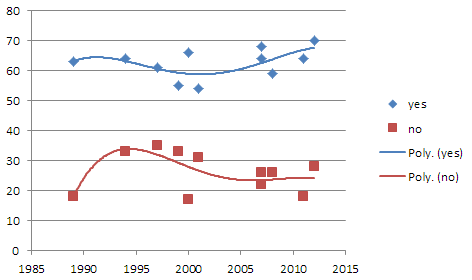 This is my own chart based on Ipsos MORI data. I've only plotted the total agree/disagree, leaving out "don't know" and non-responders. The trend lines are 4-degree polynomials, although, i have no theoretical basis for that choice, it just looked good.

Just from this data, it's hard to conclude a clear trend around the time (2004) of the Eastward expansion of the EU. Maybe there was a delayed effect, but that would require more data to ascertain. There does seem to be a general trend toward an in increase in anti-immigrant sentiment in the 2010s compare to the 2000s (or even overall if you plot a straight line); I haven't done any formal testing of this 2000-2010 hypothesis; the conclusion seems sensitive the two low-scoring surveys from the 2000s, but the odd spike in between them makes me skeptical that it is a sizeable real effect. The general trend of a slight increase is less sensitive to removing those two surveys, but the "yes" line is nearly flat; see below 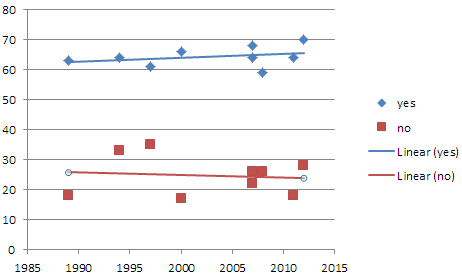 These surveys didn't all have the same methodology; some were phone, some face-to-face, and some by self-completed questionnaires. With such heterogeneity, more data points would be needed for anything but a wild guess in terms of conclusions.

There are several reasons. One of the simplest is geography: the mainland UK is an island and only Northern Ireland shares a land border with another state. In other European countries people are used to being able to walk or drive into neighbouring countries with no barriers, as well as work there. It's actually fairly common for people to work in a different country to the one they live in, especially around the Netherlands/Belgium/Germany/France border area.

Another reason is that immigrants have been the target of xenophobic hatred from parts of the British media for decades. In fact there is a very long history of this, for example with Jewish immigrants being described as "vermin" and accused of spreading disease back in the early 1900s. More recently immigrants have been blamed for economic problems such as low wages, and described as "flooding" the country or with similarly irresponsible language.

Some politicians, such as Theresa May, are guilty of this too. She described EU citizens exercising freedom of movement as "queue jumpers" quite recently.

The EU also has more of a voice in many other European countries. It's more common to see EU flags and signs with information on how the EU was involved with various projects. People are generally more aware of how interdependent EU countries are, and feel closer to the EU itself as an institution. For example, many in the UK believe that the EU is "undemocratic" and that EU MEPs and leaders are not elected, when in fact it actually compares quite favourably with their own parliamentary system.

Not the answer you're looking for? Browse other questions tagged united-kingdom european-union immigration polling freedom-of-movement .

27
Why do other countries in the EU care so strongly that the UK accepts free movement of people?
8
How many people were barred from participating in the 2016 EU referendum because they lived outside the UK?
6
What is the opinion of people of Japan about Article (9)?
23
What do British people think about female-only carriages on trains?
8
Can a EU member merge with a non-EU one without previously setting up/changing some agreements at EU level?
20
Why do some people in the British Parliament stand during the Prime Minister's Questions session?
8
Are there precedents for the EU fining the UK for undervalued Chinese imports?
9
What do recent polls show the British people want from Brexit?
1
How does the opposition to quotas for refugees policies from certain EU countries coexist with the EU “free movement of people inside EU” policies?