Where can I find a scatter plot of welfare spending vs. immigrant rate?

Where can I find a scatter plot of welfare spending (per capita, % of spending, or % of GDP) vs. immigrant rate (per capita, or % of population)? By state or by country would be fine. I tried to search, but came up empty:

If you're looking into the "welfare magnet hypothesis", there are plenty of papers, e.g. this has a reasonably close plot what you ask for: 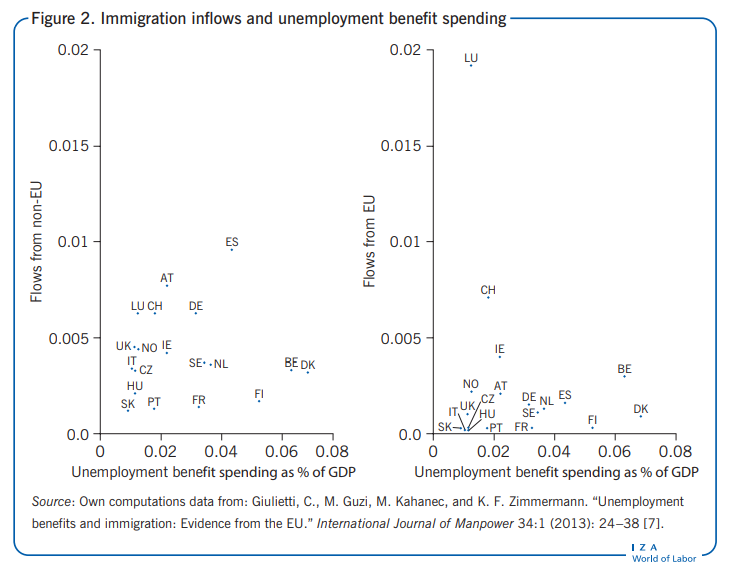 An essentially null effect also emerges when looking at spending on unemployment benefits as a percentage of GDP [7]. Data from 19 EU countries for the period 1998–2008 show a small positive association between spending on unemployment benefits and immigration flows for immigrants from non-EU origins (see Figure 2). But the effect was essentially zero after taking into account that immigration itself affects the level of public expenditure. Factors such as income, unemployment rates, and the presence of previous immigrants in the receiving country were instead the major determinants of immigration flows.

Here is a more complete answer which includes all types of welfare, not just unemployment benefits, and 50 data points, not just a dozen. It also has a trend line which shows no correlation. 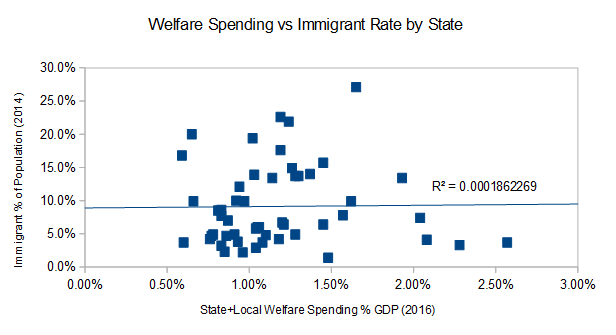 Not the answer you're looking for? Browse other questions tagged economy immigration social-welfare welfare .

24
Do immigrants to the US use up more welfare?

14
Do new jobs always contribute to the welfare of a country?
19
Why did local authorities in England and Wales stop building homes?
8
What is Sweden's historical violent crime rate vs. immigration rate?
2
US political parties that support EU style social social welfare spending?
6
Why do politicians care so much about economic growth? Or: Why did the US need a tax reform?
24
Do immigrants to the US use up more welfare?
21
Do any nations have in place formal mechanisms to "save in good years/spend in bad years"?
14
Does anyone gather data on countries by *median* GDP/capita?