Did IMF grant a loan with no (reform) conditions to Romania in 2009?

I've been looking at some of the more recent IMF loans and the Wikipedia description of the one given to Romania appears to imply no reform conditions were attached to the loan:

While in January 2009, President Traian Băsescu said that the last thing Romania would do would be to sign an agreement with the IMF, his tone softened to agree an IMF monitorization (but without any conditions put on by the IMF) and eventually, Prime Minister Emil Boc signed the new agreement in June 2009, Boc arguing that the loan will be taken exclusively by the National Bank of Romania to consolidate its reserves.

The IMF and EU agreement gave Romania a 20 billion € line of credit of which the National Bank of Romania and the Romanian government took 17.9 billion € and which should be gradually returned by 2023, giving a total average interest of 15% (2.74 billion €).

So other than a non-trivial interest rate, that suggests there were no other structural/reform conditions which the IMF usually attaches to such loans. I've also read the IMF's press release on the 2009 loan to Romania, and I see no obvious mention of conditionality either. So, is it really the case that there were no reform conditions attached? (Romania was indeed already a EU member in 2009, but then so was Greece and the IMF surely was not (and still isn't) short of demanding structural reforms in the latter country...). And if the answer is a trivial "yes" in the case of Romania, were there similar no-condition loans given by the IMF to other countries in the immediate aftermath of the 2008 financial crisis? Or is Romania's case somewhat unique?

Apparently the answer is "no". There's a database with conditions attached to loans, and the 2009 Standby Agreement (SBA) with Romania had plenty of those, including pension (legislation) reform, reform of Romania's central tax collection agency (ANAF); these were present since the original May 2009 agreement. There were also some very specific conditions like "Eliminate by government ordinance the legal basis of stimulente funds, effective January 1, 2012" (I have no idea exactly what that refers to; that one was added in March 2011, so apparently the SBA was updated then with new conditions.) The entries in this database have some paragraph/article references that probably relate to text of the SBA, which I wasn't able to find just yet.

Actually the IMF has its own ex-post assessment of the (2011) conditionality, which goes like:

Overall, program conditionality was less streamlined than in previous programs and increased over time, notably in the area of structural reforms

And it comes with this comparative graph, in which the 2009 SBA is also plotted, so it definitely wasn't free of conditionality, even if they didn't outline it in their press release: 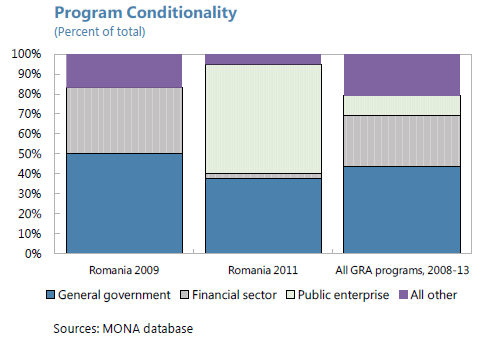 And the ex-post of the 2013 Romania SBA has an even more interesting graph; Romania (despite the 2009's government/president discourse) eventually accepted even more structural conditions than Greece (which isn't to say that they were necessarily comparable in intensity): 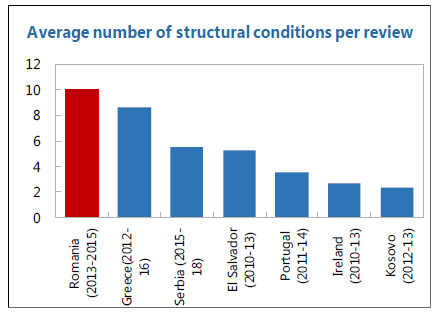 I guess there's a substantial lack of manpower in updating Wikipedia.

Not the answer you're looking for? Browse other questions tagged economy romania financial-crisis international-monetary-fund .

13
Why did the presidents of US and Romania contradict each other about the Visa Waiver Program?
6
Why do politicians care so much about economic growth? Or: Why did the US need a tax reform?
23
Did Germany profit from the (third) Greek bailout?
8
Why does the IMF insist on maintaining the privatization of state entities as a reform policy as a prerequisite for borrowing states?
6
Are the other countries besides Romania that automatically reduce prison sentences for bad prison conditions?
3
Did the Romanian president equate autonomy for the Székely with giving the area to Hungary in prior speeches?
0
Why does the IMF set its development models and economic policies behind closed doors?