Is there a ranking of states population density based on usable land area?

Population density statistics can often be misleading. For example the Netherlands are considered to be one of the world's densest countries, but the explanation is that essentially 100% (and even more, if you count man made land extensions) is usable for building cities. On other hand of the spectrum, China is moderately dense but a significant chunk of their territory is covered by deserts and mountain ranges.

Is there a rating of population densities that takes these factors into account?

It's difficult to find a population density measure with the criteria you've requested because the very definition of land usable for urban development is hard to define. Today we do have massive urban development in areas considered prohibitive less than 100 years ago. Also the floor-area ratio is quite different depending on culture.

Nevertheless you do have a physiological density, also known as real population density (as opposed to arithmetic density) , whose definition is the following:

The physiological density or real population density is the number of people per unit area of arable land.

This is a map of the physiological density in the world: 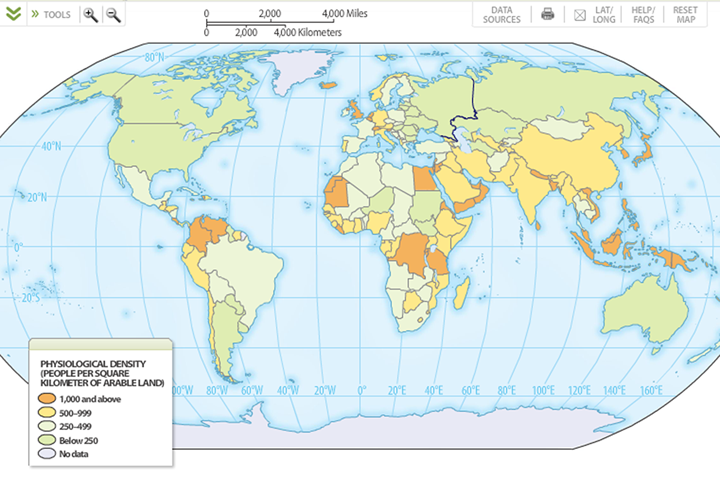 Wikipedia has a list for physiological density. The World Bank keeps the data of arable land per person.

Not the answer you're looking for? Browse other questions tagged statistics .