What is the latest scholarship (2018) on the relationship between legitimacy and repression?

Therefore: "what is the latest scholarship that discusses the relationship between the legitimacy of the government and the need for repression?"

I am specifically interested in empirical studies, not theoretical ones, regardless of methodology. Therefore discussions of the definition or the reasons why a government might appear legitimate does not meet the question, but relationships of measures of legitimacy with rates or patterns of repression in a certain state or set of states would.

The very definition of legitimacy is a contentious subject (Lee, 2012). There are recent studies regarding legitimacy in a more modern context (a more globalized world) and to consider the differences between domestic and international law but the authors often comment on the difficulty of the task (Adams, 2017).

As standardly conceived, legitimacy is the right to rule: a legitimate state has the right to rule and an illegitimate state does not. The nature of this right is widely contested, variously taking the form of a claim‐right, a power‐right, or a liberty‐right. Theorists disagree about what sort of standing legitimacy constitutes (for example, claim, power, or liberty) as well as what sort of “uptake” legitimacy demands of others (for example, a duty of obedience or deference, a liability, or the lack of a claim). Despite these differences, theorists following the traditional approach all focus on ruling because their object of analysis is the state. Whatever else it does, the state issues rules in the form of laws and coercively enforces those rules. The question of whether the state is legitimate becomes the question of whether it has the standing to issue and enforce rules in the ways that it does.

I think the best option you have to obtain very recent empirical data is to directly interpret the information produced by organizations that deal on the subject. One such case is the Fund for Peace particularly their Fragile States Index. For example here is the index for 2017: 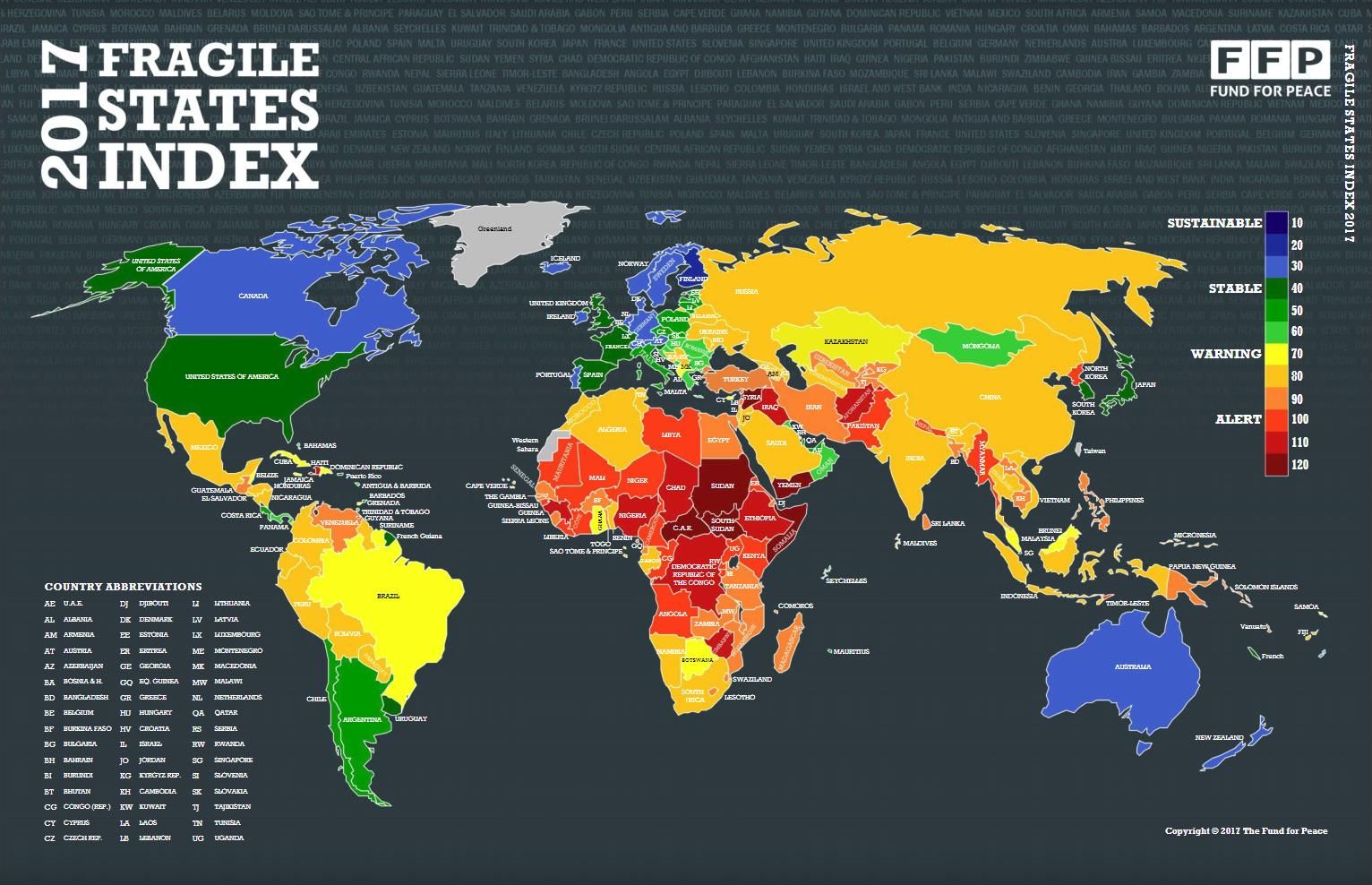 The index is well known. Less known, however, is that there are several indicators that are used to calculate it (check their report for complete definitions). One of them is P1: State Legitimacy:

The State Legitimacy Indicator considers the representativeness and openness of government and its relationship with its citizenry. The Indicator looks at the population’s level of confidence in state institutions and processes, and assesses the effects where that confidence is absent, manifested through mass public demonstrations, sustained civil disobedience, or the rise of armed insurgencies. Though the State Legitimacy indicator does not necessarily make a judgment on democratic governance, it does consider the integrity of elections where they take place (such as flawed or boycotted elections), the nature of political transitions, and where there is an absence of democratic elections, the degree to which the government is representative of the population of which it governs.

And another is C1: Security Apparatus:

The Security Apparatus indicator considers the security threats to a state, such as bombings, attacks and battle-related deaths, rebel movements, mutinies, coups, or terrorism. The Security Apparatus also takes into account serious criminal factors, such as organized crime and homicides, and perceived trust of citizens in domestic security. In some instances, the security apparatus may extend beyond traditional military or police forces to include state-sponsored or state-supported private militias that terrorize political opponents, suspected “enemies,” or civilians seen to be sympathetic to the opposition. In other instances, the security apparatus of a state can include a “deep state”, that may consist of secret intelligence units, or other irregular security forces, that serve the interests of a political leader or clique. As a counter example, the indicator will also take into account armed resistance to a governing authority, particularly the manifestation of violent uprisings and insurgencies, proliferation of independent militias, vigilantes, or mercenary groups that challenge the state’s monopoly of the use of force.

Others that seemed to me important for your question of empirical evidence are the C3:Group Grievance and P3:Human Rights and the rule of law.

They also provide the data freely in Excel format (here). By downloading the data and plotting these indicators you'll see a strong linear multivariate relation between the four indicators: 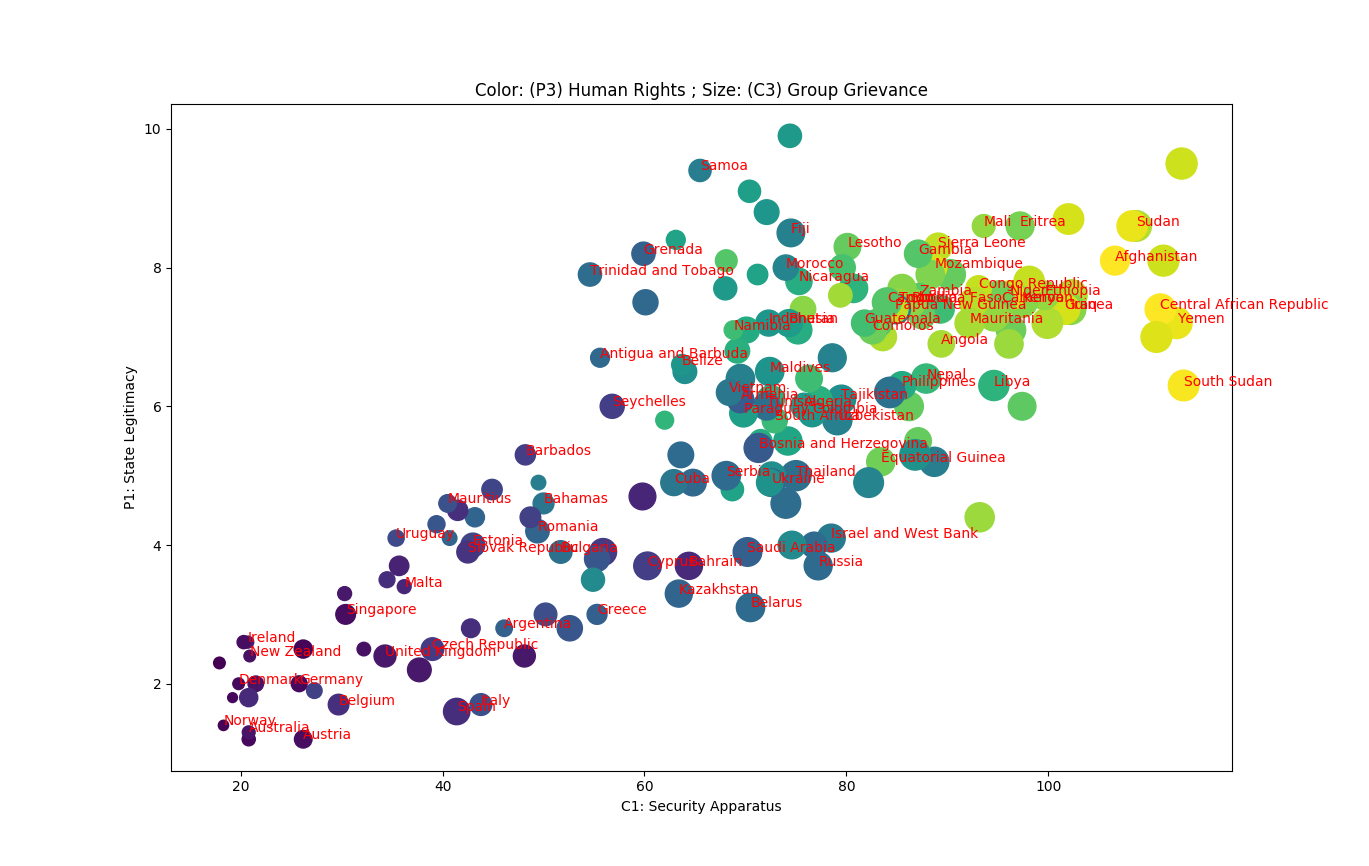 The main indicator are spatial. The color is for Human Rights, and the size for Group Grievance.

The plot was built with 2018 data using Python/matplotlib. I understand you are probably looking for peer-reviewed academic studies but while none is found, perhaps this will help put the subject into better context.

Not the answer you're looking for? Browse other questions tagged government reference-request .