What's the extent of Russian involvement in Brexit, according to latest research?

I found a Channel 4 piece from November last year, discussing 3 papers, roughly in the order of the quantity of evidence (which however might be inversely correlated with the certainty that they were an organized effort--a fair point raised in a comment below):

This week, further research into Twitter bots and the Brexit vote was published by the Oxford Internet Institute. It looked at 22.6 million tweets and cross-referred them with 2,752 accounts that the US Senate has identified as creations of the Russian Internet Research Agency.

Researcher Yin Yin Lu told Sky News that she had found 416 tweets from the Russian accounts from March to July 2016 (i.e. the months preceding the EU referendum).

She was careful to point out that ŌĆ£the number of these tweets is important to highlight. So thereŌĆÖs about 400 tweets here out of 22.6 million. That is a very infinitesimal fraction. So the word ŌĆśinterferenceŌĆÖ is perhaps a bit exaggeratedŌĆØ.

Although she did say that the tweets did appear to be coordinated ŌĆō with accounts apparently retweeting and sharing each otherŌĆÖs content. She said ŌĆ£thereŌĆÖs some kind of network happening hereŌĆØ.

A second report ŌĆō this time from the University of Edinburgh ŌĆō found a higher number of tweets about Brexit from the Russian Internet Research Agency. The Guardian reports that researchers identified 419 accounts operating from the Agency that were attempting to influence UK politics. The accounts were on the list of 2,752 accounts suspended by Twitter in the US.

Professor Laura Cram, who led the research, told the Guardian that those 419 accounts tweeted about Brexit at total of 3,468 times ŌĆō mostly after the referendum had taken place.

Separately, an upcoming paper from researchers at the University of California, Berkeley, and Swansea University is set to reveal an even wider network of pro-Brexit Russian bots.

The research ŌĆō which has been seen by the Times newspaper ŌĆō tracked over 150,000 Russian accounts that used the hashtag ŌĆ£BrexitŌĆØ, most of which were advocating BritainŌĆÖs departure from the EU.

One account, ŌĆ£Svetal1972ŌĆØ, posted 92 tweets between 20 and 24 June, including one that called for Britain to ŌĆ£make June the 23rd our Independence DayŌĆØ.

So thereŌĆÖs some evidence of Russian involvement in spreading pro-Leave sentiment online ŌĆō although nothing as yet that suggests interference on the same scale as is alleged in the US.

The article then goes on to dissect what might have been the Russia's reasons for trying to influence Brexit.

What I want to ask here: has there been more evidence of Russian involvement in Brexit since that article was published?

Interestingly, the authors of the 2nd paper, Cram et al., have a shorter follow-up paper published in June this year. They have not expanded the pool of accounts investigated, i.e. their new paper is still about the 2,752 accounts suspended by Twitter in the US (and for which there is an off-line archive). But Cram et al. have an interesting conclusion about what these particular accounts looked like:

These accounts are not created to look like grassroots brexit leavers or remainers but they look like conservative Americans or Germans. Our overall summary of this data is that these trolls used Brexit to promote an agenda in the US and Germany. There may be other accounts with Brexit grassroot sock-puppets but these were USA and German sock-puppet IRA controlled accounts which were occasionally used to tweet about Brexit, particularly on the day of the referendum.

IRA here refers to the [Russian] Internet Research Agency. And from the above it also looks like Germany needs to get more worried.

I'm also gonna post here my summary of the 3rd paper (final version of which was published in May 2018), because I found no good summary of it in any newspaper. Basically this long paper does one thing: estimates the influence that Twitter "bots" had on "human" accounts, using millions of Twitter messages as data. I put both humans and bots in quotes (as the authors do in some parts of their paper) because they use (previously published and reasonably well accepted) heuristics to obtain a classification. There's no attempt to figure out who's behind accounts beyond that. The climax of this paper is to compute a counterfactual effect, i.e. what would have happened if bots didn't post, and the to infer from this how much the actual vote was affected by bots (using a correlation between tweets and votes).

Panels D-F replicate the analysis for the 2016 U.S. Presidential Election sample. [...] the observed difference between actual and counterfactual pro-Trump tweet shares suggests that 3.23 percentage points of the actual vote could be rationalized with the influence of bots. 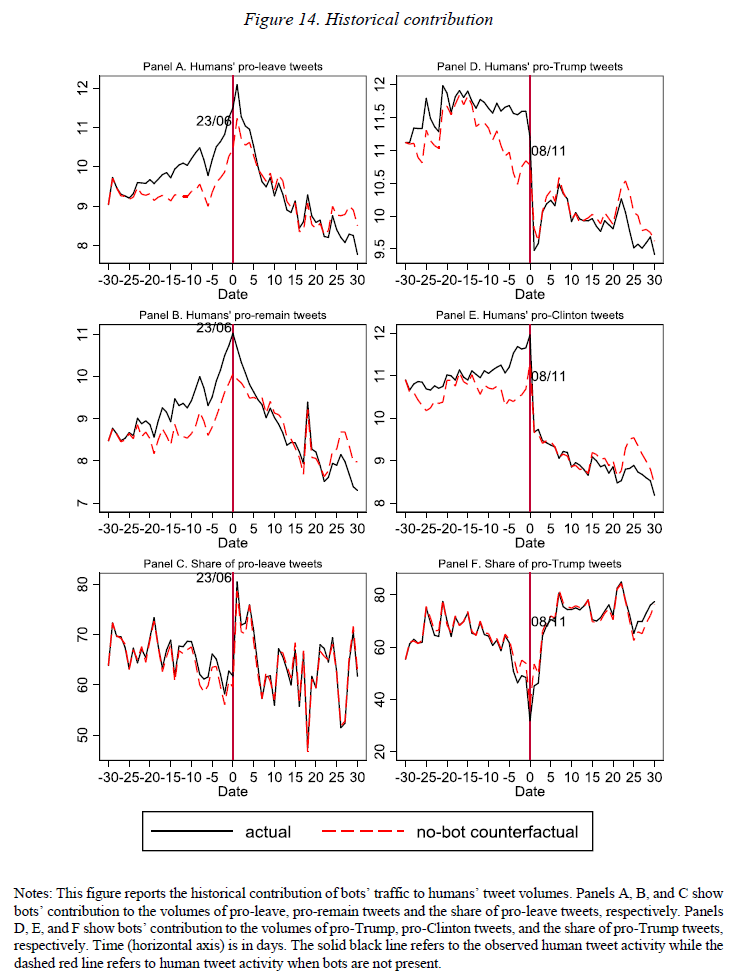 So this is an aggregate analysis of bot effects, without trying to pinpoint to whom the bots belonged to, although "Svetal1972" (singled out in a newspaper, but not mentioned in the actual paper) does sound a bit Russian...

A report compiled for the US Senate, titled "PutinŌĆÖs asymmetric assault on democracy in Russia and Europe: implications for US national security", pinpoints the way in which UK campaign finance laws do not require disclosure of political donations if they are from ŌĆ£the beneficial owners of non-British companies that are incorporated in the EU and carry out business in the UKŌĆØ.

The report adds that although officially the Russian government asserted its neutrality on Brexit, its English-language media outlets RT and Sputnik covered the referendum campaign extensively and offered "systematically one-sided coverage".

Research by Swansea University and UC Berkley concludes that while Russian efforts on Twitter may have had a marginal effect, given how close the vote was that could have been significant.

ŌĆ£Our results suggest that, given narrow margins of victories in each vote, botsŌĆÖ effect was likely marginal but possibly large enough to affect the outcomes.ŌĆØ

Not the answer you're looking for? Browse other questions tagged united-kingdom european-union russian-federation brexit .

14
Brexit: leaving Customs Union and/or Single Market -- what do these things really mean?
1
What's a "Minister for Brexit"?
8
What's the point in holding a second Brexit referendum?
1
Did the EU agree to a customs union without freedom of movement in the latest Brexit deal?
6
Is there any research on when voters made their mind up in the Brexit referendum campaign?
20
Did Mueller's report provide new evidence for Russian govt interference in 2016 elections?
20
If the UK government doesn't ask for article 50 extension, can parliament do it instead?
12
Why is the Common Agricultural Policy unfavourable to the UK?
10
To what extent are financial services in this last Brexit deal (trade agreement)?