What are the main differences between UK and US (NEP) exit polls, methodologically?

The UK since 2001-2005 has apparently managed to get extremely accurate exit-polls: 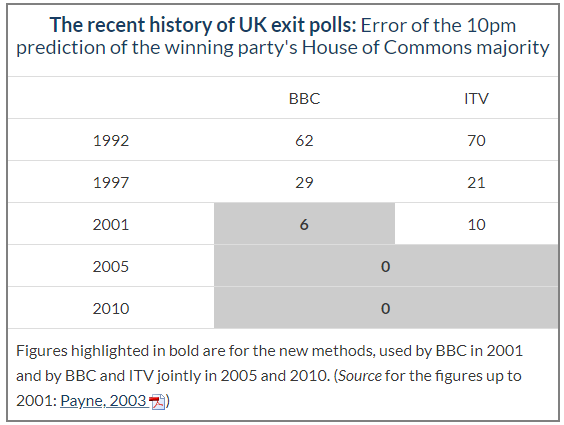 And it doesn't look like simply a matter of well-gerrymandered seats; the page only give data for 2005 percentage-wise, but it does look impressive

In contrast the US exit polling is still very troubled by the "red shift" (i.e. failure to predict Republicans winning, when they do), so troubled that it led to a partial dissolution of the their National Election Pool (NEP):

The Associated Press confirmed Friday it has joined Fox News in abandoning the so-called National Election Pool — the election surveying instrument that the news media, campaign operatives and political junkies have come to love and hate — marking the end of an era when one ubiquitous Election Day survey shaped the understanding of presidential and state election outcomes.

[...] the early exit-poll results proved misleading in the 2016 presidential election. [...] The early exit polls were similarly off in 2004 — in the same direction. Exit polls showed John Kerry ahead of then-President George W. Bush in a number of key states.

Fox News cited this when it announced it was leaving the pool earlier this year. “We’ve had concerns with Election Day exit polling for many years, and this year once again proved that they are problematic,” Jay Wallace, Fox’s executive vice president of news, said back in April.

From a non-technical article on one of the architects of the UK exit-polling system:

The secret, he says, is measuring change. He goes to the same polling stations sampled in the previous election and measures the change in party support between the two exit polls, modelling this according to likely variables – the Conservatives were likely to do better in places where Ukip had done well previously, for example, and Labour in places with more graduates – eventually producing a set of equations for all the constituencies in England, Scotland and Wales. The final poll is based on a sum of probabilities across all parties of their chances of winning.

Is this the secret sauce missing the US exit polls, "measuring change"? I noted for instance that there has been no exit polling for the Brexit referendum, because there was no baseline to measure change from.

There's an academic-ish article on the 2017 UK poll as well. One interesting factoid:

The exit poll interview has just one question: for whom had the respondents just voted? They report this by filling in a mock ballot paper, unseen by the interviewers, and dropping it into a mock ballot box.

I guess this is intended to avoid any "shy factor". I haven't heard of this being done in the US, by the way, although evidence for this kind of effect skewing the exit polls in the US is apparently weak.

Also this paper gives the 2017 results which are not spotless (prediction-wise), but still pretty good:

American and UK exit polls are very different beasts, and not really comparable.

In the UK, all polling is hand-counted, all polling stations close at the same time (10 pm) and no constituency reports partial results. This means that the TV networks have to fill several hours of air time with punditry! To this end, they commission an exit poll that is intended to achieve one thing: Predict the winner and give the pundits something to talk about.

In the USA, the East coast states have closed their poll booths and hit the count button on their voting machines while the people in the west are still voting. Some precincts are allowed to close early (and there are a couple that close at 12:05 AM Eastern time just to be the first to report). This means that all day there is data coming in for the pundits to cogitate over. A UK style exit poll would be too late for the pundits. Instead, US exit polls are about getting detailed sociological data about voters: age, race, values, status, and so on. The results of the exit polls are considered in the weeks and months after the result in an attempt to understand why the outcome was as it was.

So although they are both called "exit polls", they are really not the same at all. One is about predicting a winner, the other is about analysis after the fact. If the US pollsters wanted a "we predict the winner" poll, they could run one, and the method of measuring change with a faux secret ballot has been shown to be very effective in the UK. But this is not what US exit polls are for.

5
Are there any methods that compensate for phenomenons such as Shy Tory factor and Bradley effect?
8
Why did Labour support the snap election?
4
Why are (public) political polls typically allowed even very close to the elections despite of their apparent disruptive effect on voters perception?
9
How does the discrepancy between exit polls and results in recent US elections compare to pre-electronic machine margins?
3
How did Labour party members in England vote in the 2016 Brexit referendum?
5
How does Indonesia's unofficial presidential election tally finish with "head-snapping" speed?
5
What is an MRP poll, and is it more accurate than a conventional poll?
7
How do US pollsters select people for their polls?
3
What, if anything, has been done to account for mail-in votes in 2020 exit poll data?
2
According to political scientists, what, if anything, are the benefits of election polling to a liberal democracy?