Russia has a population comparable to Japan. But, the size of its GDP is below South Korea.

What factors prevented Russia from becoming an economic giant?

One thesis, advanced by Harley Balzer that it comes down to Russia having been less open to trade and decentralization. He has a 30-something pages long paper draft arguing this point, e.g. "Russian policy has discouraged rather than stimulated local initiative"; there are no border regions in Russia with growth far outrsripping the rest of the country, like in China. Furthermore there is poorer internal trade in Russia. Some of this is however due to the nature of Russia's economy: "Exporting natural resources does not foster dense economic ties". China was also better at foreign trade deals according to Balzer. Russia joined the WTO in 2012; China back in 2001.

Off the top of my head, there were probably other reasons why Russia couldn't hope to take China's place: lower population (somewhere around 1/9 of China today) and higher average salary probably would have prevented Russia from becoming factory central for the world even if its policies had been less hamstringing. Not only was the population smaller, but much less of it was employed in agriculture in Russia compared to China (about 15% in Russia vs 53% in China in the mid-1990s), so there wasn't really much of a perspective in Russia of luring masses of peasants to (newly established) cheap sneaker factories [and similar low-tech industries] which have become pretty unprofitable in China nowadays as well, after salaries rose.)

Also, there was probably more reluctance from foreigners to invest in Russia than in China because the potential market was smaller etc. The actual foreign investment numbers support this view (even per capita, although the latter gap was much less drastic):

Another factor pointed out in a (fairly dated now) comparison was presumably the presence of Taiwan and Hong Kong inverstors:

Besides lacking a surplus pool of agricultural labor, Russia’s incipient private sector suffered from a second disadvantage relative to China. New firms are risky, and it can therefore be difficult for them to raise capital. Chinese firms had a tremendous advantage in this regard due to the presence of an overseas network of successful Chinese entrepreneurs, particularly in Hong Kong and Taiwan. These individuals had the resources and the desire to establish a beachhead in the homeland. As soon as China removed restrictions on foreign direct investment, this money came pouring in. Russia, on the other hand, had to go begging to the IMF.

I haven't seen any figures of the Taiwanese and Hong Kong FDIs, so I'm having reservations that the effect was this significant on an economy of China's scale. They might have had more the effect of a path opener, showing other, bigger investors that it was reasonably safe to invest in China.

More recently however, a clear factor was that the Kremlin definitely engaged in too many military adventures. Sure China flexes its muscles in the South China Sea, or with Taiwan occasionally, but this pales in comparison to what Putin din in Georgia, Crimea, Ukraine etc. Some sanctions as a result, soon followed by junk bond status and other perceptions of a high-risk country. To be fair however, this was not the only factor. Depence on energy exports and sanction hit Russia as a double whammy after the financial crisis:

Yearly average growth [of Russia] between 2000 and 2008 was 6.9 percent, a growth rate only challenged by China (10.4 percent) and India (6.7 percent) among the developing and emerging economies (IMF, 2014, Kudrin, Gurvich, 2015). During the later period, 2009–2013, including the financial crisis, Russia's average growth was 1 percent, those of China and India 8.9 and 7.0 percent respectively (IMF 2014). The high growth rate in the first period was due to the economic reforms in the 1990s that led to structural change, productivity increases, integration with Europe and the rise in the oil price from an average of USD 19.60/bbl in the 1990s to almost USD 150/bbl before the dip in 2008. After that oil prices increased again, but growth did not pick up as expected after 2009–2010; instead it declined gradually.

As a final note, Russia is still ahead of China in GDP per capita (approximately $10,000 vs $8,000) as well as in terms of GDP adjusted for purchasing power parity (PPP); the gap is bigger for the latter, about $27,000 vs $17,000. The following graph of (nominal) GDP per capita over time, although a bit stylized, is also indicative of what happened: 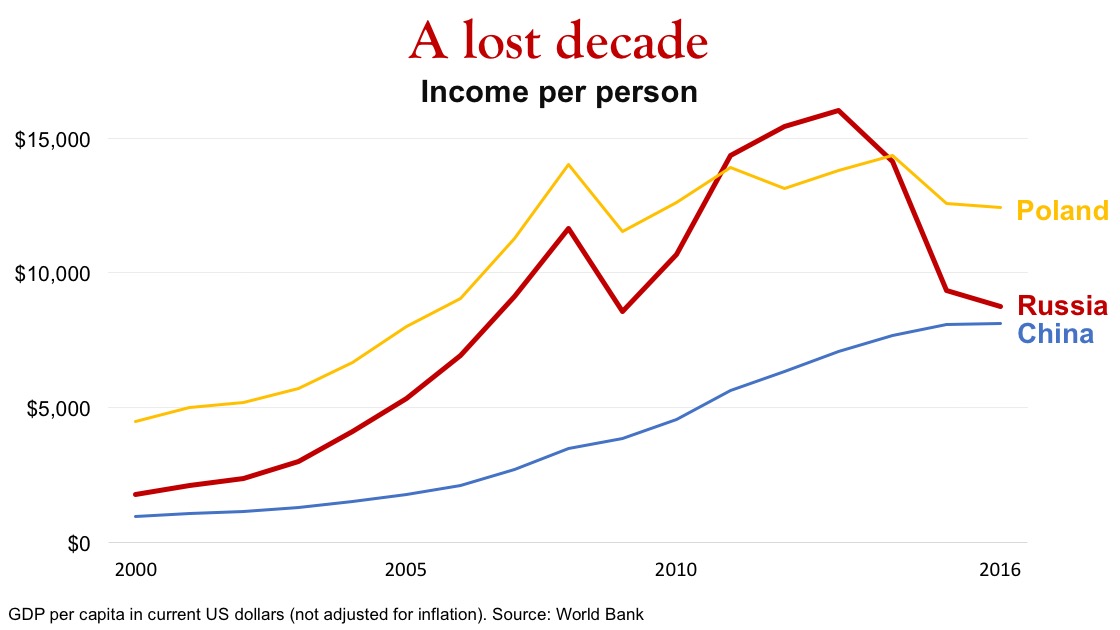 After the dissolution of the Soviet Union there was an effort to privatize the Russian economy. As opposed to the open sale of state assets, which was shot down due to fears that this would further concentrate ownership among the Russian mafia and the Nomenklatura, the government of Russia decided to pursue a voucher system, which had seen relative success in the privatization of Czechoslovakia. (source) This backfired as outlined below, and this is how the oligarchs came into power, which has been arguably the biggest draw on growth of the Russian economy

Wikipedia has a succinct outline of what the voucher system is as well as how and why it went awry:

The vouchers, each corresponding to a share in the national wealth, were distributed equally among the population, including minors. They could be exchanged for shares in the enterprises to be privatized. Because most people were not well-informed about the nature of the program or were very poor, they were quick to sell their vouchers for money, unprepared or unwilling to invest.[citation needed] Most vouchers—and, hence, most shares—wound up being acquired by the management of the enterprises.

This lack of diversification and power of oligarchs are intrinsically intertwined, as outlined in rs.29's answer

After the Soviet Union collapsed, Russian resources were plundered by oligarchs not much interested in Russia's future, only in their personal wealth...China on the other hand was and is in the hands of CPC, arguably having stability and predictability. Also, CPC unlike oligarchs has interest to make China stronger. As a result, in Russian lost decade (1990-2000) China has grown it's industrial sector, while Russia remained stuck into raw materials export, because that made quick buck for aforementioned oligarchs.

RedGrittyBrick's answer does a good job summarizing how corruption has crippled Russian growth. This is not to say that there isn't pervasive corruption in the Chinese system, but the results are more extreme.

China simply has way more people who worked at lower wages than Russians, which makes it easier to get a foothold in any industry that requires cheap labor.

The thing that has always struck me as the crucial difference between Russia and China is the fact that Russia seemed to jump, almost naively, out into a sort of free-market capitalism without any transition, whereas in China, the Communist Party have maintained strong control, while moving gradually towards a market economy, thereby avoiding the power vacuum and chaos that plagued Russia, at least for a while.

I think also that we, in the West have had a somewhat naive notion, that 'democracy' and 'freedom' will set everything right, just like that, without realising, that those terms don't necessarily mean the same in all cultures, and that these are in fact ideals we, in our culture, have had to learn over quite a long historical period of wrangling; IOW, they aren't really universal, natural concepts.

Since all previous sources of growth – cheap labour, growing commodity prices, expansion of consumer credit – have already been exhausted, further growth would require incentives for investment. But that requires protection of property rights and enforcement of contracts – exactly what corruption in government and the judiciary undermines.

On the Corruption Perceptions Index, Russia ranks 131 with a corruption index of 29. China ranks 79 with an index of 40 (much better, though still pretty bad).

The BBC says in Russia's growth stifled by corruption

Transparency International, which ranks countries according to perceived levels of corruption, says Russia has slumped from 46th place in 1996 to 143rd in 2011 .

40
Why does PRC devalue its currency on purpose, but Turkey is worried about the devaluation of its currency?

12
Why did Russia default on its domestic bonds in 1998 when it could simply print money?
4
Did Reagan use public spending to make the GDP grow?
0
Which position in Russia is more powerful in the field of economy?
23
Why would NATO not defend its members against Russia?
21
Did Ukraine lose half its GDP because of sanctions against Russia?
2
Can't a country grow its GDP without foreign investment?
0
Where does China buy its hi-tech weapons from other than Russia?
1
Why have China and Russia gone down different paths?