Has there been a (sustained) downward trend in the amount of EU Commission's press releases in the past decade?

Wikipedia seems to suggest so

Where there are multiple departments involved a press release can also be a source of competition between areas of the Commission and Commissioners themselves. This also leads to an unusually high number of press releases, 1907 for 2006, and is seen as a unique product of the EU's political set-up.[76] The number of Commission press releases shows a decreasing trend. 1768 press releases were published in 2010 and 1589 in 2011.[79]

But it only has data for 3 years, and ends in 2011. Has the trend continued? And if there is a trend, have there been any published analyses/hypotheses as to the purported reason for it?

Using the same source the writer(s) of the Wikipedia article did (EU Commission Press Release Database) you'll notice that it wasn't only the Press Releases, all documents in general show a decreasing trend particularly from 2013 forward: 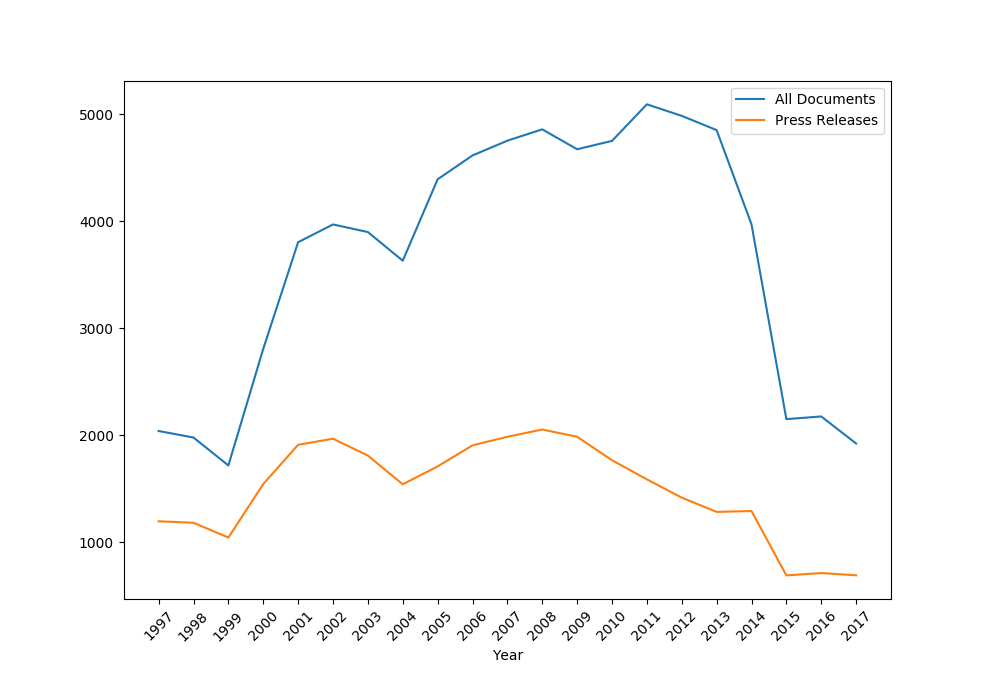 The source for your quoted text conclusion is Maria Lindholm and its study is from 2008, too old to answer the sharp decrease of 2013. Probably a much better explanation is some of the cuts that were made during the recession, for example by closing Presseurop.

Not the answer you're looking for? Browse other questions tagged european-union public-relations .

3
Have there been any occurrences of a country automatically joining the European Union after unification/reunification (or tried to)?
8
Has there been any EU reaction to Trump's threat to put a 25% tariff on all EU cars?
113
What are the main reasons for why negotiating a proper Brexit deal has been so hard?
11
Has there been a decline in EU-skepticism since Brexit?
5
Has there been any research into whether euroscepticism is a function of age or of values?
6
Have the EU countries been diverging economically for the past two decades, despite rules convergence?
3
What legal recourse is available in the EU if it turns out that Greece has been doing “illegal pushbacks” of asylum seekers?
22
What has the reaction from the EU been to Trump suspending travel from the whole 26-country Schengen zone?
4
How effective has the sanction on selling of arms to China been?