Are there statistics on the origin and length of stay of non-EU foreign workers in the EU?

But Wikipedia doesn't break down where these workers were from (e.g. Middle East, non-EU Europe, former colonies etc.) Are there there some charts/breakdowns on the citizenship of the non-EU foreign workers working in the EU? Also, are there stats on their length of stay (e.g. average/median or even max)?

It looks like most new work permits were held by Ukrainians in 2016 (the last year I could find stats for). It's not easy to figure out any more detailed stats because Eurostat only gives a breakdown by country of origin for the total number of new permits (regardless of reason for the permit). But for Ukraine, it's somewhat easy because it leads on total number and on the ratio of work to other permits. More precisely, in 2016 there were 589K new permits to Ukrainians, and 82.7% were for work, so that gives about 487K new work permits issued to Ukrainians... but these were not all granted in 2016; the increase between 2015 and 2016 in the total number of new permits for Ukrainians was only 89K... yeah Eurostat data is really confusing on this. For re-issued permits... I don't know at all.

Actually, they do have breakdown (but only in a table, not in text):

That confirms my calculation for Ukraine. And we also find out that most of these Ukrainians (95% of them) went to work in Poland.

Also, second place for work permits went to India... wth 57K work permits, and the majority of these (53%) went to work in the UK... with rest much more thinly spread; Germany was the second destination for these Indians, but only took 8% of them.

Third place goes to the U.S. with nearly as many permits as for India, and a similar spread: 62% in the UK, followed by 10% who went to Germany.

Very, very partial answer. I found stats for the origin of Blue Card holders for one year (2015). These are very probably not representative for other national-level schemes because they are seriously biased by Germany having issued most of these Blue Cards (for high-skilled workers), while in national-level schemes Poland and the UK both outweigh Germany; in 2015 there were 541,583 first-residence permits issued for work reasons in Poland vs 194,813 such permits in Germany, whereas for Blue Cards in the same year Poland issued 369 vs Germany's 14,620. Also the UK issued 633,017 such national-level permits in 2015, but doesn't even take part in the Blue Card scheme. With that big disclaimer, here is breakdown: 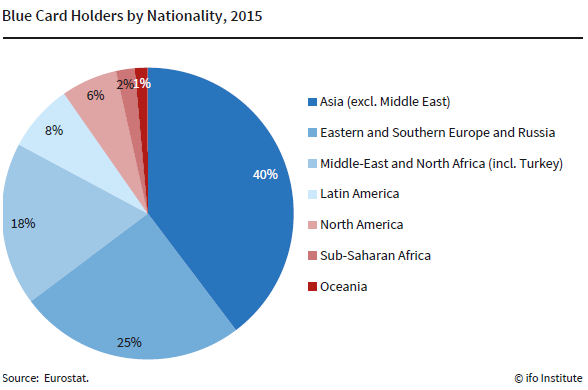 So most (40%) were granted to applicants from Asia (excluding the middle East), then come non-EU European countries from the South-East (25%), followed by the Middle-East (incl. Turkey and North-Africa) with 18% and then the Americas (14%): 8% South, 6% North. Tailing were Sub-saharan africa with 2% and Oceania with 1%.

Not the answer you're looking for? Browse other questions tagged european-union international employment .

1
Why are there so many woman leaders in South Asian countries while there are none in the US?
12
Why are Romania's and Bulgaria's reasons for postponing entering the Schengen area considered non-technical?
11
Are there EU countries that offer a path to citizenship for non-EU foreign workers?
5
How many "Blue Cards" have EU countries issued?
6
Is there a correlation between size of member state and support for EU membership?
2
Are there restrictions on how recipient countries can use foreign aid money coming from the U.S.?
2
Are there any laws that would oblige the EU to assist an EU-member that is attacked by a non-member
8
What are the common features of pro-union and anti-union laws?