How many "Blue Cards" have EU countries issued?

The "Blue Card" is EU-level scheme

allowing high-skilled non-EU citizens to work and live in any country within the European Union, excluding Denmark, Ireland and the United Kingdom,

According to a 2016 EU press release it didn't work too well, so it was reformed then:

The EU Blue Card scheme, adopted in 2009, has proven insufficient and unattractive so far and is therefore underused. Restrictive admission conditions and the existence of parallel rules, conditions and procedures at national level have limited the use of the EU scheme. Only 31% of highly-educated migrants to OECD countries chose the EU as a destination, meaning skilled workers are choosing other destinations which compete economically with the EU.

But neither source gives any actual numbers for how many of these Blue Cards have been issued (either before or after the reform). So are there any yearly stats of how many such cards have been granted? (It would be even better if the stats were also broken by country.) 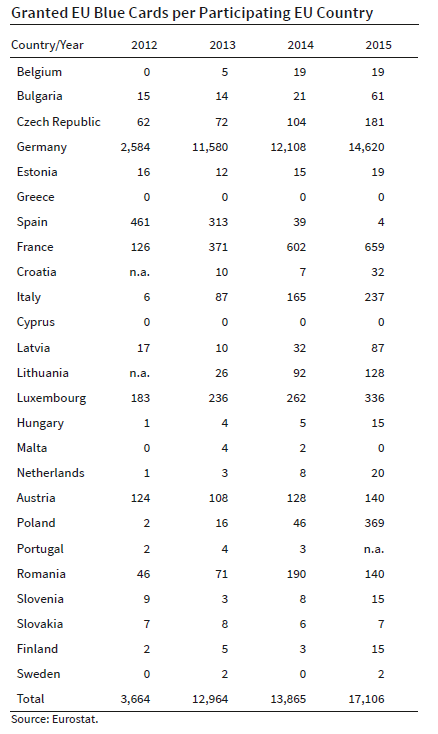 After 2013, when an approximately 4-fold increase happened, over 85% of Blue Cards were issued by Germany.

There's also some extreme weirdness in the data: why did the numbers collapse in Spain? Why they're practically non-existent in Sweden? The paper doesn't have such specific answers... but overall it says:

In 2015 in Belgium, 50,085 national permits were issued compared to 19 Blue Cards; in France, 226,630 compared to 659 Blue Cards; in Sweden, 110,623 compared to two Blue Cards. Thus, in all countries, the amount of national work permits issued is much larger than the amount of Blue Cards granted. [...]
While the EU Commission has set the general rule that the salary threshold should be around 1.5 times the average gross annual salary, member states were free to determine the exact amount.

So basically, countries can "opt out" by setting some ridiculous threshold for the salary. Note that this was before the 2016 reform; the paper is alas unclear as whether countries can still do this. The paper exemplifies with Romania that set a multiplier of 4 (they average salary in Romania is much lower than in Western EU countries), but it still granted some cards... There are also harder to quantify local labor market tests (in 12 of the countries, but the paper doesn't list which precisely) that give precedence to local/nationals over foreign applicants.

Presumably Eurostat has a more complete series, which I have yet to find.

Not the answer you're looking for? Browse other questions tagged european-union immigration employment .

33
What does European Union "freedom of movement" mean, and how much can individual countries restrict intra-EU immigration?
6
How come so many asylum seekers have managed to enter Hungary?
9
How many Americans emigrated into "socialist" countries?
3
How many jobs were created during Obama's presidency?
8
Do any countries have a 100% open immigration policy?
52
Why do Mauritius passport holders have such easy visa access to so many countries?
12
Are there EU countries that offer a path to citizenship for non-EU foreign workers?
2
How many migrants have obtained Convention Against Torture protection under Title 42?
3
How many Afghans have migrated/fled to the (present-day territory of the) EU in the past 25 years? And how many were granted asylum?