Any backlash against Ukrainians working in Poland? What's the Polish public opinion on Ukrainian guest workers?

According to Eurostat, in 2016 the vast majority of new work permits for non-EU citizens were issued by Poland for Ukrainians, nearly half a million such permits.

Bloomberg has a background article but it's mostly from the Ukrainian perspective: shortage of labor at home etc. Blomberg does confirm the data from Eurostat with Ukrainian sources though: 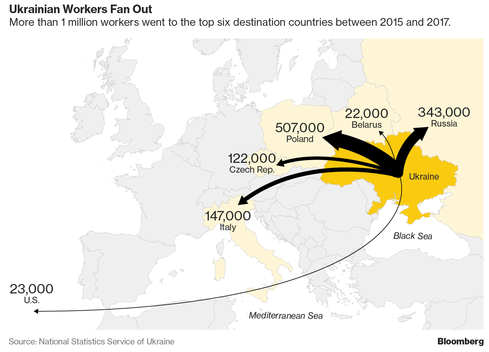 Bloomberg also says that most such permits were of short duration: a few months.

According to a Polish economist cited in a DW article, the actual number of Ukrainian workers in Poland may be 2-3 times higher (1-1.5 million) because of illegal work. Also the same article quotes Polish economists and bankers who are vastly in favor of Ukrainians working in Poland (and who are even worried about Ukrainians deserting Poland for the rest of the EU, since the 90-day visa-free travel to all EU was introduced for Ukrainians.)

Has there been any backlash in Poland (press, politicians etc.) against this "invasion" of Ukrainian workers? Or is there enough labor shortage in Poland itself (whose workers could go to the rest of EU) that rendered the Ukrainians' arrival a non-issue (or even beneficial) politically for almost everyone in Poland? Maybe the short duration of most permits for Ukrainians (assuming that's true) also influenced the public opinion in Poland? What is the prevailing public opinion in Poland on the matter of Ukrainian guest workers, assuming such surveys were conducted?

This should get a more extensive answer, but what I could find in The Economist:

Voters are ambivalent about the newcomers. In a survey in 2016, 63% told CBOS, a pollster, that Ukrainians are good for the economy. But a similar number said the government should restrict the flow of migrants from the east. Meanwhile, government ministers invoke the influx of Ukrainians as an excuse for defying EU demands to accept refugees from the Middle East, saying their country is already shouldering the burden of migration from a war-torn country. In fact, most of the Ukrainians are economic migrants from the country’s peaceful areas. Only a few hundred apply for refugee status in Poland each year, and in 2016 just 16 received it.

In an interesting twist:

A newly established Ukrainian Workers’ Trade Union is asking for amnesty to the Polish government and Polish MPs for Ukrainians working illegally in Poland. The Union proposes a regulation that would give the right to legally stay and work in Poland for all those Ukrainian citizens who register at the province governor’s office of their place of residence. [...]

The demand is supported by the two largest Polish trade unions (OPZZ and NSZZ Solidarność). Activists are also trying to get support from the Polish Ombudsman, the State Labour Inspectorate and the Council of Ministers. The Polish government has already promised to look at the proposal after it is officially submitted to the Ministry of Family, Labour and Social Policy.

I'm guessing the Polish unions support the proposal because illegal workers get paid even less than other Ukrainians, so they drive the pay (even further) down. There's one other article which mentions this issue of wage increase being held back in Poland due to Ukrainian supply, but without clear attribution as to whom expressed this concern:

the average wage of Ukrainians is less than € 500 / month in the Warsaw metropolitan area, which is the region with the highest wages, and it is likely that the overall increase of wages would be higher in Poland without the competition of these foreign workers. This is why some voices are raised in Poland against the massive nature of this temporary immigration from Ukraine, even if the linguistic and cultural proximity between the two peoples greatly facilitates integration and if the presence of Ukrainians does not bring any specific tension. Moreover, the Poles understand quite easily the situation of Ukrainians who emigrate in search of a better salary, since they are traditionally a people of emigrants.

The large OPZZ confederation wants the new trade union to help to protect Ukrainian workers by ensuring that the rules of the International Labour Organization and Poland’s minimum labour standards are applied. In practice, the OPZZ hopes to put an end to competition from Ukrainian workers prepared to work for very low wages, which puts downward pressure on the wages of Polish workers.

In fact it looks like the Ukrainian workers' union was set up with help form the Polish unions (same source):

I also (finally) found something on the political level:

Poland’s “eastern policy” has two broad traditions that crystallised in the interwar period.

The first (called pilsudczykowska, after Pilsudski, the leader of the independent left) assumes supporting Ukraine to counter the risk of expansion of Russian influence closer to Polish territory. The other one (called endecka, from the nationalist movement of National Democracy) treats Ukrainians as eternal historical enemies against whom even alliance with Russia is acceptable. Since Ukraine gained independence in 1991, the Polish political scene has been dominated by a Pilsudski-school consensus. But today, Poland’s “National Democracy” tendency is also making itself heard.

The Prawo i Sprawiedliwosc [Law and Justice] party itself is not decidedly anti-Ukrainian. Officially, it supports Ukraine in its conflict with Russia (although declarations are not followed by concrete action), and there are no significant clashes on the subject of Volhynia between Warsaw and Kiev. Members of the PiS government are also aware of the benefits of the immigration from Ukraine, which they sporadically express in the media. According to the Polish Union of Entrepreneurs, over the next 20 years Poland will need an additional five million people in order to maintain the current level of economic growth.

However, fearing its most radical voters, Prawo i Sprawiedliwosc does not want to appear enthusiastic towards Ukraine or Ukrainian workers. The anti-Ukrainian fraction in the party is also growing stronger. The situation is slightly similar to that in Hungary, where the ruling right-populist party Fidesz was forced to adopt the agenda of the far-right Jobbik party in order to prevent the strengthening of the opposition from the right.

In this sense, Prawo i Sprawiedliwosc does not inflame anti-Ukrainian sentiments itself, but turns a blind eye. As xenophobic attacks are not condemned by the members of the ruling party, it creates conditions under which such hatred can thrive. And such incidents, as the Polish Ombudsman alarms, occur growingly often, even though Poles' attitude towards Ukrainians is, on the whole, much better than their sentiments towards Arabs or Roma people.

The above is from a Polish journalist, whom generally don't dig PiS much (and vice-versa)...

Opinions among my peers (I'm 26, located in Warsaw) is that Ukrainians are OK; however, women are very much afraid of taking Uber rides with them (there are a LOT of Ukrainian Uber drivers). I couldn't imagine a better nation to invade us - it seems that the vast majority of them work and are here to make a living and only a small minority cause trouble.

Nevertheless, those individuals causing trouble are very much worrisome, Ukraine is much poorer than Poland, but once again - this is the best economic invasion from a much poorer country you can get. The problems are due to socio-economic backgrounds, not characteristic of a nation or cultural differences - Ukrainians are hard working and well put, but Ukraine is a poor country and poverty breeds problems.

Not the answer you're looking for? Browse other questions tagged european-union international ukraine poland labor .

17
How could it happen that Ukrainian soldiers did not try to defend against the invasion?
12
Why did Russia start its aggression against Ukraine after the Ukrainian unrest from 2013-2014?
3
Was there any public reaction inside Poland when Poles abroad were asked to report ‘Anti-Polish’ statements?
5
How has public opinion of the European Union changed as a result of the COVID-19 crisis?