What's the ratio of treaties ratified by Congress to other forms of international agreements the US is part of?

There have been relatively few treaties considered by Congress in recent decades, in part because executive agreements and regular legislation have become a more popular way to establish various forms of relations with other countries. And many others were negotiated by various administrations but never ratified by the Senate, largely because of the high bar for approval: The SALT II agreement (another nuclear disarmament treaty with the then-Soviet Union), the Law of the Sea Convention (which was intended to govern the use of the world's oceans), the UN’s Convention to Eliminate All Forms of Discrimination against Women, the Convention on the Rights of Persons with Disabilities and the Kyoto Protocol (which sets greenhouse gas emissions reduction targets to mitigate climate change) have all been sidelined by partisanship.

On the other hand, there's a 2008 paper by Miles and Posner that finds the

and that the US is by far the world leader in the number of such treaties. Miles and Posner's data is from the Washington Treaty Index, and includes only treaties entered into (by the parties) after 1946 (there's no reliable data before, world-wide).

So it looks like there could be a contradiction between the highlighted statements, but there might also be ways for both to be true, e.g. the "backlog" of non-ratified treaties is indeed a relatively new phenomenon, while most treaties are older, and/or executive agreements have supplanted treaties in more recent times, but they are counted as "treaties" in some statistics. To help decide which of these might be the case... we'd need data (preferably over time as well) on three groups:

Basically: how many non-ratified and not-even-needing-ratification treaties/agreements has the US entered, in contrast with ratified treaties?

If found some data in a Congressional report from 2001, but even that is pretty dated:

Cumulatively, in 1989 the United States was a party to 890 treaties and 5,117 executive agreements.

There's also a long trend in the increase of executive agreements vs treaties:

The growth in executive agreements may be accounted for by a number of factors. A primary factor is the sheer increase in volume of the amount of business and contacts between the United States and other countries. Many observers believe it would be impractical to submit every international agreement the United States enters to the Senate as a treaty.

An executive agreement is usually much simpler to conclude or amend than a treaty. The Senate, with an already heavy workload, would quickly find itself overburdened if all international agreements, no matter how minor in importance, were submitted to it for advice and consent.

And they have this detailed table of treaties vs executive agreements: 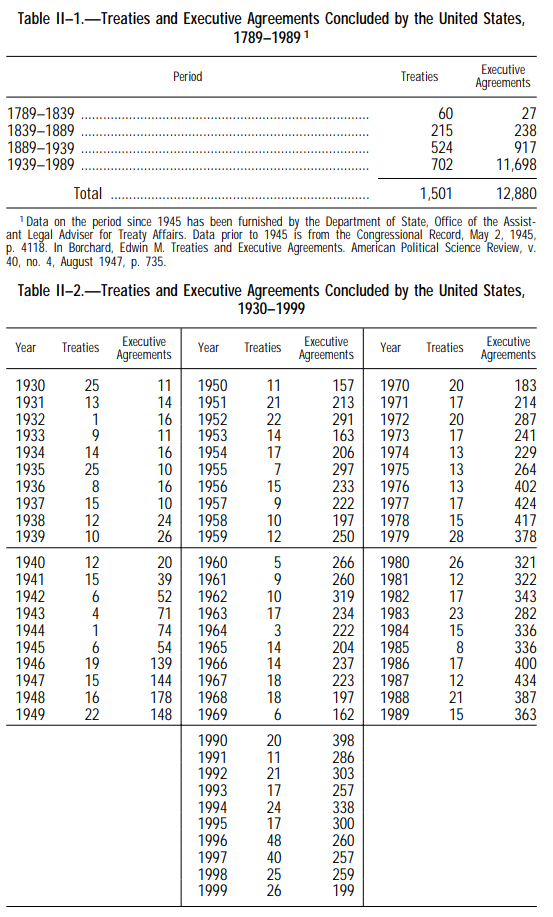 Also, the source of authority for the latter is detailed:

Most executive agreements are concluded under the authority of a statute or prior treaty. In a wide variety of laws Congress has authorized the executive branch to conclude international agreements in fields including foreign aid, agriculture, and mutual security. Similarly, the Senate has approved numerous treaties that implicitly or explicitly authorized further agreement among the parties. As an example, the executive branch has concluded numerous defense and base agreements on the basis of the North Atlantic Treaty and other security treaties. One study found that 88.3 percent of international agreements reached between 1946 and 1972 were based at least partly on statutory authority; 6.2 percent on treaties, and 5.5 percent solely on executive authority.

So basically, the common case nowadays is that Congress "pre-approves" many such executive agreements (which are treaties in international law, even if not in US law--that's also said in the same source) simply by giving the Executive the power to enter into them in specific areas. This common case even has a name: congressional-executive agreements. It started

in 1790 Congress empowered the President to pay off the Revolutionary War debt by borrowing money from foreign countries ‘‘upon terms advantageous to the United States’’ and to conclude ‘‘such other contracts respecting the said debt as shall be found for the interest of the said States.’’ [...]
Over the years, Congress has authorized or sanctioned additional agreements concerning a wide variety of subjects including, inter alia, the protection of intellectual property rights, acquisition of territory, national participation in various international organizations, foreign trade, foreign military assistance, foreign economic assistance, atomic energy cooperation, and international fishery rights.

The subject matter diversity of congressional-executive agreements is matched by the varying means by which Congress has authorized the conclusion of such agreements. Thus, Congress has enacted statutes providing authority in advance for the President to negotiate with other nations on a particular matter. This authority may be explicit, or, in the case of agreements concluded in conformity with a generally enunciated congressional policy, implied from the terms of the enactment. Legislative authorization for congressional-executive agreements may also be effected by passage of a statute following the negotiation of a concluded agreement. Again, congressional approval may be explicit, or, implied, as in the case of legislation appropriating funds to carry out participation by the United States in an international organization.

In regulating the use of congressional-executive agreements, Congress has specified in advance the general terms of negotiation and conditioned the effectiveness of particular agreements alternatively upon the enactment of implementing legislation, upon the legislative adoption of an approving concurrent resolution within a specified time following transmittal of the agreement to Congress, or upon the failure of Congress to adopt a disapproving concurrent or joint resolution within designated time periods. Furthermore, congressional approval of some agreements has been accompanied by conditions. The President is presently required by at least one statute to select Members of Congress from specified committees to serve as accredited advisers to American delegations attending international conferences, meeting, and negotiating sessions relating to trade agreements. Other legislation has required the President to consult with specified committees before entering into trade agreements.

Still, even in the case of multilateral agreements, the ratio of executive agreements to (US-law) treaties is about 2:1.

The Senate actually has a list of pending treaties. Currently there are 44 on that list, including very old ones like the Vienna Convention (signed in 1970). It's alas not entirely straightforward to compare that number with with those in previous paragraphs because of how old the data above is, but clearly it's a pretty small fraction of the 700-1,500 treaties (depending on the time frame) that the Senate has ratified. Furthermore, looking at that list there is a significant time-break around position #20, where the older treaties are from around year 2000 or before, while the entries in the 2nd half of the list are much newer, post-2008 or so. In my rough estimation, about half of the treaties listed there are fairly "intractable" for the Senate; the rest looks a bit more like a "regular" backlog of treaties that might still pass.

Not the answer you're looking for? Browse other questions tagged united-states congress international-relations treaty executive .

66
Is the US unusually prone to walking away from signed treaties/accords?
19
Can USA exit a treaty that was signed and ratified?

13
What would it take for the U.S. to ratify the Convention on the Rights of the Child?
27
Why has the United States not signed and ratified the International Criminal Court?
2
Article II, section 2, clause 2; and listing(s) of relevent treaties
66
Is the US unusually prone to walking away from signed treaties/accords?
6
How many treaties ratified by Congress did the US exit unilaterally?
1
Why is it frequently claimed that the US 'signed' a given treaty before it's been ratified by Congress?
2
Has there been identifiable tension against the Outer Space Treaty or other key "idealistic" treaties regarding space flight?
8
Brexit: In what specific ways is the UK government planning to break international law (previous agreements)?
11
Is the US administration obligated in any way to follow previous international agreements?