What are the steps for a person to become a US Ambassador, after the nomination?

I have heard on radio about the US Ambassador in Romania, Hans Klemm, being recalled to Washington:

US Ambassador Hans Klemm will be recalled to Washington, Romanian FM Teodor Melescanu has confirmed on Monday evening. Melescanu said the evaluation of Klemm’s activity here in Bucharest belongs to the US Department of State.

The news also mentioned take it might take several months for US to send another ambassador and I am wondering why so much. Are there many bureaucratic steps a person must face in order to actually become an Ambassador?

Question: What are the steps for a person to become an US Ambassador? (starting with nominations, basically the steps after the ones nicely described here)

Basically, the President has to nominate a new ambassador and the Senate has to confirm the nomination. Article II Section 2 of the US Constitution states:

The following steps assume that the nominee has already become a Foreign Service Officer (for career diplomats) or is close to the President (for political appointees) and is nominated by the President.

Firstly, the nominee has to fill up all the necessary paperwork which includes "financial disclosure forms, questionnaires from senators, background documents, security forms and more".

"If the decision is made by the State Department, in coordination with the White House, to nominate you for an ambassadorship, the next thing that happens is you get about a half a truckload of paper," he noted.

Secondly, government officials then vet the documents and the candidate. If nothing goes wrong, they inform the host country of the nominated ambassador (a process called agrément).

Thirdly, if the host country does not object (it is rare that they object), the nomination is submitted to the Senate Foreign Relations Committee and the nominee gets a hearing. Since it depends on the committee whether to hold hearings, nominations sometimes expire at the end of a Congress before they are even considered. Or in other times, hearings are held but delayed for a long period of time.

Fourthly, when the committee approves the nominee through a committee vote, the nomination goes to the full Senate floor for a vote. Again, Senators can force up to 30 hours of floor debate per nominee which can delay the floor vote.

For further information, check out State of play: Becoming an ambassador takes time -- and paperwork.

Here's a simplified timeline of the steps to become an ambassador, taken from the US Embassy to the Holy See site. 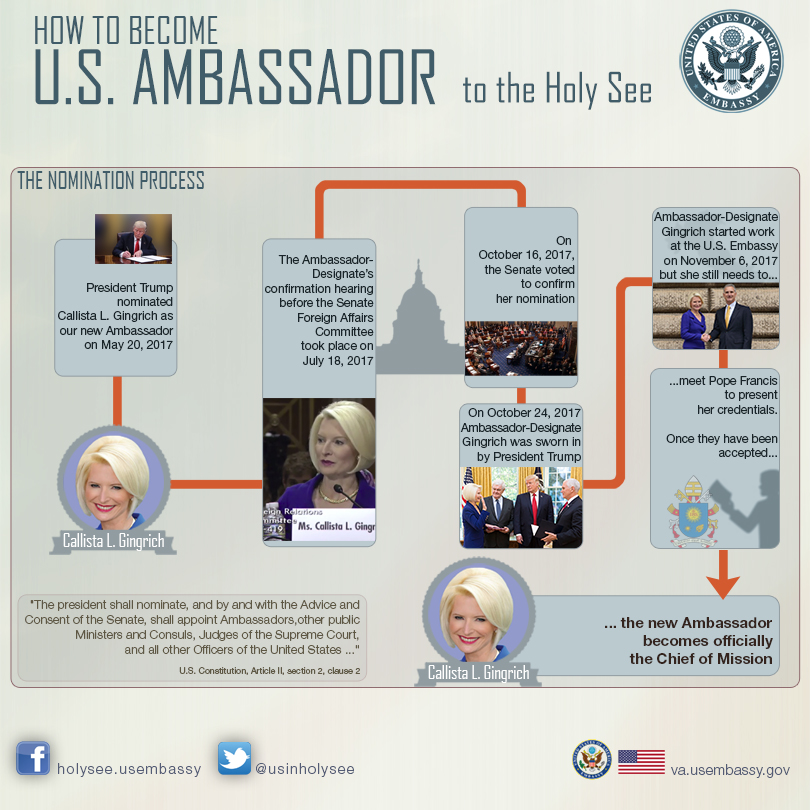 I think the long delay is due to bureaucratic/political process.

First, the president must nominate someone for the post; he will either ask the US Department of State for a list of candidates that will fit the job (career diplomats) , or just select someone (political appointment).

The candidate must then be confirmed by the US senate; depending on the candidate, the confirmation process can be simple if there is a consensus between all senators on the merit of the candidate, or it can a long process if there are dissensions between the senators.

Step 1: Donate millions of dollars to the candidate of your choice.

Step 3: Get nominated as ambassador.

Helpful hint: Read the Wikipedia entry for your country before your Senate confirmation hearings.

Note: The more money you give, the nicer the country you can be ambassador to.

Not the answer you're looking for? Browse other questions tagged united-states embassy state-department .

20
What are the conditions required for a territory to become part of United States?
5
What steps need to happen for the alternative vote to be implemented?
5
Why are there so many superdelegates in the nomination process for President of the United States?
11
What steps are required for the successful legal secession of California from the United States?
1
Under what conditions can US influence legislative process in another country?
6
Why have three politicans in high positions resigned to become the US Ambassador to China?
2
What are the requirements for a Democratic nomination in primaries?
20
How come there are so many candidates for the 2020 Democratic party presidential nomination?
0
What is the “drug deal” Ambassador Bolton refers to?
2
What are the steps to fill a vacancy for vice president?