Is there bias against Israel at the UN and mainstream media?

According to UN Watch:

"UN committees, annual UN resolutions, an entire UN bureaucratic division, permanent UN exhibits in New York and Geneva headquarters -- all dedicated to a relentless and virulent propaganda war against the Jewish state. Together, they have made the UN into Ground Zero for today's new anti-Semitism, which is the irrational scapegoating of Israel with the true intended target being Jews. Not only do these anti-Israel measures incite hatred against Israelis and Jews everywhere, but they have done not a thing to help the Palestinian situation. On the contrary: they give strength and succor to extremists.

Paradoxically, one of the greatest violators of the UN Charter's equality guarantee has been the UN body charged with establishing and enforcing international human rights, the Human Rights Council."

There's one widespread image in pro-Israel sites depicting bias in UN though I couldn't find link to Sun News video where this image was taken from: 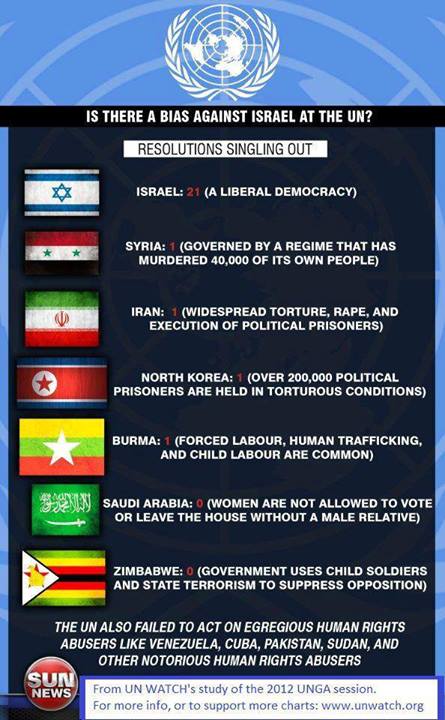 And speaking about bias at mainstream media there's an article in Wikipedia about Media coverage of the Arab–Israeli conflict but it's contradictory because it consists claims of bias from both pro-Palestinian and Pro-Israel watchdog groups.

united-nations israel
Share
Improve this question
asked May 30 '14 at 11:26

Much of the anti-Israel sentiment is from the UN human rights council, which is probably one of the most hypocritical entities to ever exist. The UN is biased against Israel because there are a lot of countries that are members that have pledged or are OK with Israel being wiped off the map. Media bias for or against Israel tends to follow the political slant of that company.

It's hard to say if there's bias; the UN would most probably say there isn't, and Israel would most definitely claim there is. Their relationship has been rather difficult in the past, including an event in which Israel blew up a UN observation post killing four unarmed peacekeepers - possibly by mistake, possibly not.

I've seen a documentary (that I unfortunately can't now find so I could link to it) where they said that children in Israel are taught in schools that everyone in the whole world hates them, and they grow up believing that. The same thing seems to be happening (allegedly) in Russia nowadays, where everything that doesn't fit the state's official stance on things is deemed western propaganda. Then again, both of these claims might really be exactly that.

That's a very good point.Roughly statistically speaking there is indeed a bias. Now to explain it isn't too easy. It could be that apart the U.S, Israel has in fact very few allies - in fact probably zero allies - and at the opposite most other countries are involved in alliances and geopolitical local dynamics that makes hard to find a consensus to condemn them.

eg: Israel is alone and isolated and so at the U.N everybody agree to condemn them.

Not the answer you're looking for? Browse other questions tagged united-nations israel .

0
What is USA's position on the Israeli-Palestinian conflict?

14
Is there a Muslim majority country where Israel (and Jews) is received positively?
2
What is the matter with Iran and Israel?
53
Why did Israel vote against lifting the American embargo on Cuba?