Do Republicans spend more on advertising while Democrats do more canvassing?

Recently I was chatting with a leader in one of my local political parties. They said something interesting that I hadn't heard before:

Is this true? If so, why do they have different strategies?

In the age of Facebook and targeted marketing it's not clear if that distinction (ads vs in-person) is that clear. From a 2013 news piece on the change in GOP strategy:

Instead of dumping millions into television ads and get-out-the-vote efforts in the final 90 days of campaigns as it usually does, the RNC is looking to invest in infrastructure far ahead of election years.

"Things have changed. That strategy is both outdated and ineffective," RNC Communications Director Sean Spicer said in the memo.

"That's why Chairman Priebus has changed the role of the RNC. The lesson from 2012 is we must have a permanent ground game."

The RNC also announced Monday it is pouring money into improving its target-marketing infrastructure, which it says can help it better appeal to sympathetic voters online and through direct mail. On the forefront of digital strategy in the early 2000s, the Republican party was eclipsed by the Obama campaign in 2008. Republican strategist Karl Rove, who was behind the GOP's early pushes to target voters more directly, argues that the Obama campaign commanded an "army of computer engineers and mathematicians" to create a "huge data advantage over Republicans."

Although I could not find specifics about door-to-door, but there's also a 2013 breakout of campaign expenditure... which shows only slight differences in funds allocation: 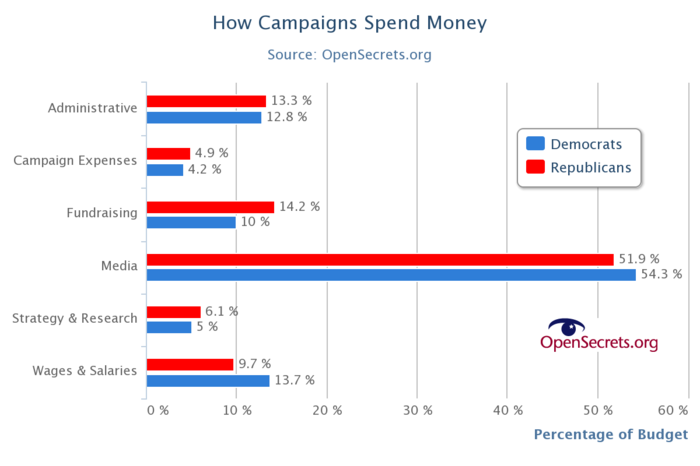 Republican campaigns rely more heavily on direct mail, Democrats on new media. Perhaps reflecting party demographics, Democrats and Republicans favored different methods of reaching out to voters. Republican campaigns put 13.6 percent of their money into direct mail versus 9.4 percent for Democratic candidates; Democrats, meanwhile, spent almost three times as much on Web advertising as Republicans (2.6 percent to 0.9 percent). While that figure reflects all cycles since 2002, the gap in Web spending was actually even larger in the past cycle — a fact that probably comes as no surprise to Republican consultants who rued the GOP’s lack of web presence in the aftermath of Mitt Romney’s loss. Even in 2012, however, traditional media reigned supreme: web advertising was barely 10 percent of Democratic candidates’ media budget.

Ultimately, the spending habits of Democratic and Republican campaigns were fairly similar. Both spent more than half of their funds on media, smaller chunks of money on fundraising, salaries, and administrative expenses, and the remainder on campaign and strategy expenses. The resemblance even extends to spending on big subcategories like polling and surveys (1.9 percent for Republicans, 2.2 percent for Democrats) and travel and lodging (4.5 percent for Republicans, 4.8 percent for Democrats). Whatever else may divide them, Democratic and Republican candidates appear to run their races using the same basic playbook.

That analysis is probably no longer applicable to present day in view of the changes from the first half of my answer, but interesting historically.

Although I could not find comparative stats on door-to-door canvassing, the modern version of that also uses computer screening of the targets.

Political door knocking is now a data-driven operation, making it as critical a piece of high tech campaign strategies as the endless fundraising solicitations delivered daily to supporters' inboxes.

Canvassers only go to targeted households identified by algorithms using early voting/absentee voting data, party registration, voting history, and other micro-targeting information that create a stronger profile of a person or household's likelihood to vote for their own candidates.[...]

Recognizing how detrimental this and other statewide losses were, local campaigns, the state party, and national Republicans combined efforts, including employing a smartphone app called "Advantage" to increase accuracy and productivity of door knocking this year. [...]

Republican volunteers walk in groups of two or three, with one person solely dedicated to updating the app and directing the others towards houses with information on who lives there, biographical data and voting status.

If the person is home and a conversation is had (so far, no technology to improve that), they immediately update the app based on the talk that's transmitted to the party in real time, who can change their models and update their current map of houses before they even knock on the next door.

Democrats use similar data to target voters but still use clipboards, known as "turf packs" to write down responses and input them later into a computer.

What's clear from the last presidential election is that Trump's campaign (through various groups) was the largest advertiser on Facebook. That corroborates with what @hszmv found i.e. Trump spent $39 million in TV advertisement and $29 Million in digital advertisement, whereas Hilary Clinton spent $72 million and respectively $16 million. Note however that only a small fraction of Trumps' campaign "digital budget" went directly to Facebook--less than a half a million dollars. I don't know about their accompanying analytical efforts, I couldn't find expenditure numbers on that. Also note that these number found by hszmv are just for some "last push" in the campaign. The total numbers for the whole campaign are larger: Trump $194.9 million for "media", corresponding to 58.5% of expenditures vs Clinton $226.M (58.2%). (This does not include PACs.) The percentages for [direct] media expenditure are thus nearly identical for the two campaigns at ~58%. (There's no info on on-line vs other kinds for these total pies.)

1
Can a super PAC give to both democrats and republicans?
25
Is it true that Republicans have an unfair geographical advantage in elections for the House of Representatives?
31
Why don't Democrats and Republicans collude?
5
Why does the FIRST STEP Act have bipartisan support?
0
Is it tradition for the US President to nominate the apposing party leadership's suggestions for 2 opposite party FCC commissioners?
12
Are there more Democrats than Republicans in the United States?
43
Why do politicians create more advertising badmouthing their opponents, rather than promoting themselves?
4
Why are Democrats more likely to vote by mail than Republicans?